He will be forever held in Scottish folklore as the warrior king who defeated the auld enemy from south of Hadrians Wall. He was a leader of men who brought together the clans of the lowlands and highlands to defeat the English army and give Scotland her independence from their overly aggressive southern neighbour. His name is Robert The Bruce and he will forever be revered in the hearts and minds of Scottish people as a national hero.

Robert was the eldest of ten siblings born into a wealthy land owning family who bestowed onto him the title of the Earl Of Carrick. His royal ancestry can be traced back to his paternal fourth great-grandfather King David I of Scotland who ruled from 1124 to 1153. His maternal antecedents were of Gaelic origins.

Scotland was a feudal society and the Bruce clan had their enemies most notably John Comyn II the Earl of Buchan and his clan. In a power play the Comyns and their allies attacked and seized Roberts fathers estates in Carrick and Annandale. This was a move to lay a claim for the Scottish throne, currently occupied by the Comyn supported King John, and it forced the Bruce's to flee south of the border to take refuge in Carlisle.

The Comyn's followed and attacked the walled city of Carlisle on 26th March 1296. Their motive was to eliminate any possible rival to the Scottish crown with their sights set on the head of Robert and his siblings. Wreaking death and destruction upon any unfortunate Englishmen in Carlisle was just an added bonus to them. The attack was repelled but the English planned to avenge this aggression in kind.

Edward I of England struck back taking castle after castle and defeating king John at the battle of Dunbar. Although the Bruces' got their estates back some things did not sit right with young Robert and he would later join the uprising in 1298.

William Wallace had led the Scottish forces during the first war for Scottish independence and inflicted a heavy defeat on the English army at the Battle of Stirling Bridge on 11th September 1297. This victory inspired Robert The Bruce to join forces with Wallace but the brave Scots were defeated at the Battle of Falkirk on 22nd July 1298.

After the battle of Stirling Bridge, William Wallace had been given the post of Guardian of the Kingdom of Scotland. After the Falkirk defeat he resigned from this position and was succeeded by Robert the Bruce and John Comyn III who both shared this eminent title.

Although defeated at the Battle Of Falkirk, Robert had felt the passion of battle when fighting for a common cause of independence and he was one of the few remaining rightful heirs to the Scottish throne. He still had a formidable rival in John Comyn III but despite the animosity between the two they tried to form an alliance against the English crown although trust was always an issue.

Betrayal was a constant danger with the consequences of capture guaranteeing a grim path to the grave. In 1305 William Wallace was betrayed by a Scottish knight called John de Menteith. His fate was gruesome, Wallace was stripped naked and dragged by a horse through London. Following this he was disemboweled and finally hanged, drawn and quartered. During the fight for independence the English captured and executed three of Robert The Bruce's brothers: Thomas, Alexander and Neil with the latter suffering the grisly fate of being hanged, drawn and quartered.

On a visit to England Bruce received a message that Longshanks' (Edward I) men were coming for him, he escaped just in time and suspected betrayal by Comyn. He arranged a meeting with his old adversary and supposed ally at Greyfriars Church, Dumfries on 10th February 1306. The atmosphere was tense, voices were raised and after a heated argument swords were drawn. Once the dust had settled, it was the Bruce clan who were the only men left standing that day in Greyfriars.

Within six weeks Bruce was crowned King Of The Scots but still his struggle would continue for 8 years until the epic and climactic Battle Of Bannockburn where the English were put to the Scottish sword.

The rocky road to absolute autonomy is never easy and valuable lessons are often learned en-route. After defeat at the Battle of Methven on 19th June 1306, Robert The Bruce sought refuge in a cave where he drew inspiration from an arachnid. While the king was laying low, he observed a spider failing but relentlessly continuing in spinning its web to the caves ceiling until it finally succeeded. He saw the natural instinct of the spider to continue and never give up. This gave him the spirit to continue the fight for independence.

Leading up to Bannockburn, the armies of Bruce gained a series of impressive victories against both the English and their allies. Most of the Scottish castles had been recaptured and were now under the Scottish crown. The Scots were now raiding towns and castles in Northern England much to the chagrin of the English king. There was a new king on the throne of England and the response of Edward II was swift. He raised an army of 20,000 men to go north and confront the Scottish forces of Bruce. The scene was set, Bannockburn would be the theatre of war and the outcome would be resolved during 23rd & 24th June 1314.

At the start of the Battle Of Bannockburn Robert The Bruce proved his mettle as he was said to have broken his axe whilst engaged in battle with an unfortunate English knight called Sir Henry de Bohun whose iron helmet and skull were both split in two. The battle raged on for two days, it was Scottish determination and English ineffectual leadership that were the decisive factors. Edward II was forced to flee and barely escaped with his life as marauding Scots gave no quarter in a definitive victory.

Bannockburn was a glorious victory and one that would be celebrated in Scotland for centuries to come. Robert The Bruce became immortalised in the annals of Scottish history as the king who finally routed the English. Although Edward II never gave up hope of recapturing Scotland, there was to be no further major battles on Scottish soil during the reign of Bruce. King Robert was to look forward to a further 15 years of a relatively peaceful rule until his 1329 death.

Statues of Bruce have been set into the entrance walls of both Stirling and Edinburgh castles. Many other statues are located at various towns and cities across Scotland.

Great leaders who influence their people with their actions will see the same people hang off their every word deciphering its exact meaning for motivation and inspiration. So this is my compilation of 10 of the best Robert The Bruce quotes.

Quotes About Robert The Bruce

Sir Hugh de Cressingham, the treasurer of the English administration in Scotland was quoted as saying to Edward I about Bruce: "If you had the earl of Carrick, the Steward of Scotland and his brother...you would think your business done"

An eminent Professor of Scottish History Dauvit Broun made this observation: "It’s impossible to know if Bruce was serious about keeping the peace, however it seems likely that he would have known that Edward was coming north to escape trouble in England as much as to assert control over Scotland. This could be seen as an attempt at fishing to see how Edward would react"

The Scottish historian Fiona Watson made this assessment: "He was absolutely consistent in his desire to fulfill what he thought was his family's right and destiny to sit on the throne of Scotland. Everything he did was geared towards getting the crown. He was profoundly ambitious" 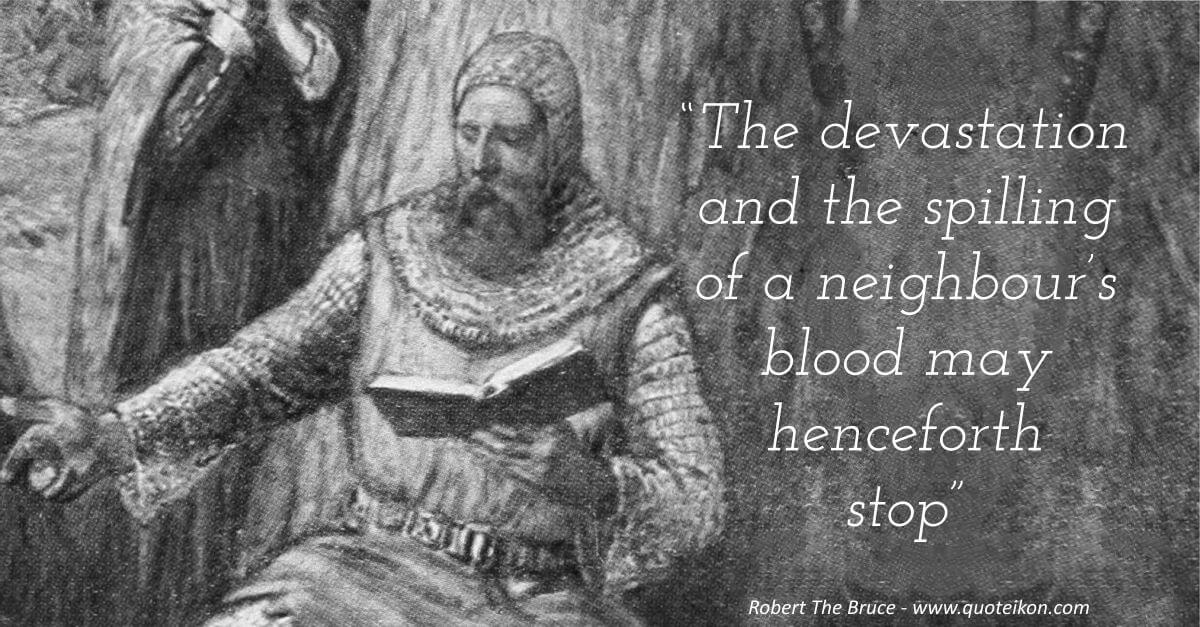