Long considered one of the finest poets in English literature William Wordsworth was also one of the prime movers in generating traction for the English romantic movement that was bursting to replace the stale stench of the establishments priggish poetic style at the end of the eighteenth century.

Wordsworth recognised that complex verse did little to stimulate the ordinary man and longed for a simpler style that could bridge the literary gap from the gentry to the commoner.

During the years 1791 and 1792 Wordsworth lived in France and was first inspired by the French Revolution as he immersed himself in the culture of a peoples insurrection and then left disillusioned as he witnessed the bloody "reign of terror" where street lynchings became the order of the day. He wanted his own revolution and chose literature and specifically poetry to be the battlefield for poetic change.

Wordsworth was unimpressed by the exclusivity of established poetry that was written by academics for the learned but had zero meaning for the common man. He longed for simplified verse that could appeal to all and in his collaboration with his colleague Samuel Taylor Coleridge they published in 1798 "Lyrical Ballads" which William Wordsworth was quoted as describing thus: "They were written chiefly with a view to ascertain how far the language of conversation in the middle and lower classes of society is adapted to the purpose of poetic pleasure".

A new poetic era was dawning and Wordsworth went on to create many more inspiring works including one of my favourite poems "As I Wandered Lonely As A Cloud" or as it is more commonly known simply as "Daffodils". His masterpiece was undoubtedly "The Prelude" which he started in 1798 and became his life's work which he kept adding to and amending, it was his wife who first published it posthumously in 1850.

In an odd turn of events William's seven year reign as the United Kingdoms Poet Laureate was remarkable by the fact that he actually contributed no official poems during his tenure.

Wordsworth's body of works weaves the essence of man with the beauty of the natural world of the Lake District where he became known as one of "The Lake Poets" along with Coleridge and Robert Southey who also resided there. The simple meaning and beauty of his poetry inspired generations of eloquent wordsmiths and he was also good for a one liner so here is my compilation of 21 of the best William Wordsworth quotes

Bertrand Russell commented on the politics of his poetry: "In his youth Wordsworth sympathized with the French Revolution, went to France, wrote good poetry, and had a natural daughter. At this period he was called a "bad" man. Then he became "good", abandoned his daughter, adopted correct principles, and wrote bad poetry"

The literary critic William Hazlitt said of his poetry: "The vulgar do not read them; the learned, who see all things through books, do not understand them; the great despise. The fashionable may ridicule them: but the author has created himself an interest in the heart of the retired and lonely student of nature, which can never die"

Oscar Wilde gave a cryptic assessment: "Wordsworth went to the lakes, but he was never a lake poet. He found in stones the sermons he had already hidden there"

Percy Bysshe Shelley gave a contrasting appreciative view: "What a beastly and pitiful wretch that Wordsworth! That such a man should be such a poet! I can compare him with no one but Simonides, that flatterer of the Sicilian tyrants, and at the same time the most natural and tender of lyric poets"

However Lord Byron was definitely not impressed as unceremoniously rearranged his name: "Southey and Turdsworth such renegado rascals" 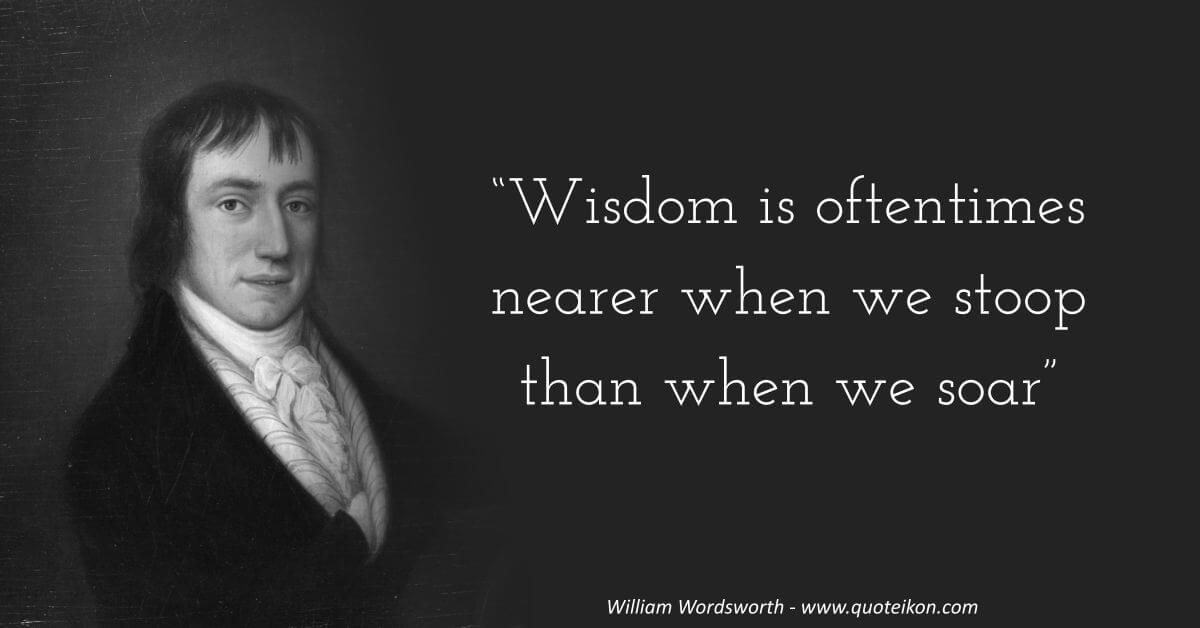