Few presidents have inspired the nation more than Abraham Lincoln did during his term in office that saw him gain the respect of millions with his legacy of emancipation for all as he drew on the statement: "all men are created equal" from what was previously signed into the 1776 declaration of independence.

In what was the most challenging political period in U.S. history Abraham Lincoln took the bull of slavery by the horns and by doing so subjected his young country to the bloodiest civil conflict in North American history. The south rose up against the government over the proposed abolition of slavery demanding secession from the Union of states who, led by Lincoln, stood their ground to fight and win a war that would reverberate around the world for the right reasons of liberty for the individual.

In 1863 during the height of the hostilities Lincoln stood on a platform to give a short speech which was meant as an addendum following the main speaker of the day, Edward Everett, and he delivered what is now known as the Gettysburg Address. Using just 271 words it has become the most iconic speech in American history. Remembering the fallen during the Battle of Gettysburg he referred to the declaration of independence by saying: "our fathers brought forth on this continent, a new nation, conceived in Liberty, and dedicated to the proposition that all men are created equal".

True to his word in 1865 the Confederate forces of the South surrendered and 4 million slaves had gained their liberty. As a man he was a calm, cool and collected leader who was a loyal servant to the state without holding the airs, graces and arrogance that can be associated with positions of power. When Lincoln took the reins of power he brought a sincerity to the highest office that had not been seen before. He was honest and to the point but he also had an abundance of common sense that rarely saw him make a bad decision.

His professional reputation had earned him the moniker "Honest Abe" that even his enemies begrudgingly admitted was an apt nickname. He treated everyone with the same respect and even in the most tense moments of political stress he kept his nerve while many around him were losing theirs.

As a President, Lincoln was a humble but revered Statesman in every sense, he had aspired to and then attained the highest office in the land through his pragmatism and professional ethics that saw him succeed in every official position he held whilst climbing the slippery pole of American politics. His success was built on a solid platform of integrity from where his decisive decision making saw him stand out as an honourable leader that was always destined to head the nation.

Abraham Lincoln brought about a change for the betterment of mankind, but this also created many enemies opposed to this change and consequently he paid the ultimate price as an assassins bullet cut him down on 14th April 1865 just five days after the Confederate surrender. With this cowardly act, Lincoln became the first U.S. president to be assassinated and in many ways it consolidated the Unions victory as it sent shock waves of grief through the country which resulted in a determination to honour the resolve their president had shown through his policies of emancipation.

The greatest legacy of Abraham Lincoln was the preservation of the Union through the abolition of slavery which was in essence an act of defence of democracy itself. There were many more great achievements under Lincoln's tenure at The Whitehouse that are often overlooked including important bills passed into legislation that bequeathed huge ramifications that reverberated into the twentieth century.

The Homestead Act signed by Lincoln in 1862 was the gateway to the American dream, it was responsible for granting in excess of 250 million acres of land to millions of new settlers over the course of a century. Lincoln also signed the Pacific Railway Act of 1862 that eventually saw the first transcontinental railroad and telegraph line to link the east and west coasts.

Lincoln was a well read man who wrote all his own speeches, he was an eloquent speaker who was well respected by a broad section of society who appreciated his ideals and understood the reasoning behind his policies. His calm demeanour during a crisis saw him through the most turbulent period of North American political history that has led him to be often cited as the greatest U.S. president ever. He was also droll and quick witted with his words of wisdom which I have used to compile this list of 25 of the best Abraham Lincoln quotes

Senator Charles Sumner referred to his Gettysburg Address speech with great reverence: "The world noted at once what he said, and will never cease to remember it. The battle itself was less important than the speech"

The U.S. senator Chauncey Depew described him thus: "The characteristic which struck me most was his superabundance of common sense. His power of managing men, of deciding and avoiding difficult questions, surpassed that of any man I ever met"

Martin Luther King Jr. was inspired to say: "Love transforms with redemptive power. Lincoln tried love and left for all history a magnificent drama of reconciliation"

The author Benjamin Creme shared this observation: "There are people who always want to get rid of anyone who is doing good for the world - like Martin Luther King, or President Kennedy; it always happens. Abraham Lincoln was assassinated because he had a vision of right relationships for humanity."

The historian Don Doyle gave this assessment: "When Lincoln, in the darkest days of the war, referred to America as the 'last best hope of earth', he was hardly boasting"

The abolitionist Frederick Douglass sensed the fairness in his demeanour: "He treated me as a man... He did not let me feel for a moment that there was any difference in the colour of our skins" 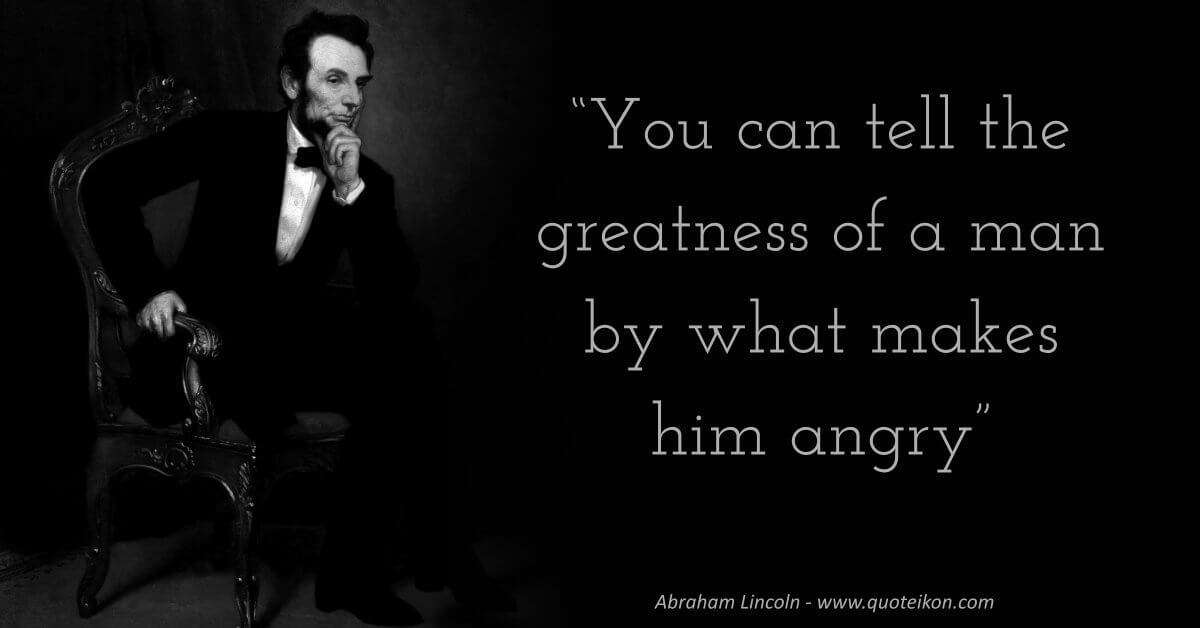