Qi Baishi was born into a poor agricultural family in Hunan province in 1864 and growing up he knew he wanted to be an artist and felt that farming was not suited to him so he secured work as an apprentice carpenter to fund his lifestyle as a part time artist.

Little did he know that he was to become the most prominent Chinese artist of the 20th century whose work would posthumously propel him into the $100 million U.S. dollar club. He became the first Chinese artist to join this illustrious club when his Twelve Landscape Screens (1925) sold for $141 million at Poly Auctions in Beijing in 2017

He joins a who's who of the greats from the world of art whose paintings have exceeded $100 million including; Andy Warhol, Claude Monet, Francis Bacon, Gustav Klimt, Pablo Picasso, Paul Gauguin, Peter Paul Rubens, Rembrandt and Vincent Van Gogh.

His 1946 painting Eagles On Pine Tree sold for $65 million in 2011 however the buyer had doubts about the paintings authenticity so reneged on his offer.

Throughout his life it is estimated that he created in excess of 10,000 distinct works of art yet Chinese auction houses have been inundated with works attributed to Baishi with over 18,000 attempted sales thus highlighting the forgery market in top end Chinese art.

Qi has 3,000 works of art housed in museums and art galleries around the world making him the most internationally recognised Chinese artist of the 20th century.

Although magic flowed from his brush to the canvas he was also an accomplished poet who consistently captured the human side of Chinese culture in both art forms. Away from the easel he was quick witted and good for a one liner so here is my compilation of 10 of the best Qi Baishi quotes

Chairman Mao Zedong wrote a letter of artistic appreciation to Qi Bashi: "I thank you heartily for the gift of your scroll painting Pu tian tong qing (Joyous Celebration for All in Heaven), which I have received. I would like to express my gratitude to all your co-creators [of the masterpiece]: Messrs. Xu Shixue, Yu Feian, Wang Shensheng, Hu Peiheng, Pu Yizai, Pu Xuezai and Guan Songfang"

The head of the Hunan Provincial Museum's art department Liu Gang was impressed to say: "With a stroke of his brush, Qi Baishi was able to transform ordinary objects into art forms. Qi's paintings make you feel a sense of familiarity, while also serving as a source of artistic inspiration"

Anne Shih, chairwoman of the board at Bowers Museum used the terminology of Qi Baishi to describe his modern audience: "His paintings are enjoyed by the vulgar and admired by the refined as well" 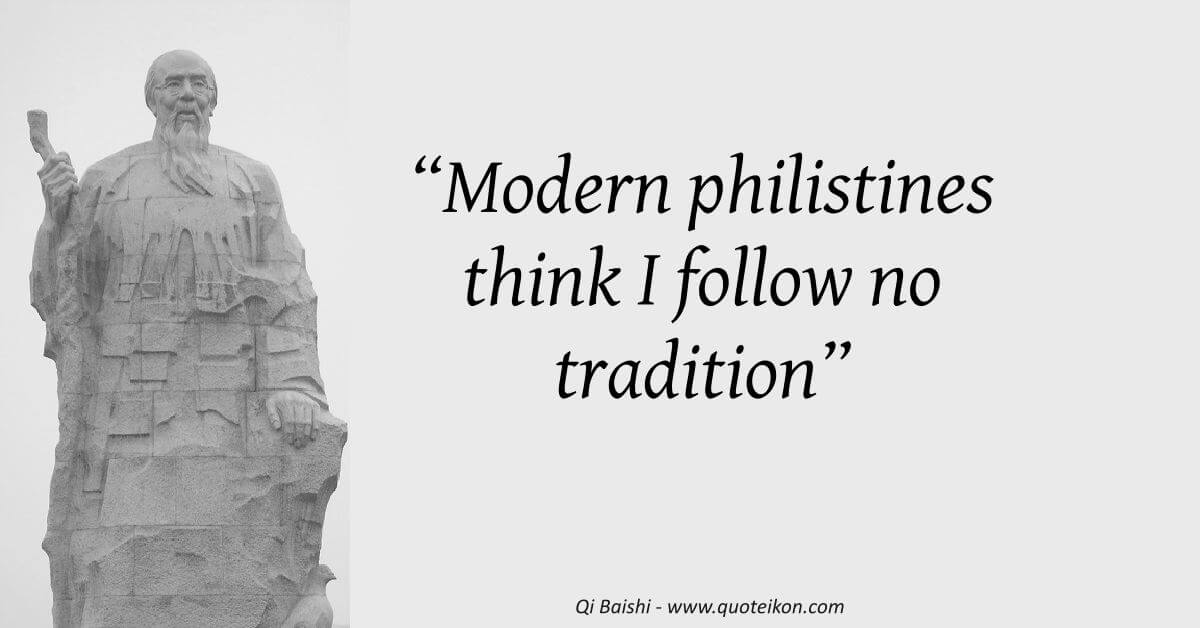