Born in Paris but raised in Normandy Claude Monet drew artistic inspiration from both locations as he led the vanguard of French impressionism with his masterful brush strokes that captured the essence of the natural world.

From his humble beginnings sketching and selling caricatures during his teenage years his natural talent for art was evident. As he learnt the finer points of his trade through the tutelage given by Dutch landscapist Johan Jongkind and the Swiss artist Charles Gleyre it seemed he was destined for a bright future.

Yet his rise to prominence was not an easy path as the established circles of the art world failed to appreciate his talent. After Monet and several of his contemporaries set up an independent exhibition in 1874 it was with great irony that the scorn from critics about his paintings would prove to be the catalyst that spawned a new artistic movement.

The Parisian newspaper Le Charivari ran a scathing review by critic Louis Leroy who fiercely criticised the exhibition with his ire focussing on Monet's 1873 painting "Impression, Sunrise". He mockingly coined the term "Impressionism" which was gleefully accepted as the stance to maintain the status quo of the upper echelons of the artistic establishment.

But Monet and his peers turned the tables on the establishment by adopting the term Impressionism as their own. One by one the critics became admirers as the quality of the art this group produced was too good to be ignored for the wrong reasons of denying the progress of change.

Monet adopted an approach to art that could capture the atmosphere of a landscape. He habitually painted the same scene at different times of the year to capture the ever changing light, shadows and seasonal colours. He often had many easels carrying canvases for different times of the day and he would take all back to his studio to be reworked into the finished artwork.

His house in Giverny had substantial grounds for which he employed some of the finest landscape gardeners to create an environment suitable to cultivate his artistic imagination.

In his later years he would focus on painting in his garden which produced a fascinating series of his works including his picturesque lily pond series where he slavishly squeezed every last drop of his artistic inspiration to produce a set of paintings now housed in their own gallery at the Orangerie in Paris.

His other works adorn the walls of some of the finest galleries around the world including The Hermitage in St Petersburg, The Museum of Modern Art in New York and the National Gallery in London.

On 14th May 2019 at Sothebys auction house in New York, Monet joined the 100 million dollar club when his 1890 painting "Meules" sold for $110 million dollars. Meules was part of the Haystack series of paintings that the artist created in the vicinity of his Giverny home.

He often said that his brush is his witness to the delights of the natural world. But the brush of this artist was more than that, it was a wand that a compelling conductor weaved to create a choral canto on canvas. Or as Claude Monet himself famously said: "I like to paint as a bird sings". Indeed he did, this was an artistic genius capturing the essence of nature in oils and pastels.

Away from the easel he was quick with a quip too, so this is my compilation of 20 of the best Claude Monet quotes

The artist Paul Cézanne recognised the talent and said admiringly: "But what an eye Monet has, the most prodigious eye since painting began! I raise my hat to him"

Fellow artist and friend Camille Pissarro was filled with envy to say: "People want nothing but 'Monet's', apparently he can't paint enough pictures to meet the demand. Worst of all they all want 'Sheaves in the Setting Sun'! always the same story, everything he does goes to America at prices of four, five and six thousand francs"

Art historian Helen Gardner described him thus: "Monet, with a scientific precision, has given us an unparalleled and unexcelled record of the passing of time as seen in the movement of light over identical forms" 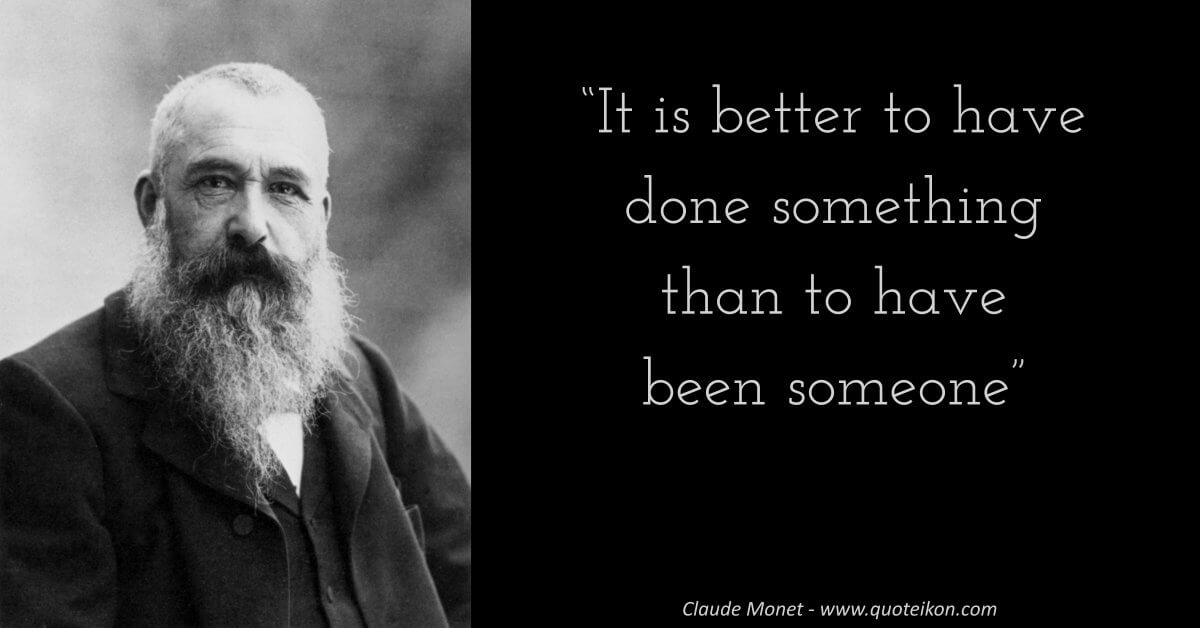