Imagine meeting Vincent van Gogh. What would you say? What Would you do? Me? I'd crack a joke about his missing ear and my missing ear lobe. When my feeble attempt at bonding was met with derision I would retreat into the safety of admiration of his artistic legacy. And what a legacy it is.

Can you imagine telling Vincent that his body of work would go on to become one of the most recognisable collections in the history of art? Just imagine his reaction when you tell him he is often cited as the most famous artist of the nineteenth century. Let the space time continuum be damned, if I could travel back in time then van Gogh circa 1890 is my first port of call.

Gaining posthumous appreciation is an arbitrary achievement the dead miss out on but the living prosper from. I sometimes wonder if it is the manner of this tortured artists demise that got peoples attention. In Vincent's case, was the act of self harm and suicide viewed as a form of art in itself that elevated van Gogh through the stratosphere of artistic appreciation?

Did van Gogh scream for attention to his art by slicing off his ear? If so, it didn't work. Maybe the only alternative was the ultimate sacrifice? History has taught us that tragedy sells art. Think of Masaccio who was poisoned at 26, Giorgione who succumbed to the plague at 32 and Watteau who died at 36 clutching a paint brush whilst painting imaginary art in the air as if sword fighting with the devil himself.

Look at the romantic poets Shelley, Keats and Lord Byron who all died young. In all cases, the work becomes immortal when the artist dies. The smaller the body of masterpieces the wider the audience or the higher the price.

But did he have to die to become successful? I think not. Many a philistine has stepped into the Van Gogh Museum in Amsterdam dispirited yet stepped out delighted. His tragedy was not his talent. His gift was the inspiration of his minds eye that placed his genius at the tip of his paint brush.

And what a colourful palette it produced. Any fool can flood a canvas with gorgeous colour. But it takes a genius to make that colour emotive. Vincent van Gogh was a story teller in paint. His bright brush is unique and more memorable than the psychosis casting its shadow over his death.

In his day, Vincent van Gogh could see and feel his brilliance but the critical eye of artistic acclaim would prove elusive for him to witness. His paintings and talent were ahead of his time. Indeed, of the 2000+ works of art van Gogh created he only managed to sell one during his lifetime. The painting was "La Vigne Rouge" that his brother, Theo van Gogh, sold to the painter Anna Boch for 400 Francs in 1890.

These days when a van Gogh comes onto the market they sell for tens of millions. The last van Gogh to hit the market was "Laboureur dans un champ" that sold for $81.3 million in 2017. Before that "Portrait of Dr. Gachet" was sold by Christies New York for $82.5 million in 1990.

Back in Vincent's day, without any sales to support himself, he was lucky to have a patron. His brother Theo appreciated his talent far beyond the critical gaze of the era. Indeed Theo's support kept Vincent in house and board wherever he chose to roam.

All great artists are touched by genius, but this is a personal commodity that rarely comes without a downside. Vincent was a troubled soul whose gift was his artistic vision that was the inspiration of his minds eye.

During his life time van Gogh was not bad but he became mad without a flicker of a fad. He became a serious painter at the relatively late age of 27. By nature he was an artist, it was in his DNA. But van Gogh's gift as an artist was both a blessing and a curse.

The mind of a genius rarely has the cranial capacity to cope with the copious amount of cognitive content that is being churned. Such was the lot of Vincent van Gogh. It was his love of art that consumed him. The passion of his mental imagery expressed on canvas preceded the praise it pried posthumously.

Vincent suffered bouts of depression as his mind teetered from madness to moments of lucidity. To make matters worse his favourite tipple was Absinthe, an alcoholic drink derived from wormwood that was capable of causing hallucinations and erratic behaviour.

Vincent struggled to settle in many places he lived. He tried and failed in many jobs. He even dabbled in religion by becoming a preacher and a missionary. His parents grew frustrated at his lack of career focus and his mood swings. His father, Theodorus van Gogh, at one point tried to have him sectioned in a lunatic asylum.

Life seemed complicated to van Gogh. Art was his only constant and the one thread of sanity for Vincent to lean on. He felt at home at the easel. Art was the sound of the siren that captivated his soul. It was inevitable he would follow the path of the brush wherever it would take him.

For Vincent, his journey led him to Arles in the South of France. This would prove to be his most productive artistic period where his creative spirit flourished under bright blue skies and soft beckoning hues of green and yellow.

Vincent left behind the grim fog of London mornings where he wandered alongside the misty Thames to his job at the art dealers Goupil's on Southampton Street. Back in his Netherlands home the north wind chilling his brow was a distant memory as the warm Sirocco breeze of Arles brought out the best in his brush.

Arles was welcoming, he lived in the yellow house which he famously painted and indulged in cafe life which van Gogh captured in colourful oils in the Cafe Terrace at Night. The paint was flowing in tandem with the visual stimulation he was consuming.

The beauty of the south of France sparked something in van Gogh. He was no longer looking to brighten the humdrum. It was an artistic enlightenment that both delighted and devoured him.

This prolific period was the pinnacle of his primed palette. The van Gogh pantheon of paintings that permeated through his northern European existence ripened under the Arles sun. He painted vineyards, orchards, sunflowers, rivers and street life. In two years van Gogh completed in excess of 300 paintings, drawings and watercolours.

Shortly before his death van Gogh teamed up with French artist Paul Gauguin. They spent a very productive couple of months sharing a studio and creating some wonderful art on the cote d'azur. Paul Gauguin spoke of the brilliance in his contemporary: "Something shone out of his canvases and out of his talk, too…. He possessed the greatest tenderness, or rather the altruism of the Gospel".

Nearing the end of their working relationship van Gogh went to attack Gauguin with a razor but stopped and ran back to their accommodation where he chopped his ear off instead. It was a moment of artistic frustration. He then washed his severed ear, placed it in an envelope and gave it to one of the girls in a local brothel he frequented.

Subsequently van Gogh spent one year in an asylum before being released. It was to little avail. Within months the torment took control and Vincent took his own life with a fatal gunshot to the stomach. His death was not instantaneous. It took 30 hours before his tortured mind was put to rest and the magic from the fingertips that was his brush was extinguished.

Word soon spread of the tormented artists demise. Just as he stood in admiration of Monet, Rubens, Renoir and Rembrandt; artisans began to appreciate the work and life of van Gogh. His art has gone on to inspire every generation of creatives born in the 20th century and beyond including Pollack and Pablo Picasso.

Often misunderstood, the Bohemian manic moniker he acquired belied the equity of his mind as he expressed his love onto canvas. Indeed, as Vincent van Gogh once said: "What is done in love, is well done". Well, with his artistic legacy as his witness, we can now, all feel the love of Vincent van Gogh.

Sleep well Vincent. Your starry, starry night will forever shine a light on your posthumous genius.

From great talent often come great quips and he was very good for a one liner, so this is my compilation of 25 of the best Vincent van Gogh quotes.

The artist Paul Gauguin described their relationship: "Between two such beings as he and I, the one a perfect volcano, the other boiling too, inwardly, a sort of struggle was preparing"

Dutch painter Bram van Velde gave this observation: "In this world of petty calculations, he was too intense. He frightened people. They cast him out"

Bram van Velde also paid a fine tribute by describing him thus: "A man who is on fire, a torch. His sincerity is absolute"

Pablo Picasso found inspiration in the dramatic: "It is not what the artist does that counts. But what he is.... What interests us is the anxiety of Cézanne, the teaching of Cézanne, the anguish of Van Gogh, in short the inner drama of the man. The rest is false"

The critic Eric Newton was praiseful in his words: "When he painted with reckless courage from a full heart … the results are astonishing. What is more, they will always be astonishing. That kind of genius cannot go out of fashion" 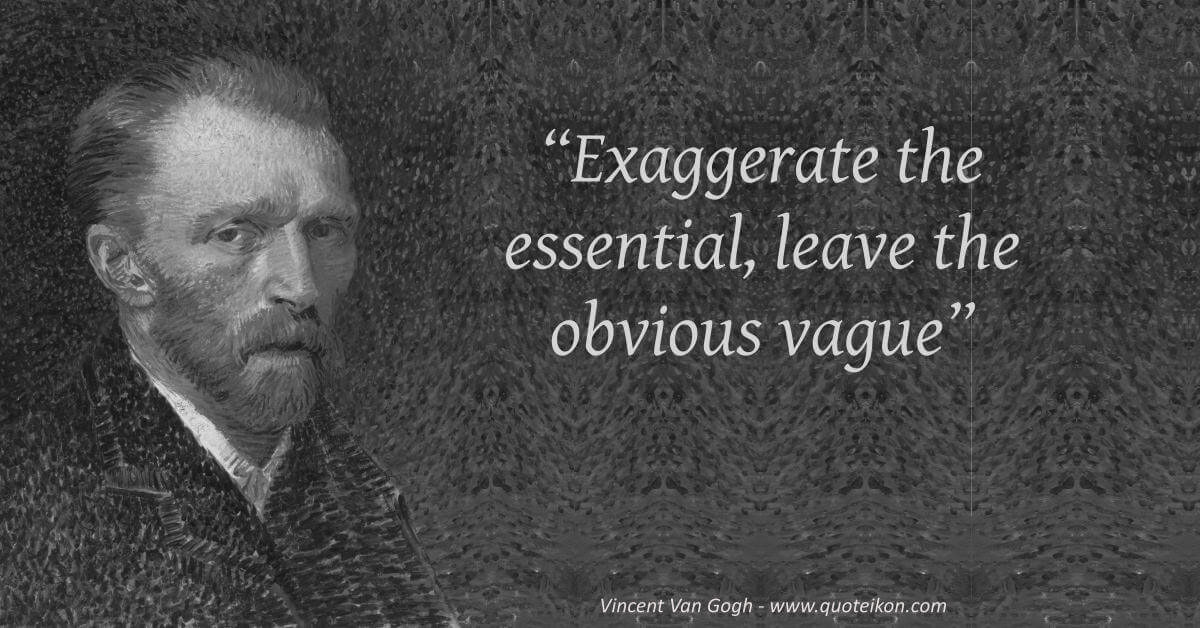