Mao Zedong rose from his agrarian background in rural Hunan province to become one of the founding members of the Chinese communist party (CPC) and the founder of the People's Republic of China. Being a revolutionary in any country is a struggle but when your target is the planets most populous country that task becomes Herculean.

Mao's struggle began in earnest in 1923 when the CPC allied with Kuomintang nationalist party (KMT) in fighting Chinese warlords whose grip on their own localised power prevented the creation of a one government state. In 1927 the KMT double crossed the CPC attacking them in their own quest for power and Mao had to lead a Communist retreat for survival which was the making of his legend as it became known as the "The Long March" that lasted one year from October 1934 until October 1935.

With the KMT in hot pursuit the Communists covered in excess of 9,000 kilometers in an evasive manoeuvre across some of the most challenging terrain in eastern China. It was a bitter struggle for survival that tested the resolve of Mao's leadership skills to the hilt.

Years later the long march would be celebrated as a glorious event with Mao overcoming all obstacles of adversity. The depictions of heroic action became part of Communist folklore with Mao Zedong being the compass that led by example with his acceptance of hardships without complaint whilst stepping up to meet the enormous challenge of feeding a hungry army in seemingly perpetual motion.

Despite their differences, the Japanese invasion of China caused an uneasy alliance to form again between the KMT and the CPC. But once the Japanese threat was eliminated after WW2 the two Chinese factions were back at loggerheads in a fully blown Chinese civil war.

The CPC were victorious in 1949 and Mao Zedong became the Chairman of the Communist Party and was to rule over China until his death in 1976.

The fate of the KMT was a polar opposite to the long march endured years earlier by the Communists. The KMT had no land to retreat across so they ventured across the sea to the island of Taiwan which they had controlled since the end of WW2.

The KMT held the reins of power over Taiwan for a further 40 years. They continually cast an envious eye across the Taiwan Straits to their ancestral mainland. Their hope was for the Americans to assist in usurping Communist rule, but the U.S. would not commit militarily.

Mao Zedong was victorious. So the Communist party tightened their grip on China. His legacy was to lay the foundations for China to again become a world super power but it was not without great struggle and hardship along the way.

In 1957 he saw the progression of the country as being too slow and decided to implement a policy that although was well intentioned, it was far from well thought out and ultimately led to the death of tens of millions of people.

The "Great Leap Forward", as it was called, was a multi faceted program that intended to industrialise the country and revolutionise agriculture. The humble sparrow was deemed a threat to crops as it ate seeds, grain and fruit, so Chairman Mao announced a nationwide cull of all sparrows with scant regard for what the unintended consequences might be.

Sparrows have a fondness for eating insects and are the nemesis of the locust, all of a sudden China was not taking a great leap forward but rather taking a leap into a plague of locusts and other disagreeable bugs that along with a drought decimated the Chinese crop output of 1959 and 1960. The cull was eventually abandoned but sparrows were nearly extinct in China and it took years for the sparrow population to recover.

The Cultural Revolution which started in 1967 was another unfortunate episode of Mao's reign as it targeted many educated people who had a lot to offer the country. It was another regrettable period of Mao's rule where millions of people lost their lives.

The Mao Zedong legacy tends to focus on the negatives of his chairmanship but there were plenty of positive aspects to his time in power that should be considered. The late 1960's and early 1970's saw some great technological advances for China as they became a nuclear power and launched their first satellite into space.

Life expectancy rose significantly during this period and China finally mastered the art of feeding their burgeoning population as living standards generally rose. Another often overlooked aspect of the Mao reign was the wealth gap was far less than it is today in a China which made everyone feel more equal.

Mao Zedong was a great poet and orator who used strong rhetoric to inspire the people who were brought up on a culture of profound wisdom generated through a 5,000 year old system of values that lives on and grows in the psyche of every generation of what the ancients referred to as the "Middle Kingdom".

His understanding of Chinese history and the importance of words of wisdom meant he was always good for a one liner, so this is my compilation of 23 of the best Mao Zedong quotes

King Carl XVI Gustaf of Sweden was inspired to describe him thus: "Mao Zedong! Amazing man! Imagine him and his followers wandering through China day and night, fighting for their goal. What an effort. He has also written beautiful prose and excellent poems"

The 14th Dalai Lama Tenzin Gyatso looked up to him: "He appears to me as a father and he himself considered me as a son"

Nikita Khrushchev showed political admiration: "Mao has played politics with Asian cunning and has always been a master at concealing his true intention. I was always on my guard with him"

The Ethiopian leader Haile Selassie was impressed as he said: "We spoke at length and We really liked Mao Zedong. A lot. He gave Us a very good impression. He is a good and very serious leader, and his people have done well to embrace him"

Joseph Stalin strategised post WW2 peace with comrade Mao: "In China a war for peace, as it were, is taking place. The question of peace greatly preoccupies the Soviet Union as well, though we have already had peace for the past four years. With regards to China, there is no immediate threat at the present time: Japan has yet to stand up on its feet and is thus not ready for war; America, though it screams war, is actually afraid of war more than anything; Europe is afraid of war; in essence, there is no one to fight with China, not unless Kim Il Sung decides to invade China? Peace will depend on our efforts. If we continue to be friendly, peace can last not only 5-10 years, but 20-25 years and perhaps even longer"

The Chinese political leader Lin Biao amplified his Chairman's words: "One word from Chairman Mao is worth ten thousand from others. His every statement is truth" 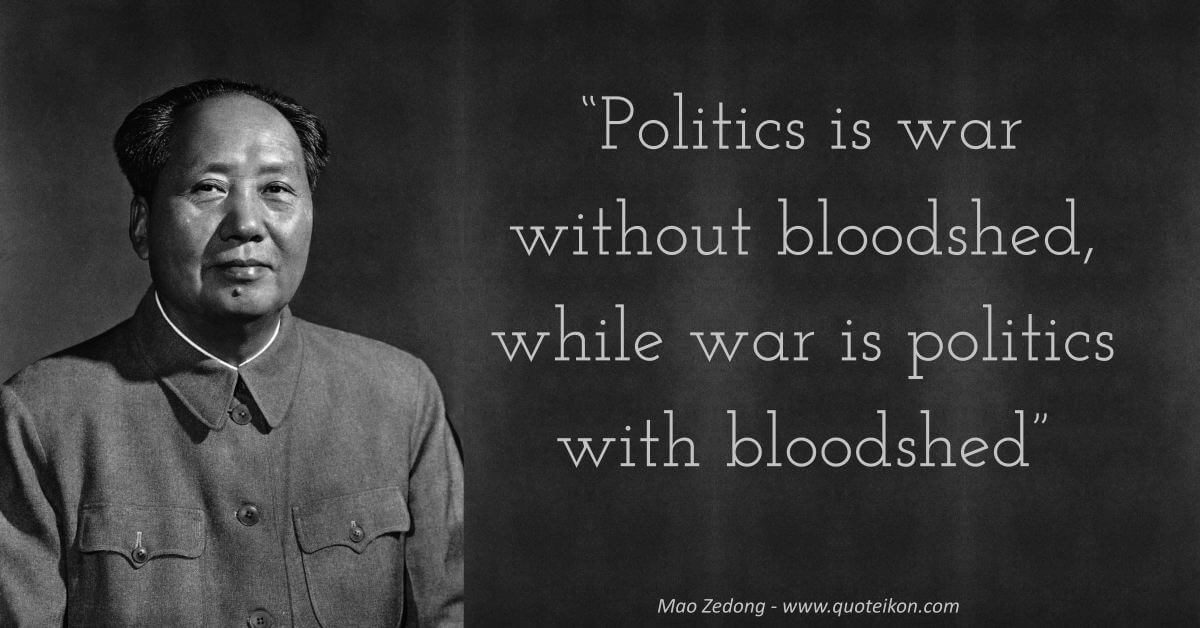