Richard Nixon was a highly intelligent politician who defeated all the odds as a come back king to ascend to the highest office by being elected as the 37th President of the United States. After serving in the U.S. navy in WWII he totally immersed himself in a highly successful political career in which he garnered a reputation for "getting the job done".

From 1953 to 1961 he was vice president to Dwight D. Eisenhower and he established himself as the best republican candidate to take on the then democratic hopeful John F. Kennedy in the 1961 presidential campaign.

Nixon narrowly lost to JFK and then in the following year he was defeated in his next battle to become the Republican Governor of California in 1962 making his political future looking rather bleak, at the time he was angry with his treatment in the press and Richard Nixon was quoted as saying: "You don't have Nixon to kick around any more, because, gentlemen, this is my last press conference".

But yet in a mere six years time he was to walk through the doors of the White House as the commander in chief as his 1968 election as president was called one of the greatest political come backs of all time. His tenacity knew no bounds, he was a courageous politician who could stand his corner and fight, one of Nixon's most famous quotations was oft repeated as a lesson to all men: "A man is not finished when he's defeated. He's finished when he quits".

Nixon's accomplishments were many as he bore witness to American astronauts setting foot on the moon whilst he carried out his pre-election pledge to end conscription to the armed forces and introduced a highly popular conservative philosophy to the Supreme Court. He eventually brought an end to the conflict in Vietnam and was responsible for reducing world tensions with the communist block of the Soviet Union and China.

His popularity was so high that he was reelected as president in 1972 with one of the widest margins ever. It seemed nothing could go wrong for this seemingly untouchable president with morally intact political credentials. Yet just two years into his second term his political power base came crashing down in the Watergate scandal where he resigned his presidency rather than face congressional impeachment and in doing so he became the first and only U.S. president to resign from office.

Nixon's Tricky Dicky moniker from years gone by came back only this time the intensity of the meaning carried a lot more venom than the jovial half truth used to besmirch his character in the 1950's and 1961 presidential campaign. Post Watergate the press never forgave Nixon and plagued him to the end of his life, however subsequent presidents were more accommodating with Reagan, Clinton and Bush all seeking his advice on numerous occasions.

It will be interesting to see how history eventually treats his years in the Oval Office as the generations whose personal interests in the dealings inside the corridors of power of that era all expire their allotted time on this earth. One thing is for sure now though is that he was great for a one liner so here is my compilation of 20 of the best Richard Nixon quotes

David Frost asked him straight: "Are you really saying that in certain situations the President can decide whether it's in the best interest of the nation and then do something illegal"

The Shah of Iran Mohammad Reza Pahlavi was quoted to describe him thus: "Nixon is a strong leader with a good grasp of the world's problems. He knows that the only way to argue with the communists is from a position of strength"

Henry Kissinger defended his decision on Cambodia: "Here, according to the mythology of the liberals, was a peaceful little country that Nixon attacked. The fact that there were four North Vietnamese divisions within 30 miles of Saigon coming across the border killing Americans—killing 500 a week starting within two weeks of Nixon’s inauguration—was ignored in the debate on Cambodia by protesters emphasizing the technical neutrality of Cambodia and ignoring that its ruler had invited our response"

The 34th U.S. president Dwight D. Eisenhower spoke highly of him: "Richard Nixon is one man, so intimately and thoroughly known to me, that without any hesitation I can personally vouch for his ability, his sense of duty, his sharpness of mind, and his wealth of wisdom"

Republican politician Barry Goldwater was not so kind: "He was the most dishonest individual I ever met in my life. President Nixon lied to his wife, his family, his friends, longtime colleagues in the US Congress, lifetime members of his own political party, the American people and the world"

The philosopher Eric Hoffer was more balanced in his assessment: "The Nixon tragedy: A man of unsurpassed courage and outstanding intelligence but without vision. An opportunist who missed his greatest opportunity"

Maybe John F. Kennedy had the measure of him before their 1961 duel for the presidency: "Do you realize the responsibility I carry? I'm the only person standing between Richard Nixon and the White House" 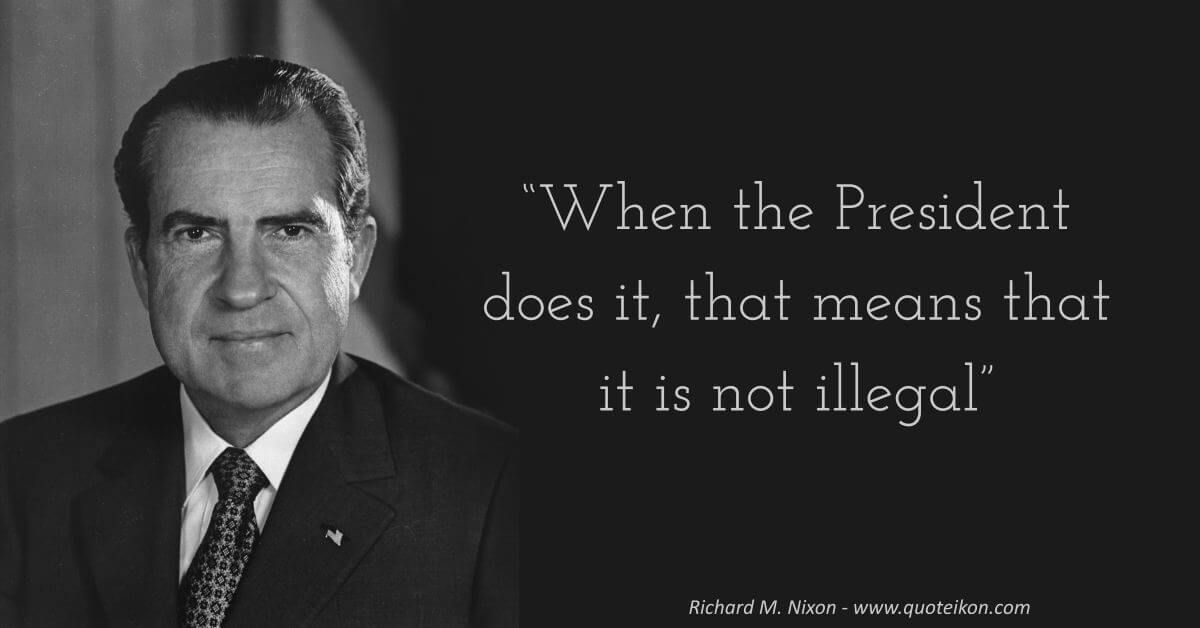