Leonid Brezhnev was the man with the iron eyebrows who led the Soviet Union for 18 years through what was arguably their greatest era and ultimately the start of their decline. A son of the Russian revolution he looked on with curious admiration as a boy at the events of 1917 that inspired him to join the communist youth party in 1923 and just before a time of great upheaval in the Soviet Union he joined the main party in 1929.

It was the era of the dictator Joseph Stalin and his political purges of the mid to late 1930's that led to unexpected opportunities for advancement in the communist party and he was at the right age at the right time without the reputation that would put him him the category that Stalin would deem a threat, so he advanced quicker than he could ever have imagined.

During WW2 he was drafted to a political army position in the Caucasus under Nikita Khrushchev who he had previously met at communist meetings during the 1930's. He quickly impressed and got promoted to the head of the Political Department of the 18th Army. This was the beginning of a long professional relationship with Khrushchev who had designs on the Soviet leadership as Stalin was growing older and needed a strong and loyal support group of communists behind him.

In an ironic twist of political manoeuvering Brezhnev conspired and was responsible for the downfall of his mentor in the early 1960's and just as the iron curtain looked like softening under the reforms of Khrushchev it took a backward step as comrade Leonid took hold of the levers of Soviet power in 1964.

On the home front his first ten years were the pinnacle of domestic bliss in the whole of the Soviet era but economic distress was on the horizon in the mid 1970's as the country was at the forefront of the arms race at the expense of the peoples stomachs. As the decade progressed comrade Brezhnev started to become a caricature picture of political parody as his policies lost pace with the progression of the world while his speeches maintained the equilibrium of the communist dream.

Then there were the cars and the medals, western leaders used to gift him expensive cars which he readily accepted as his collection of marque automobiles would draw jealous glances from the most bourgeois of capitalists whilst he wore his 100 plus medals that were mostly "awarded" to him by his own comrade cronies.

His first 10 years are still looked upon as the golden era of Soviet rule so it could be argued that he was successful but guilty of staying too long. Either way he was good for a one liner so here is my compilation of 20 of the best Leonid Brezhnev quotes

The eminent Russian diplomat Dmitry Peskov recognised his comrades contribution to the country by saying: "Brezhnev wasn’t a minus for the history of our country, he was a huge plus, He laid a foundation for the country’s economics and agriculture"

The Shah of Iran Mohammad Reza Pahlavi was quoted to say: "All ideological differences set apart, I cannot help having a sincere admiration for Mr Brezhnev"

Ronald Reagan got caught in a moment of deep reflection as he called him: "One of the world's most important figures for nearly two decades"

The Prime Minister of India Indira Gandhi in 1982 spoke quite succinctly of him when she recalled: "He stood by us in our moment of need" 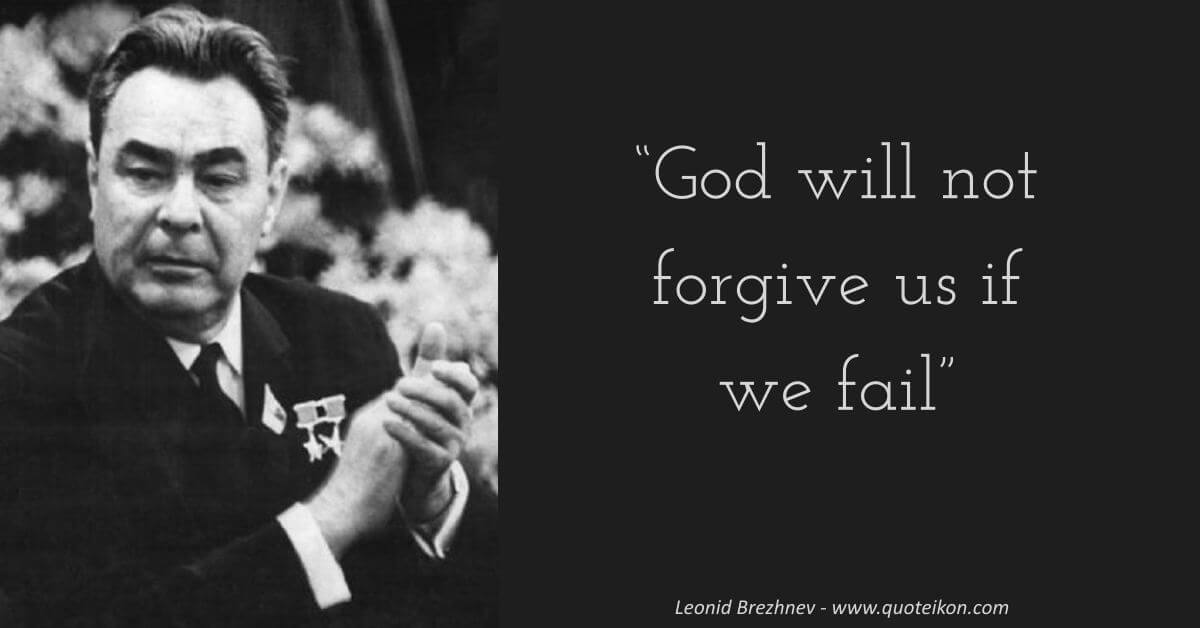