Mohammad Reza Pahlavi will forever be remembered as the last Shah of Iran who was unceremoniously usurped in the 1979 revolution that brought the curtain down on a monarchy that had lasted more than 2,500 years.

The Iranian Revolution of 1979 was a bitter pill for Reza Pahlavi as he genuinely believed he had done everything in his powers to improve conditions for all Iranians during his 25 years in power since the 1953 coup d'état that saw him sweep to power with the backing of the Americans who were more concerned with curtailing Soviet influence.

Once Reza Pahlavi became The Shah in the 1950's he listened to his enemies and political opposition such as the National Front and did much work to both appease and coerce them to work with him. He quickly found out politics was a treacherous dark room occupied by blind voices searching for a grasp of the greasy pole of power so he decided to do things his way as his contempt for politicians grew in tandem with the noise from the hollow vessels they largely represented.

The Shah began to craft his image using Cyrus The Great as the role model in a comparison to promote his own struggle for empire building in the footsteps of the great king from a span of two millennia beforehand. This strategy did much to build national pride and restore the dignity of the people as Iran had been for many decades rudderless despite its rich and glorious history.

The Shah was determined to build Iran so in 1963 he launched his "White Revolution" that was a program of land reforms, infrastructure developments and educational reform aimed improving the chronic levels of illiteracy in the country. This was a ground breaking moment for Iran for he also upset the religious clerics as he granted women suffrage much to the angst of Ayatollah Khomeini who was outraged that women should be given such rights as he led a series of demonstrations against the Shah. The religious anger had caused riots where over 200 people were killed and it led to Khomeini being exiled to Iraq.

The religious discontent had been silenced but it always remained in the background simmering away just waiting for an opportunity. As Iran's oil dollars rolled in there were improvements in the country but the lust for power is never eradicated and subversives were always looking for opportunities to criticise the Shah's regime and the money lavished by the king celebrating the continued rule for 2,500 years of the monarchy in 1971 was one such case that subsequently kept on resurfacing as a persistent thorn in the Shah's side.

As the 1970's progressed Mohammad Reza Pahlavi became disconnected from his people with many of the middle classes who had gained an education because of the reforms the Shah had introduced turning their backs on him as they become ever more demanding for further changes. Then in 1976, the religious Ayatollah's became actively indignant towards the Shah after he replaced the Islamic calendar with a Persian calendar which led the regime to begin to lose patience and crack down on dissidents of every flavour as the politically charged temperature rose towards the end of the decade.

As the decade wore on the pressure on the Shah's administration grew, there was the unlikely alliance of Communism and Religion as the Soviets backed the Islamists to topple the monarchy in what the Shah later described as the "unholy red and black alliance". In late 1978 thousands of demonstrators took to the streets and in the subsequent unrest there were 100's of casualties who the opposition consistently portrayed as martyrs. The discontent fed into the hands of the supporters of Ayatollah Khomeini who was being labelled as the saviour of Iran as he encouraged the unrest with fire and brimstone rhetoric from his exiled base in Paris.

Reza Pahlavi, who had been suffering from cancer since 1974 had become distanced from his people and politically paranoid as he suspected everyone from the CIA to the KGB, MI5 and even the BBC for organising the Iranian people to revolt against his monarchy, through his illness he had become disconnected from the people and indecisive with important affairs of state. It was a combination of events that was to prove catastrophic for one of the oldest existing monarchies that stretched back more than two millennia to when Persia was one of the most powerful empires on earth.

The Iranian revolution was the final curtain for Mohammad Reza Pahlavi, he left Tehran for the last time on 16th January 1979, he roamed various countries searching for solace which he found and solutions which he could not accept. He eventually settled in Egypt where he stayed until his death in 1980. In the immediate aftermath of the Iranian revolution the press was less than kind, but, as we approach nearly the half century after his passing historians are beginning to look back more favourably on his reign. Indeed there is even talk of bringing back the house of Pahlavi through his descendants as the progress of the Mullahs is beginning to show itself as rather less than progressive when compared to that of the Shah's reign

Despite such a long monarchal history in Iran he always seems to be remembered as simply "The Shah" because he was the last incumbent on a throne that lasted more than 2,500 years, all that history considered he was also great for a one liner so this is my compilation of 20 of the best quotes by the Shah Mohammad Reza Pahlavi.

The Iranian academic Jahangir Amuzegar shared this observation: "By no stretch of the imagination - as people who knew him closely, personally, or professionally would testify - was Mohammad Reza Shah a dictator in either the historical or contemporary sense of the word. He was not ruthless, mean-spirited, bloody, or tyrannical. A twentieth century man in the street would identify a dictator with Stalin, Hitler, Mao, Idi Amin, Bokassa, Duvalier, Doe, Ceausescu. Mohammad Reza Shah resembled none of them. He may have been an autocrat in the genre of Tito and Franco, but he was not a dictator"

U.S. President Jimmy Carter was impressed to say: "Iran, because of the great leadership of the Shah, is an island of stability in one of the most troubled areas of the world"

Barack Obama shared a different U.S. Presidential view: "Was the collaboration of some slaves any different than the silence of some Iranians who stood by and did nothing as Savak thugs murdered and tortured opponents of the Shah? How could we judge other men until we had stood in their shoes?"

The author Amir Taheri gave this assessment: "The Shah regarded politics as the province of demagoguery, an art in which only charlatans could excel. He had no time for what he saw as the tedious process of achieving consensus through debate and discussion and tried to justify his solitary exercise of power by insisting it was what Iran needed to catch up with lost time. He believed he was more patriotic than anyone else and needed no advice on how best to promote and protect the highest interests of the nation"

The French author Gérard de Villiers was impressed to say: "It seems that amassing a fortune is not the Shah's chief aim in life. What appears to motivate him most, the thing to which he devotes all his energies, has much vaster implications: He wants to become a part of history, to engrave his name for all time not only on the history of his country of his country but on that of the entire world. With his mysticism, he might even hope to fill the spiritual void in the Western countries which, in his view, are floundering in materialism"

His twin sister Princess Ashraf Pahlavi said in 1983: "After the death of my brother, if we had had the $65 billion some people said we had, we would have retaken Iran just like that" 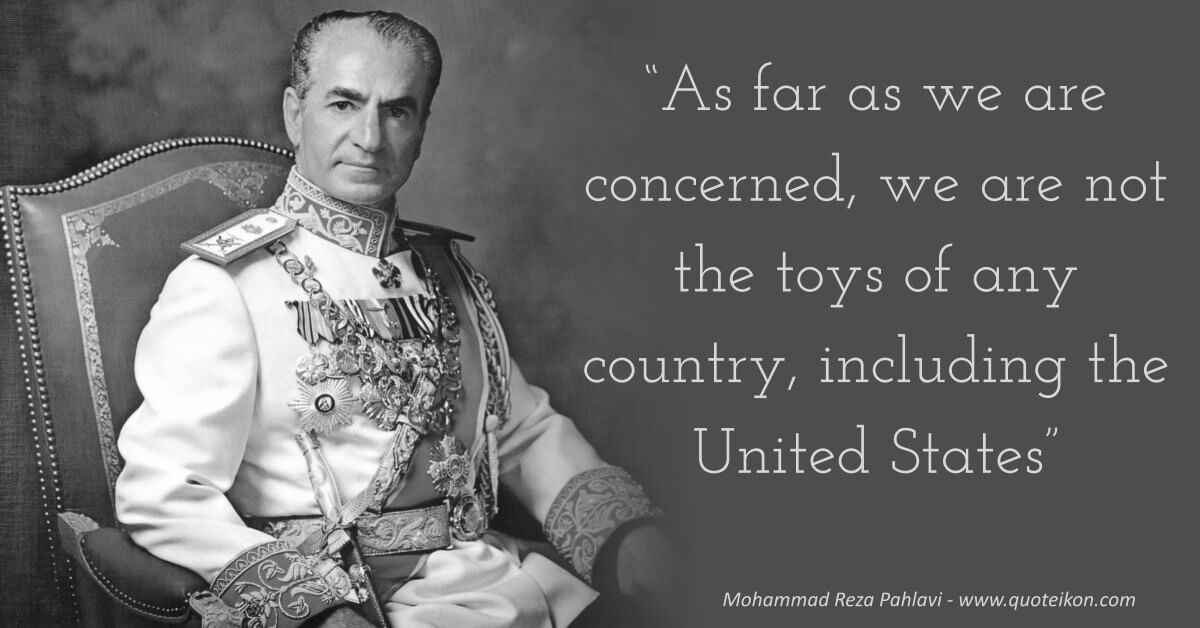