In 1948 Hollywood discovered a talent so enchanting he stole the show with his supporting role, the actor was Montgomery Clift who impressed the critics and wooed the ladies in a subtlely intensive power struggle against the misguided masculinity and bull headed self destruction of his mentor. The movie was "Red River" and the actor in the leading role was the Duke himself, John Wayne, the master of western masculinity.

Montgomery Clift had been working in Broadway plays for ten years when the director Howard Hawks spotted him and offered him a role in Red River, although Clift was reticent about the transition from stage to screen he quickly agreed as the lure of the Hollywood dollar was too good to ignore, even for the principled man that he was.

1948 was the break through year for Montgomery Clift, although "Red River" was filmed in 1946 it was not released until August 1948, the first Clift movie to hit the screen was "The Search" which was released in March 1948 and it earned him his first nomination for an Academy Award for best actor.

Unusually for that period Clift was not under a studio contract but that did not stop the movie offers coming in as he quickly signed up for the role of Morris Townsend in the 1949 film "The Heiress" which also starred Olivia de Havilland. "The Heiress" was a commercial success that received widespread critical acclaim and was rewarded with four Academy Awards although Montgomery never really got on with the cast and crew during filming.

In 1951 he starred alongside Elizabeth Taylor in "A Place In The Sun" in what was his most challenging role to date. Clift immersed himself in his character using masterly improvisations as he projected the poignancy of the condemned man with great aplomb. It was not just a great performance as the press labelled Clift and Taylor as the most beautiful couple in Hollywood and Clift received his second Academy Award nomination for best actor.

Considering he gained a reputation for being very choosy with scripts 1953 was a prolific year for Montgomery Clift as he starred in the Alfred Hitchcock thriller "I Confess", Vittorio De Sica's "Terminal Station" and received his third Oscar nomination for best actor in Fred Zinnemann's "From Here to Eternity". Whilst the critics fanned his ego with lavish praise for his role of Private Prewitt in "From Here To Eternity" Clift also turned down a starring role in "East Of Eden" which was the movie that launched the career of James Dean.

In 1956 he was reunited with Elizabeth Taylor for the filming of "Raintree County" until fate intervened as Clift was involved in a road traffic accident that would prove devastating to the facially expressive actor. He suffered multiple head injuries which required major reconstructive work including plastic surgery which delayed filming by two months, reduced the movement on the left side of his face and left him in constant pain that he resolved with the use of alcohol and pills. "Raintree County" had a ghoulishly successful run at the cinema as movie goers flocked to see the difference in his face from before and after the accident.

With his reliance on emotional and physical pain relief the remainder of his career went into a slow and prolonged decline. There were some highlights with his 1961 performance alongside Marilyn Monroe and Clark Gable in "The Misfits" and in 1962 playing the Austrian psychoanalyst Sigmund Freud in John Huston's "Freud: The Secret Passion" but the light that previously shone so brightly was becoming a gentle flicker in the wind as his cycle of substance abuse was taking its toll on his now prematurely aging body. The face that was once so handsome was still recognisable but the profession he devoted his life to was growing weary as he had garnered a reputation for unreliability due to various health issues.

After a barren spell of four years without a movie he was cast as Professor James Bower in the 1966 movie "The Defector" which proved to be his swansong as he died in July of the same year. It was not the best of movie's to go out on but he could no longer be fussy about which scripts to accept, it was his last hurrah and a critic at The Los Angeles Times summed it up by described his performance as "first rate" but said the film was "second rate".

If Clift had not survived the car crash his legacy would have shot him into the stratosphere of revered iconic actors, he would have been immortalised in the same way as James Dean but with a greater body of work than Dean it would have inflated his myth to be one of the greatest cultural icons of the twentieth century. As a master of his profession he was one of the first to showcase to the world the benefits of method acting as he focussed on the detail of every character he portrayed. Always intense, he displayed an onscreen sensitivity that added depth to every scene as he improvised on the script to the delight of most directors he worked with.

He always acted, never recited and he was good for a one liner off screen also so this is my compilation of 18 of the best Montgomery Clift quotes

Elizabeth Taylor was quoted as saying: "The most gorgeous thing in the world and easily one of the best actors"

Elizabeth Taylor later said: "Monty could've been the biggest star in the world if he did more movies"

Johnny Depp recognised his talent: "The real movie stars were Humphrey Bogart, Lauren Bacall, Spencer Tracy, Montgomery Clift. How could I put myself in the same category as Clark Gable?"

Marilyn Monroe made this comparison as she described him as: "the only person I know who is in worse shape than I am"

The actor Jack Larson described his personality: "He loved to have fun. He had a great sense of humour. As a person he was nearer to Jerry Lewis onscreen than he was to Montgomery Clift"

The director Stanley Kramer talked about his improvisation during the making of "Judgment at Nuremberg" (1961): "He wasn't always close to the script, but whatever he said fitted in perfectly, and he came through with as good a performance as I had hoped"

The actress Donna Reed described him thus: "I’ve never known an actor who went so far as Monty did in getting every detail, every reaction, every emotion of the character he was depicting" 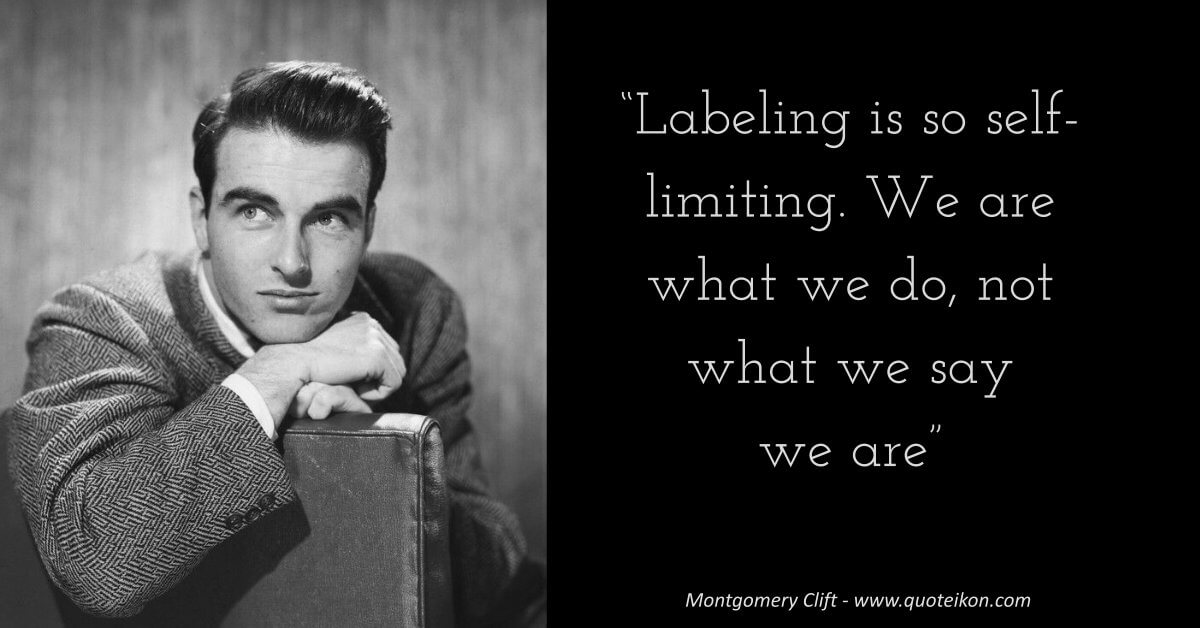