John Wayne galloping off into the sunset after riding roughshod over some bad-ass Indians or gun toting outlaws was one of the many iconic memories that is forever embedded into the minds the millions that appreciated the genre of the western's that dominated the silver screen for more than half a century.

Before he blazed his trail through the wild west he showed promise as a footballer at USC until a broken collar bone cut short the prospect of a sporting career. His USC football coach Howard Jones got him a job as an extra on a John Ford movie and he decided there and then that the bright lights of Hollywood was the trajectory he wanted his career to follow.

The young Morrison was awe struck when on location he met a legend of the old west Wyatt Earp who reminisced him with tales of gunfights and his code of honour as a lawman. The impression Wyatt made on him was huge which he readily admitted as John Wayne was quoted as saying: "Earp was the man who had actually done the things in his life that I was trying to do in a movie. I imitated his walk; I imitated his talk".

On screen he certainly could walk the walk and talk the talk, even though his dialogue was mostly limited you could sense the immense presence of the man because when he did speak it was with real meaning and always backed up with action. He was as hard as nails but he had a heart of gold as even the actress Elizabeth Taylor was quoted as saying about The Duke: "He is as tough as an old nut and as soft as a yellow ribbon".

His image was a big thing that directors constantly tapped into as did the Republican party of the U.S. as his political views were very conservative.

The politics of the Cold War gave him some chilling news when Nikita Khrushchev personally told The Duke that he inherited an order from his predecessor Joseph Stalin that John Wayne should be assassinated because of his high profile status and his staunch denunciation of the Soviet regime, Krushchev went on to reassure Wayne that he had rescinded the order.

John was a man's man who wore his heart on his sleeve and he was never shy of speaking his mind which made him good for a quick quip, so this is my compilation of 15 of the best John Wayne quotes

Elizabeth Taylor spoke about his lasting influence: "His image had as much impact in the world as many of our presidents have had, but Duke was a great actor, a great humanitarian, but always himself. To be a friend was a lifetime thing"

Author Scott Eyman summed up his movie script selection process by saying: "He intended to play only men who mirrored his own beliefs, his own values"

Bob Hope said this in respect of the big man: "There is nobody who can fill John Wayne's boots" 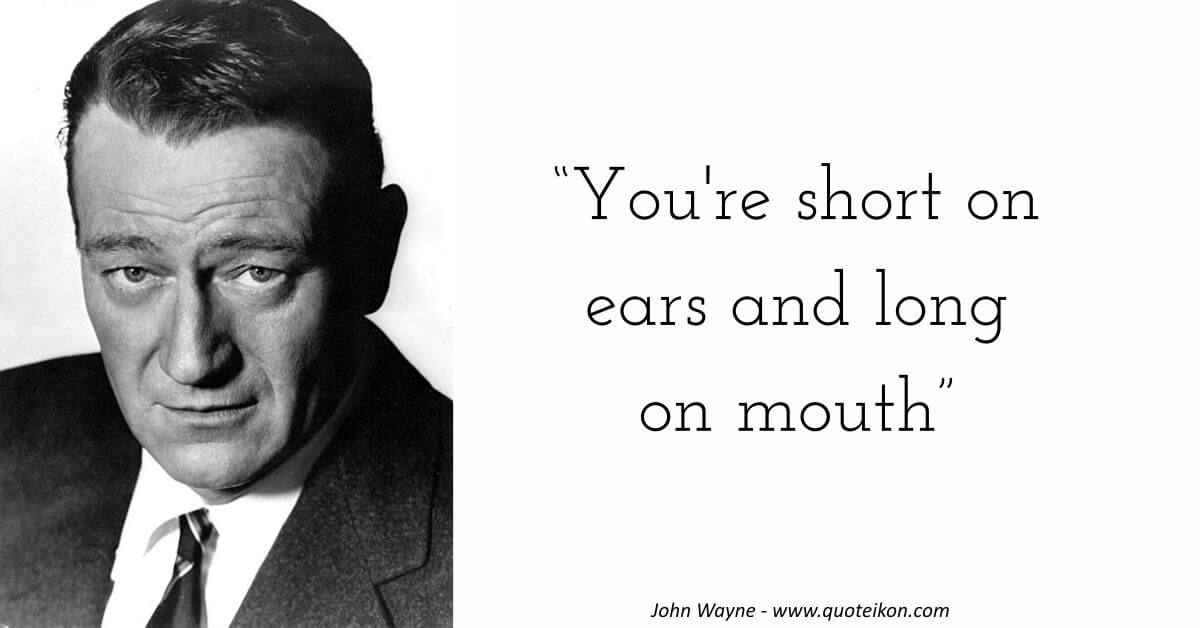