Humphrey Bogart was the American actor whose distinguished face delivered lines with nonchalant irony backed up by those worldly wise eyes that endeared him to audiences and made him an iconic star without the Hollywood handsome label.

His success was hard-fought for as he learned his trade in the theatre until he got his first big break in the 1936 movie "The Petrified Forest" which was a box office success and earned Bogart a long term contract with Warner Brothers whereby they typecast him as a bad guy playing mostly supporting roles in gangster movies. Indeed, Humphrey Bogart was quoted as saying: "In the first 34 pictures for Warner's, I was shot in 12, electrocuted or hanged in 8, and was a jailbird in 9". In an era of dashing leading men such as Errol Flynn or Clark Gable, his studio lacked the vision to see the talent that lay beneath his leathery features, Bogie needed a change of luck to escape his supporting typecast pit of despair.

He would not have to wait too long for his luck to change as Hollywoods leading men of the early 1940's became more choosy about roles as they searched for that killer script as a vehicle to an Oscar. The director of "High Sierra" (1941) wanted George Raft but he turned the role down much to Bogie's advantage because when it was offered to him Bogie gladly accepted. The film was successful in more ways than one, as Bogart not just proved his leading actor prowess he also started a close friendship with screenwriter John Huston who also appreciated the actor's on-screen performance.

Later that same year George Raft made another monumental error of judgement when he turned down the role of Sam Spade in "The Maltese Falcon". This was to be John Huston's directorial debut and he guided the studio to give the role to Humphrey Bogart who seized the opportunity that would further demonstrate his acting credentials as a leading man.

His movie star acceptance was confirmed with the release in 1942 of "Casablanca" which won the best movie Academy Award and although Bogart achieved his first Oscar nomination for best actor he lost out that year to Paul Lukas for his performance in "Watch on the Rhine". "Casablanca" exceeded all expectations as it's characters, lines and the movie itself have graduated over time to become known as one of the most iconic pieces of cinematic history ever released.

One of the great real life Hollywood romances of the 20th century was Humphrey Bogart and Lauren Bacall who met on the set of "To Have and Have Not" (1944) when Bogies tempestuous marriage to Mayo Methot was on the rocks. It became the most talked about on and off screen romance of the era and the age difference meant nothing to Bacall as she enthused: "that 25-year difference was the most fantastic thing for me to have in my life"

In 1946 Bogie and Bacall again graced the screen together in Raymond Chandlers "The Big Sleep" where the director Howard Hawks spiced up the script to increase the on screen chemistry between the two and, with his strong on screen presence, another on-screen legend was born with Bogart being the most memorable actor to play the detective Philip Marlowe.

1948 was a good year for Bogart with the release of "The Treasure of the Sierra Madre" and "Key Largo" which were both under the directorship of John Huston with the former being critically acclaimed but not so successful and the latter being the last movie Bogie and Bacall starred together.

The 1950's saw Humphrey Bogart mature as an actor and he was rewarded with the coveted best actor Academy Award for his role as Charlie Allnutt in the 1951 movie "The African Queen". For authenticity, the film was shot on location in Africa which proved problematic for a number of reasons including all the cast and crew contracting dysentery with the notable exceptions of Bogart and director John Huston who steered clear of the water in favour of their preferred liquid refreshment whisky. After filming was complete Bogie wryly quipped: "All I ate was baked beans, canned asparagus and Scotch whisky. Whenever a fly bit Huston or me, it dropped dead".

At the tail end of his career his health was declining due to years of alcohol and cigarette abuse but Humphrey Bogart still managed to put in some critically acclaimed performances including his role as Captain Queeg in the 1954 movie "The Caine Mutiny" which rewarded him with his third and last Academy Award nomination for best leading actor.

After bagging his hat-trick of Oscars, Bogie became the last male actor born in the nineteenth century to take home the pinnacle prize of Hollywood's acting elite.

Bogarts on-screen presence was one of the major keys to his success, he could tap into his persona to deliver a cynical line that summed up the darkest of situations without blinking an eye as he maintained his tense gaze that accentuated the scene to grip the audience. Off-screen his real life wise cracks were just as famous as his on-screen quips, so this is my compilation of 22 of the best Humphrey Bogart quotes.

Bing Crosby rated him highly: "Bogie was a fine person and a superb actor"

David Niven paid him this tribute: "He was a man of enormous bark and absolutely no bite"

The author Nathaniel Benchley shared this observation: "Bogart achieved class through his integrity and his devotion to what he thought was right. He believed in being direct, simple, and honest, all on his own terms, and this ruffled some people and endeared him to others"

Angela Allen, who was working on the set of "The African Queen" in 1951, shared this anecdote: "We had British cuisine and so-called bottled water, which turned out later to be foul and had given everybody dysentery. Not Huston and Bogie, because they preferred to drink whisky. Quite rightly"

His widow Lauren Bacall shared this recollection: "What it felt like to be so wanted, so adored. No one had ever felt like that about me. It was all so dramatic, too. Always in the wee small hours when it seemed to Bogie and me that the world was ours, that we were the world. At those times, we were"

The director of the movie "To Have And Have Not" (1944) Howard Hawks said somewhat disapprovingly: "Bogie fell in love with the character she played, so she had to keep playing it the rest of her life"

Ingrid Bergman spoke of their time filming Casablanca (1942): "I kissed him, but I never knew him"

The novelist Raymond Chandler enthused about his lead for the character Philip Marlowe in the movie "The Big Sleep" (1946): "Bogart can be tough without a gun. Also, he has a sense of humor that contains that grating undertone of contempt"

The critic James Agate gave this assessment: "He has charm and he doesn't waste energy pretending to act. He has a sinister-rueful countenance that acts for him. He has an exciting personality and lets it do the work"

The director John Huston gave this wonderful eulogy: "Himself, he never took too seriously—his work most seriously. He regarded the somewhat gaudy figure of Bogart, the star, with an amused cynicism; Bogart, the actor, he held in deep respect ... In each of the fountains at Versailles there is a pike which keeps all the carp active; otherwise they would grow overfat and die. Bogie took rare delight in performing a similar duty in the fountains of Hollywood. Yet his victims seldom bore him any malice, and when they did, not for long. His shafts were fashioned only to stick into the outer layer of complacency, and not to penetrate through to the regions of the spirit where real injuries are done ... He is quite irreplaceable. There will never be another like him"

The author Stefan Kanfer spoke of his acting legacy: "Those in search of the Bogart style will have a hard time finding it in movie theatres. Today it flourishes elsewhere: in the principled action of individuals uncomfortable with compromise and conformity, in classic fiction, in the theatre. And of course in old films"

The actor Clifton Webb once said: "Humphrey was not a tough guy, He was not at all. He was about as tough as Little Lord Fauntleroy" 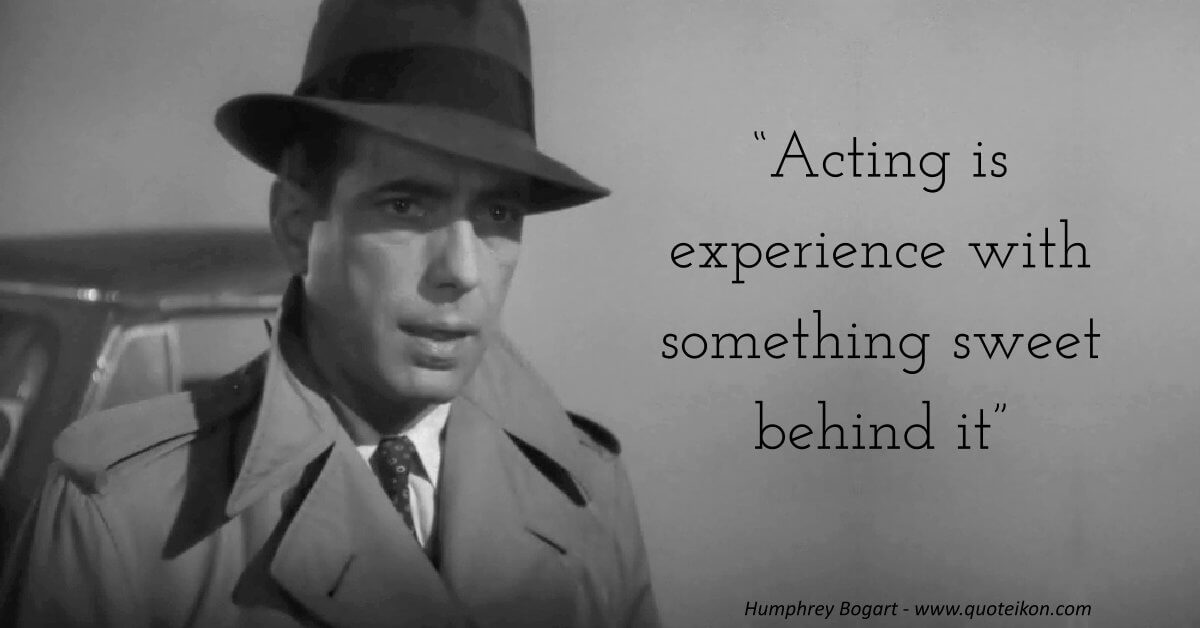