When James Dean burst onto the Hollywood scene in 1955 it was like a light being switched on inside the consciousness of American youth who easily identified with his non-conforming characters in search of ever elusive answers to their teenage angst.

Before he set foot on a Hollywood set Dean had learned his trade in New York's Actors Studio and worked on numerous television programmes and was cast in roles for two Broadway plays: the short lived "See The Jaguar" in 1952 and "The Immoralist" in 1954.

His big break came when he was cast for "East Of Eden" in 1954 when the director Elia Kazan was searching for a young actor with the intensity of a Brando and the authenticity of a Montgomery Clift. In James Dean he got both, and so much more as the young actor took his method acting training to a new level as he engrossed himself in the complex character of Cal Trask whilst adding his own trademark spontaneity.

The movie industry sensed they had a star in the making on their hands as the camera caressed his chiselled looks that gave an aura of vulnerability beneath the effortless cool he projected. The director Elia Kazan gave Dean a licence to be creative with each scene and he stamped his touch across the Californian backdrop with a performance that delighted critics and endeared him to the cinema goers.

The next James Dean movie came in 1955 with the iconic "Rebel Without A Cause" that was released weeks after his death and did much to create the iconic image that has endured into the 21st century. Playing the rebellious teenager Jim Stark, Dean took to the role with astonishing ease and teenage America flocked to the cinema in their droves as they saw so many similarities between the issues Stark faced and their own lives where they often conceal vulnerability underneath a facade of cool. The fact he was dead when the movie was released began fuelling the myth behind his image as the makings of a cultural icon started moving like a runaway freight train.

His tripartite of movies was complete with the release of "Giant" in 1956 and it's reception ensured perpetuation of the myth behind James Dean as he was now entering into the realms of folklore with legendary status. Starring with Elizabeth Taylor and Rock Hudson, James Dean wore his brooding cowboy hat with aplomb as he went from a misunderstood cowhand to an rich oil baron struggling with acceptance issues with the neighbours while battling alcohol addiction and his own mind.

His riveting on screen presence in "Giant" underlined his reputation as it hit home in the hearts and minds of Americans that this is the last ever Jimmy Dean movie and they took that home with them and never forgot it. His status as a cultural icon was intact as his movie's became a part of cinematic history with an emotional attachment that asked the question of what could have been if he had lived.

James Dean crafted his own spontaneous version of method acting by tapping into his emotions whilst concentrating in the moment scene by scene to achieve an intensity of screen presence that has inspired every generation of actors since.

He was the epitome of American cool who delivered his lines with a distinctive edge, off screen he was good for a one liner also so this is my compilation of 18 of the best James Dean quotes.

Natalie Wood gave this assessment: "All of us were touched by Jimmy, and he was touched by greatness"

Elizabeth Taylor spoke of his vulnerable side: "He was very afraid of being hurt. He was afraid of opening up in case it was turned around and used against him"

Martin Landau shared fond memories: "Jimmy was a very close and good friend of mine. I have fond memories of Jim, the days we spent together in New York City as young actors — walking the streets and talking about the theater and wondering about our next job, reading books and discussing them; seeing plays, seeing films; working in acting workshops and being serious young fellows about the thing we loved most, which was acting in the theater and films"

Humphrey Bogart spoke of his iconic screen legacy: "Dean died at just the right time. He left behind a legend. If he had lived, he'd never have been able to live up to his publicity"

Dennis Hopper shared this observation: "Every time I go to Europe, I remember that James Dean never saw Europe, but yet I see his face everywhere. There's James Dean, Humphrey Bogart and Marilyn Monroe - windows of the Champs Elysees, discos in the south of Spain, restaurants in Sweden, t-shirts in Moscow. My life was confused and disoriented for years by his passing. My sense of destiny destroyed - the great films he would have directed, the great performances he would have given, the great humanitarian he would have become, and yet, he's the greatest actor and star I have ever known"

Dennis Hopper then summed him up thus: "He seemed to capture that moment of youth, that moment where we're all desperately seeking to find ourselves"

Eartha Kitt spoke of their friendship: "Jamie and I were like brother and sister. He told me in fact he thought of me as a sister. Our relationship was strictly platonic and spiritual"

Paul Newman talked of his class mates at the Actors Studio: "It wasn't so much a matter of whom I was acting with, it was whom I was watching. Marlon Brando, Maureen Stapleton, Geraldine Page, Jimmy Dean, a pretty hotshot group"

Al Pacino found inspiration: "Actually, the person I related to was James Dean. I grew up with the Dean thing. Rebel Without A Cause had a very powerful effect on me" 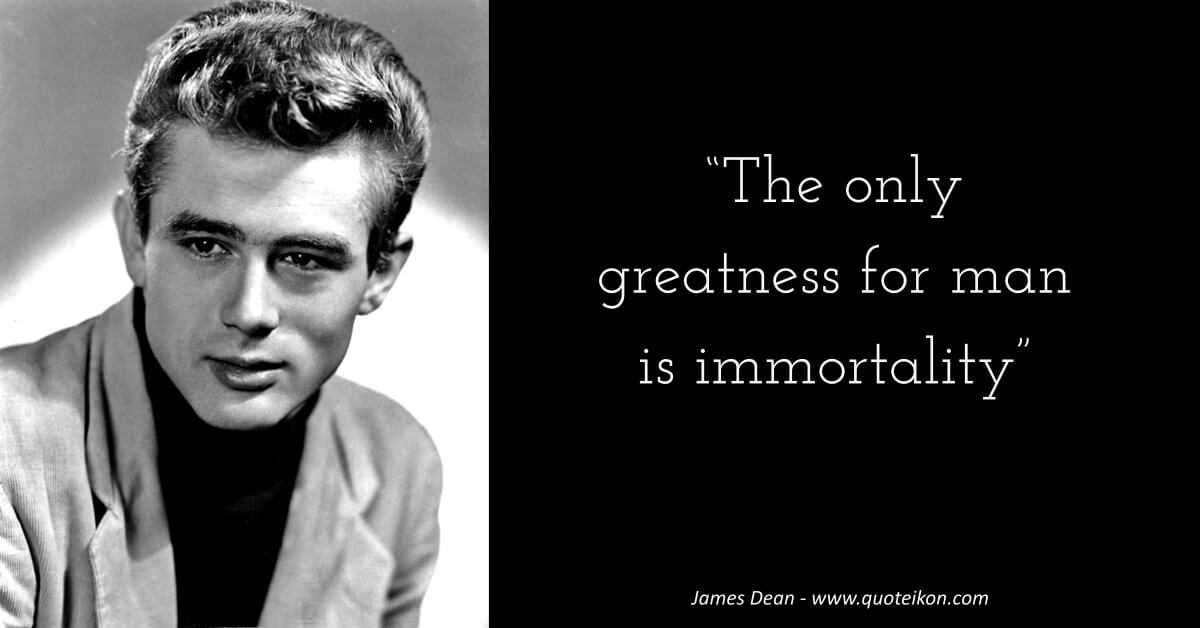