They say heroes are born not made but they have to grow great to be remembered whereas legends are from the same stock but their greatness surpasses the realms of the extraordinary into the folklore of a people never to be forgotten and herein lays the legacy of Michael Collins the Irish patriot who achieved legendary status with his selfless actions that led to Ireland breaking the chains of English bondage that had withstood every challenge for seven centuries.

Through the centuries there were dozens of rebellions that were all repelled by the British empire, from Thomas FitzGerald in 1534, Felim O'Neill in 1641, Wolfe Tone in 1798 and Robert Emmet in 1803 to name but a few. Although the ill fated Easter Rising in 1916 also ended in failure and the execution of seven of the leaders it did generate a great deal of public sympathy and the surviving leaders could sense the swell of nationalistic opinion and they realised they had to seize the moment to keep the momentum going.

For his part in the Easter Rising Michaels Collins was jailed in the Frongoch internment camp where he masterminded a non-cooperation protest against his jailers that resulted in a substantial rise in reputation where he gained the respect of fellow rebels. Upon his release in December 1916 Michael Collins aligned himself with the independence movement forces of Arthur Griffith and stood for election in 1918 which Sinn Féin won with a majority of Irish seats and they announced they would not sit in Westminster but they would set up their own parliament in Ireland instead.

The British arranged for the arrests of these MP's before they could officially meet but Collin's had been tipped off and although he warned his colleagues to take evasive action many did not which resulted in their arrest including Eamon de Valera who was taken out of Ireland and jailed in Lincoln prison. The first Irish parliament (Dáil Éireann) convened in De Valera's absence but he did not have to wait long to take his place as president of the Dáil because Michael Collins carried out a daring jail break whereby he freed De Valera from Lincoln prison and arranged his safe passage back across the Irish Sea to the Emerald Isle.

This was the beginning of the War Of Independence where Michael Collins orchestrated a guerilla war so successful against the forces and agents of Britain that within two years British Prime Minister David Lloyd George offered a truce and for the first time in more 700 years of attempting to win their freedom an opportunity arose that was too good to turn down.

What Lloyd George was offering was not a clean break with a Republic but a Free State in a partitioned compromise giving them power over Southern Ireland whilst the British retained the six counties in the north. Éamon de Valera and Michael Collins both realised that this compromise would never be accepted by all and would cause bitter division within the independence movement. They also realised that to achieve full independence they must grasp this opportunity while it was being offered as they did not want risk one of the alternatives that would have been the imposition of martial law. De Valera played Machiavellian politics and sent a delegation led by Michael Collins and Arthur Griffith to London to negotiate a peace treaty and giving them the authority to sign a deal.

Michael Collins and de Valera both understood implicitly what was at stake, for Collins he openly admitted he would be signing his own death warrant as the devious de Valera wanted a scapegoat to preserve his long term political ambitions. Collins bit the bullet and in the spirit of a dutiful soldier obeying orders he went to London to face a British government that had just months before placed a £10,000 bounty on his head. He was a soldier not a politician but he understood the magnitude of the situation and in the long battle for independence someone had to sign the document with the bitter enemy and he was never going to turn down the first step towards independence.

The Anglo-Irish Treaty which was signed on 6th December 1921 and after protracted negotiations to keep the peace failed the Free State of Ireland was plunged into a bloody civil war. The free state army quickly got the upper hand but with Collins frequently offering the olive branch of peace he was continually putting himself at risk by attending negotiations in person. On the night of 22nd August 1922 he met his fateful end as he was mortally wounded by a snipers bullet on the side of a road in Béal na Bláth, county Cork.

It was a sad day for Ireland and its people who were in a state of shock at the news of the big fellow's demise, Ireland had not just lost a loyal son of its soil, but a legend whose guerilla tactics against the British were copied by every freedom fighting nation for the remainder of the twentieth century. In an ironic comparison of freedom fighters and terrorists it was an Irish bullet fired by a soldier that fought for Collins in the Irish War Of Independence that took down the legend known as The Big Fellow in his home county of Cork.

Gone but never forgotten, Michael Collins lives on in tales of his heroic deeds and inspirational leadership, he was Irishman that achieved what many heroes before him failed to do in that he got the British, who still had empire across the globe, to admit it was no longer tenable for them to continue to govern Ireland, which had always been in the eyes of an empire a small island just a short boat ride from their mighty shore. Freedom fighting apart, he was good for a one liner also so this is my compilation of 21 of the best Michael Collins quotes.

Winston Churchill was moved to say: "He was an Irish patriot, true and fearless… When in future times the Irish Free State is not only prosperous and happy, but an active and annealing force… regard will be paid by widening circles to his life and to his death"

Éamon de Valera gave this assessment: "It is my considered opinion that in the fullness of time history will record the greatness of Michael Collins; and it will be recorded at my expense"

David Lloyd George paid this tribute: "His engaging personality won friendships even amongst those who first met him as foes, and to all who met him the news of his death comes as a personal sorrow"

Arthur Griffith was impressed to say: "He was the man whose matchless energy, whose indomitable will, carried Ireland through the terrible crisis; and though I have not now, and never had, an ambition about either political affairs or history, if my name is to go down in history I want it to be associated with the name of Michael Collins"

The author Rex Taylor shared this observation: "There was a touch of the Napoleonic in Collins’ military brilliance. He used thorough, unorthodox methods to beat his enemy, giving tactical lessons which have not been lost since his time on other guerilla fighters in many parts of the world"

The author James MacKay talked of his intimidating side: "A tongue-lashing from Michael Collins was a terrifying experience. It cowed many, but left others sullen and resentful. Magnified in scale as well as time, this abrasive quality would make for Michael many enemies"

The historian Edward Norman spoke of his impulsive nature: "Collins was a man of violent impulse who liked nothing so much as to tumble his colleagues on the floor and to bite their ears in playful affection" 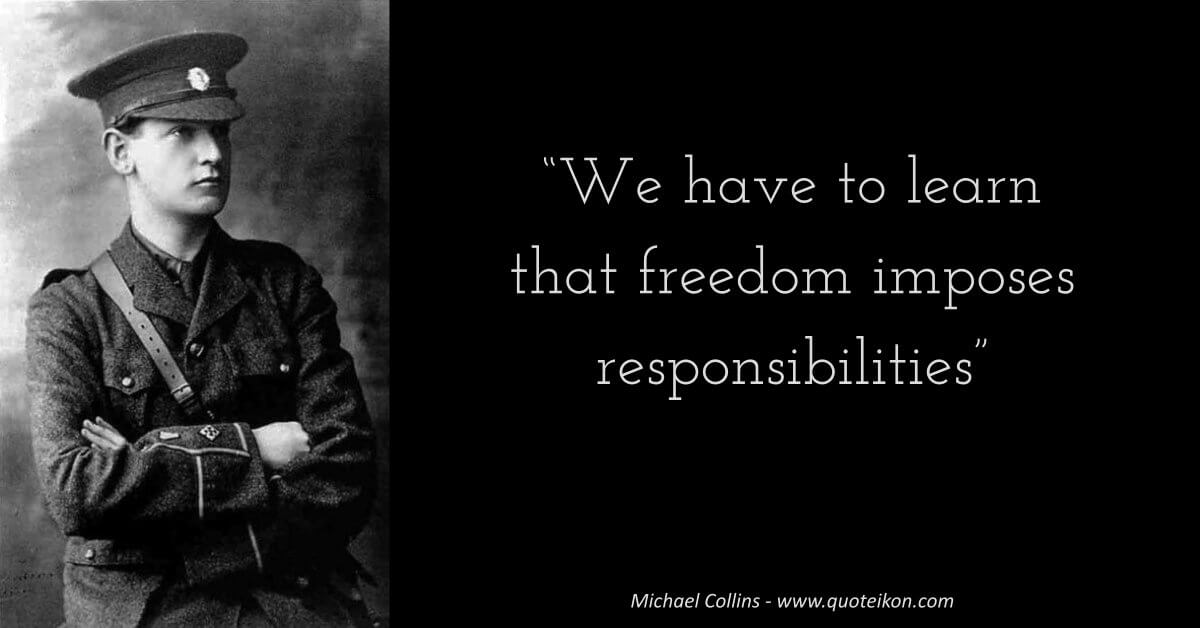