Unbelievable comebacks are nothing new to the game of politics where even the most implausible things are usually meticulously planned and implemented and such was the unlikely rise of Éamon de Valera against insurmountable odds to dominate Irish politics for six decades of the twentieth century.

However it was not all political manoeuvring that propelled de Valera to the forefront of Irish politics as the proverbial luck of the Irish, or in his case American's, played its part as his birth certificate traversed the Atlantic Ocean to save him from the firing squad in the aftermath of the 1916 Easter uprising that saw the bloody execution of all the leaders bar one. Although the 3rd battalion of the Dublin brigade he led during the uprising were successful in their mission and were the last to surrender, his life was saved by a mixture of the British viewing him as unimportant, lacking a hardcore Fenian background and the political pressure of the U.S. not wanting one of their citizens executed whilst the British were courting them to enter the fray of WW1.

Impeccable timing was a trait of this unlikely Irish leader who upon his release from the British penal system in 1917 was thrust into the limelight as the hero of the insurrection and promptly elected President of Sinn Féin. The subsequent years were turbulent and his decision to reject the 1921 Anglo-Irish Treaty that his delegation signed caused ructions that proved so divisive that the ego's of the politically challenged saw no alternative to bloodshed and the Irish civil war was a battle Dev was to lose but prove to be his ultimate path to power.

De Valera knew that the British prime minister David Lloyd George would allow a Free State but be opposed to a Republic and this was the reason he did not attend the negotiations where Arthur Griffith and Michael Collins signed the treaty, in his own words he "needed scapegoats".

After de Valera's defeat in the civil war he was jailed in 1923 and released in 1924 whereby he negotiated with Sinn Féin to adopt a policy to turn the Free State from a constitutional monarchy into a republic but to no avail. Unperturbed he resigned from Sinn Fein and wasted no time in founding the Fianna Fáil political party with Seán Lemass in 1926. His goal was to be elected into parliament and work from within by turning the free state into a republic and the 1927 election was a watershed moment that saw Fianna Fáil gain 44 seats and give them political momentum to work towards the next general election.

In the 1932 general election Fianna Fáil won 72 seats making them the largest party but without a majority so the following year de Valera called for another election where his party won 77 seats giving them the majority they needed to implement the party's policies. Eamon de Valera's Fianna Fáil consolidated their position in the subsequent elections in 1937, 1938, 1943, and 1944 that established them as the bedrock of the Irish political system.

Under his Machiavellian leadership he was prime minister for 21 years and leader of the opposition for 6 years until he stood back from front line politics in 1959 to take up the role of president. As a leader he was as divisive as all good politicians are but he always put the party and Ireland before his own interests which explains his longevity in the political arena.

Even today he is as divisive as ever with historians arguing over his legacy as his influence and political standing are being reimagined to suit the present day and future of Ireland from differing standpoints. As a cunning politician he was always good for a one liner, so here is my compilation of 17 of the best Eamon de Valera quotes

In 1922 the French consul to Dublin Alfred Blanche was full of his praises: "In reality, Eamon de Valera, the only true statesman of Ireland, without whom no government or national party will be able to maintain itself, is once again the master of the hour"

In 1940 the American ambassador to Ireland David Gray spoke glowingly: "He is probably the most adroit politician in Europe and he honestly believes that all he does is for the good of his country. He has the qualities of martyr, fanatic and Machiavelli. No-one can outwit, frighten or blandish him"

The British prime minister David Lloyd George was scathingly complimentary: "He is like lifting mercury with a fork"

The historian Tim Pat Coogan explained him thus: "He planned to ensure that much more favourable comment and chronology would be collated and set down. He had fashioned a vigorous dialectic of de Valerism that would bulwark him against critical re-appraisal long into the future"

The Irish patriot Michael Collins said quite dryly: "How could one argue with a man who was always drawing lines and circles to explain the position" 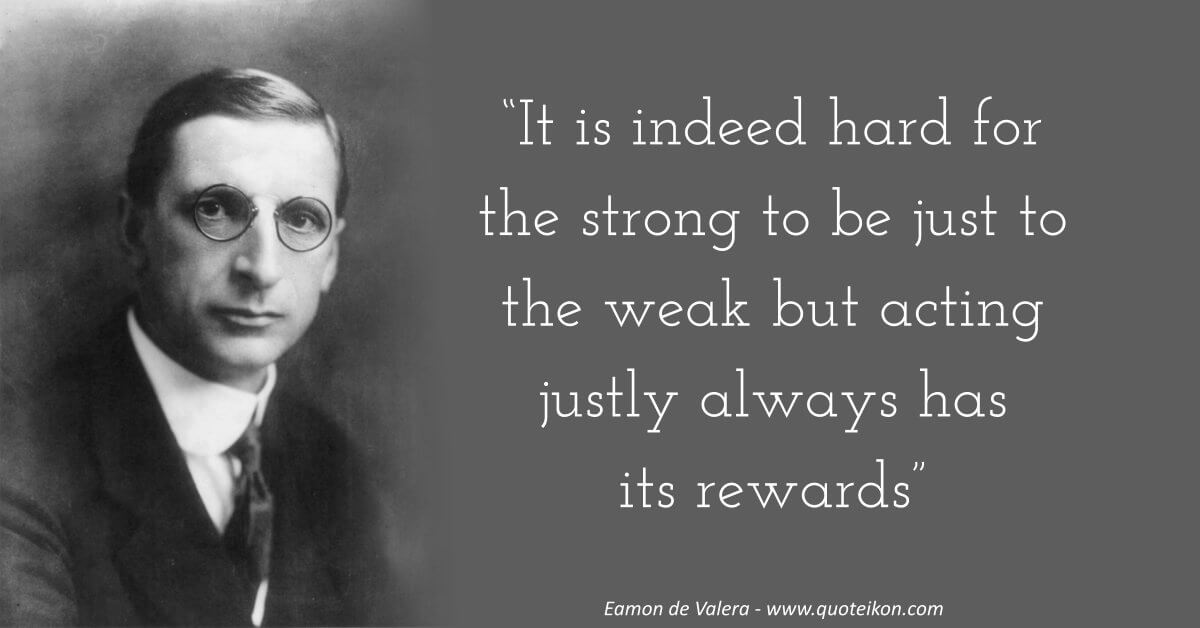