With just a cursory glance at the 20th century history of The Troubles in Northern Ireland will tell a tale of sectarianism between catholics and protestants with the former fighting for a United Ireland and the latter fighting to stay part of the United Kingdom. It is rather ironic that the man who started the Irish republican movement for an independent Ireland in the 18th century was a protestant by the name of Wolfe Tone.

Tone was the co-founder of the Society of United Irishmen who enjoyed support from both sides of the religious divide as he envisioned an independent Ireland from their colonial masters for all Irish people regardless of their religion. He was a determined freedom fighter that enlisted the help of the French who in 1796 sent a fleet of ships with nearly 15,000 men armed to the teeth to start the Irish uprising. However strong winds did not allow the ships to land and much to the disappointment of Wolfe Tone they turned tail and went back to France.

1797 saw a repeat performance with a farcical attempt by the Dutch to land ships to start the rebellion again thwarted by strong winds. The Irish could wait no longer and in 1798 without the full support of their French allies they decided to take the fight to the British, but on the eve of the rebellion the British whose spies had informed them of the plot struck first with mass arrests around the country.

The Irish rebellion got off to a bad start but they soldiered on fighting for 6 months from May 1798 until their final defeat in October of the same year. Tone was captured by the British after a naval skirmish between a small French force and the might of the British navy ended in defeat. Although dressed as a French general he was quickly identified and while the French prisoners were traded for British prisoners of war, Tone was imprisoned to await his fate after a show trial by the British.

Wolfe used the trial as an opportunity to make eloquent speeches denouncing the British tyranny over the Irish and he requested an honourable soldiers death by firing squad. However the British did not want to make a martyr of him so they sought to set an example to others with a public hanging.

Wolfe Tone did not grant the British their wish as he committed suicide by slashing his throat in Provost's Prison in Dublin and in so doing he cemented himself in Irish history as the freedom fighter who is now regarded as the father of the Irish Republican movement. Bravery and integrity apart he was also good for a one liner, so here is my compilation of 17 of the best Wolfe Tone quotes.

The 19th-century historian William Lecky was impressed to say: "He rises far above the dreary level of commonplace which Irish conspiracy in general presents… His judgement of men and things was keen, lucid and masculine, and he was alike prompt in decision and brave in action" 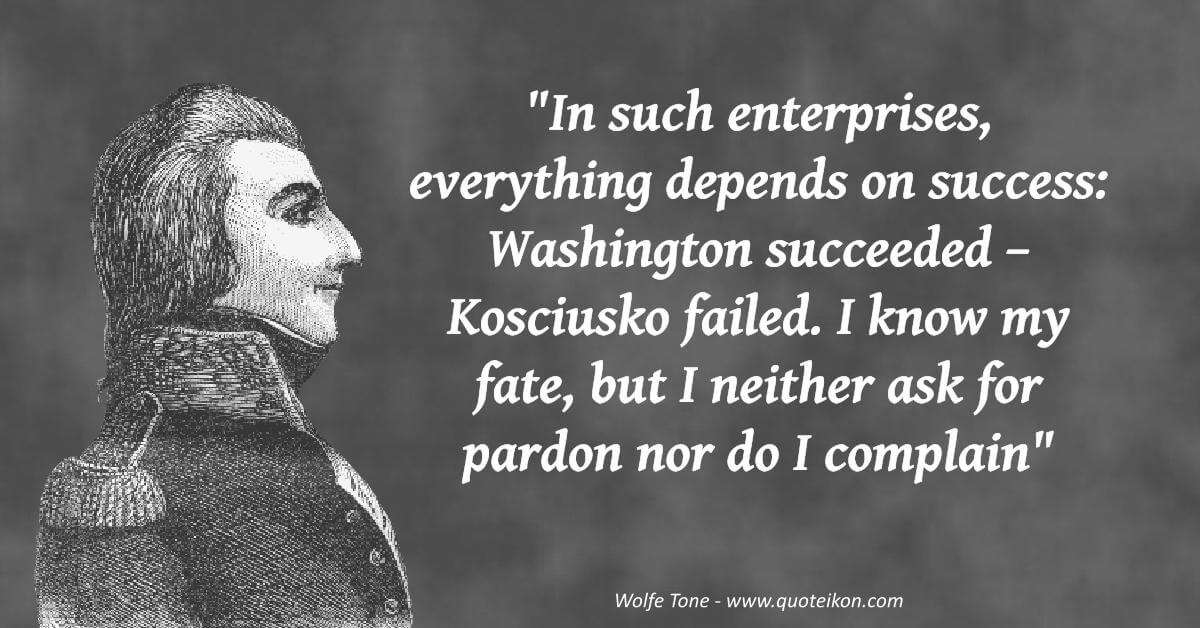