Arthur Griffith was the Dublin boy with a passionate love of his country that drove him to the forefront of the struggle for Irish independence. In the 1890's he wrote editorials for the United Irishman urging the populace to believe that self government would be advantageous to all Irishmen. His writings encouraged a non violent approach to independence and he further fuelled national pride by promoting Gaelic culture at every opportunity.

In 1905 he founded Sinn Féin and despite his intense promotion of the party it gained little traction with the Irish people. In 1913 he joined the Irish Volunteer Force and although he had an involvement in gun running that was about as close as he ever got to being in the firing line of battle. The 1916 uprising came as a surprise to Griffith and even though he was not involved the British made the mistake of arresting him for encouraging Irish independence.

The upshot of this was Sinn Féin was boosted by a wave of support and it set in motion a fervour for independence that proved irresistible to the Irish but became too uncomfortable for the British. The Anglo-Irish war began in 1919 and lasted 2 years until a ceasefire was agreed and he headed the negotiations for an independent Ireland that resulted in the Anglo-Irish Treaty on 6th December 1921.

Ireland was at long last a self governing free state but there were different factions that caused a brief civil war between those who were for the treaty and those who were against it including the Machiavellian politician Eamon de Valera, unfortunately Arthur died before its conclusion so despite his unrelenting work towards liberty he did not live to see a free and pacified Ireland. From great libertarians often come great one liners so here is my compilation of 11 of the best Arthur Griffith quotes

British Prime minister David Lloyd George rated his talents highly: :Never have I had such great minds around me — Smuts, Balfour, Bonar Law...and Curzon. Curzon was perhaps not a great man, but he was a supreme Civil Servant. Compared to these men, the front benches of today are pigmies"

His Irish revolutionary comrade Michael Collins was impressed to say: "In Arthur Griffith there is a mighty force in Ireland. He has none of the wildness of some I could name. Instead there is an abundance of wisdom and an awareness of things which are Ireland"

Irish politician Kevin O’ Shiel described him as: "master of a superb and enviable prose style – simple, concise and as clear and fresh as a spring well"

Both Charles Stewart Parnell and Griffiths were mentioned in the James Joyce novel Ulysses: "You must have a certain satisfaction: Parnell. Arthur Griffith is a square headed fellow but he has no go in him for the mob"

The Earl of Birkenhead, British negotiator in the Treaty was quoted as saying about him: "A braver man than Arthur Griffith, I never met" 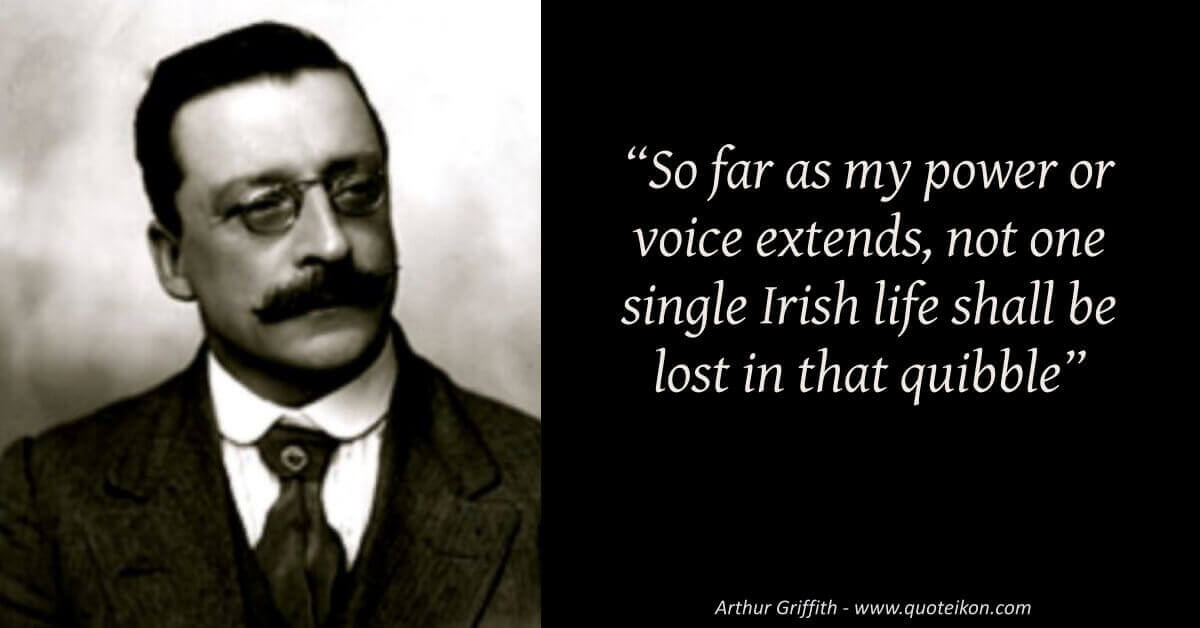