She was billed as Britain's bad girl. An emerald eyed starlet who smouldered on screen and spliced her way through five spouses with a smiling shrug. Her name was Joan Collins. An actress whose talent matched her beauty whilst her tongue 'twould tease the tabloids.

Talent with beauty is a rare commodity in Hollywood, it always has been. Being blessed with such gifts does not guarantee a starring role. More often than not, the choice is a long grind or the casting couch. Joan Collins may have had a racy reputation in the media, but, when producers offered A-list roles for sexual gratification she turned them down.

From a young age Joan was an aspiring thespian who learned her trade in theatre. From stage to screen was but a small step as the J. Arthur Rank Organization signed her to an exclusive movie contract.

Her screen debut was a small part in the 1951 comedy "Lady Godiva Rides Again" which featured another British beauty Diana Dors. Joan's first credited role was in 1952 playing the part of Norma Hart in "I Believe In You".

The early fifties was a time for Ms Collins to establish her name. Producers from across the pond took note as the legendary director Howard Hawks cast Joan as Princess Nellifer for "Land of the Pharaohs" which was eventually released in 1955. Collins on-screen sultry presence caught the eye of Darryl F. Zanuck who quickly signed her on contract with Twentieth Century Fox.

Joan Collins was a 21 year old ambitious actress when she first landed in Hollywood in 1954. Even by Tinseltown's standards her breathtaking beauty stood out.

It was not just beauty, Collins had a screen presence and physical performance that reached out to audiences and made such an impression it was only a matter of time before her first starring role came about.

Her first big break as a leading actress came when the studio's first choice leading lady turned down the starring role in the 1955 movie "The Girl In The Red Velvet Swing". Collins was in the right place at the right time and gratefully accepted the challenge of stepping into Hollywood's finest stilettoes as Marilyn Monroe was the actress who was the studio's initial choice.

Things were looking up, in her next starring role she was afforded equal billing with the Hollywood legend Bette Davis in "The Virgin Queen" (1955). During the fifties, the Collins portfolio of movies was growing with appearances in hits such as "Island in the Sun" which was the sixth-highest-grossing film of 1957 and The Bravados (1958) starring opposite Gregory Peck.

Not everything went to plan. Collins was disappointed when 20th Century Fox decided to overlook her undoubted talents in favour of Elizabeth Taylor to play the title role in the epic "Cleopatra". The show must go on, so Joan joined the cast of the Bing Crosby and Bob Hope "road" movies in the 1962 caper "The Road To Hong Kong".

Joan decided to devote some time to her family before reviving her career later in the decade with memorable TV roles in Batman and Star Trek. The starring roles were drying up. The decade turned to the seventies but the great roles never came. Her career hit rock bottom with the 1977 movie "Empire of the Ants". This was a turning point.

Everything changed in 1978. In a collaboration with her sister Jackie, who was the author of a 1969 novel called "The Stud", Joan was granted the film rights and "The Stud" was released to sensational acclaim. The movie was a worldwide hit grossing more than $20 million USD.

The Stud was a risque movie where Joan was required to do nude scenes which was a big ask of a mature actress in her mid-forties. Collins played the part with a spell binding seductive allure. There was a follow up movie using another Jackie Collins novel called "The Bitch" which was another box office hit.

The Joan Collins star was back in ascendency and even greater critical acclaim would soon follow.

In a night time battle of the soap opera's, Dallas on CBS was trouncing Dynasty on ABC and the latter urgently needed to add some star quality to improve ratings.

ABC were considering hiring Raquel Welch or Sophia Loren. The producer Esther Shapiro had other ideas. She saw the glint in the Collins eye and recognised that combining Joan's glamourous presence with the acid tongue of an English beauty was the solution Dynasty required.

Joan was made for the part of Alexis Carrington. Indeed, Shapiro created the character of Alexis with Collins in mind. She effortlessly slipped into the furs, the hats and the veils resulting in a preening performance of unadulterated glamour. Her manicured nails clawed their way through Denver as a femme fatale predator unlike anything seen before on prime-time TV.

The reviews were as fabulous as her pumped up shoulder pads. Joan Collins became Dynasty dynamite to a Dallas debacle. She won a Golden Globe and was nominated a further five times for this coveted award. She cleaned up at the Soap Opera Digest Awards by winning the coveted Outstanding Villainess award in both 1984 and 1985.

Joan Collins was in demand. In 1983 she stunned the world by posing for Playboy. The stunning images revealed when it came to Ms Collins that 50 was now the new 30.

Post Dynasty, Joan Collins busied herself on the stage with highlights including "Love Letters" (2000) and "Legends" (2006-2007). There were numerous TV roles and appearances whilst she got to choose from a plethora of silver screen parts at her leisure.

The Joan Collins roadshow continues unabated as she approaches her 90th year still an active actress with no notion of retirement. Meaning her legacy is still being added tSophia Loreno. In maturity she retained her regal air of authority and fabulous looks on and off the screen.

She was the face of Cinzano and British Airways. Her star quality oozed through six decades of thespian fame and silver screen adulation. Few actresses are equipped with the quick wit, beauty and unassailable spirit of this star studded icon who inspired me to create this page of Joan Collins quotes and alternative biography.

The actress Stephanie Beacham described her thus: "When Joan walked into Dynasty, she ate the furniture. She tore it up"

Beacham also commented on being out-diva-ed: "Joan always managed to be a bigger diva than me. You might find me slouching around in Ugg boots. You wouldn’t find Joan doing that"

Stephanie telling it like it is: "Let's face it, Joan and I both made fortunes from being bitches"

Marilyn Monroe offered Joan this advice: "beware of the wolves in Hollywood honey, because if they don't get what they want they'll cancel your contract"

Marilyn went on to say: "Don't let the studio big guys dictate to you. You're just a piece of meat to them. We all are"

The actress Joanne Woodward advised her about the lothario Warren Beatty: "If you have a relationship with a libidinous 22-year-old, you’d better let him. Otherwise he’ll look for other avenues, as it were"

Elizabeth Taylor shared this gift suggestion: "Careers don't last you know, they go up and down. You need to get a present when your career is up and when it's down you can recall how good it was from the amount of presents you have"

The Dynasty producer, Aaron Spelling, was impressed to say: "We didn't write Joan Collins. She played Joan Collins. Am I right? We wrote a character, but the character could have been played by 50 people and 49 of them would have failed. She made it work"

The journalist Julie Burchill shared this view: "Never much of an actress, she seems to exist as a moving museum exhibit, a tabloid tableaux forever showing the skinny stars of the modern cinema what star quality really is"

Burchill went on to say: "When she talks about being a survivor, she knows what she's talking about; she's not some little fraud who's had one broken engagement and two broken fingernails, and thinks it's the end of the world. It doesn't matter how bad her books are, how wanton her wigs or how silly her mini-series. At the risk of being just a tiny bit gay for once, she's "Our Joanie" - and she's fabulous"

Her sister, Jackie, made this observation back in 1953: "I get an awful inferiority complex when I’m with Joan"

The journalist, James Wolcott, shared this vivid description: "Collins, is the sort of woman who seems born to swing from chandeliers as geysers of freshly popped champagne flare in tribute"

Tabloid headline after Joan's fifth marriage: "Joan says I do to young Percy from Peru"

The writer, Gore Vidal, was an admirer of her talents: "In addition to being smart, funny, warm, and beautiful, Joan is also very talented. It’s annoying that she has never been taken more seriously as an actress"

A Variety critic concurred with this description: "Joan Collins is a captivating, bundle of sex appeal" 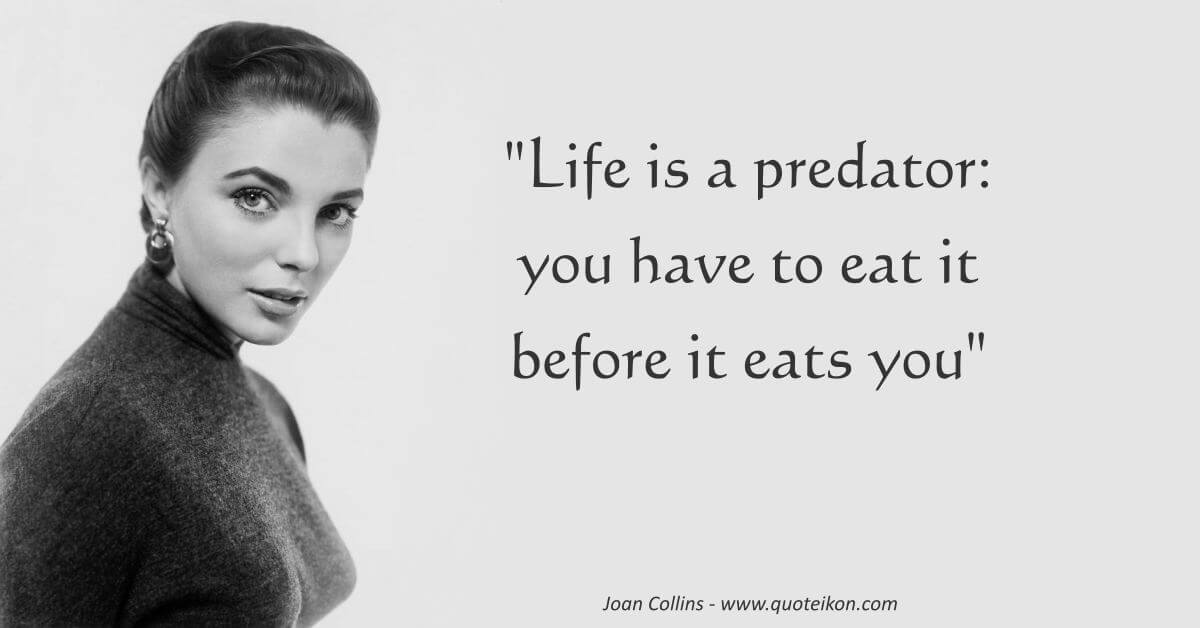