"She did it the hard way" is the epitaph on the tombstone of the actress Bette Davis who fought tooth and manicured nail both on and off screen to attain legendary status during the epic era of The Golden Age Of Hollywood. Bette was as tough as they come as she earned a reputation as a tempestuous actress whose piercing eyes bulged out of her face with an intensity that could have won an optical Oscar in their own right.

After being rebuked during early auditions Davis had the courage and confidence to persist which was paid off when the actor George Arliss recommended her for the lead role in the 1932 movie "The Man Who Played God" for which she received good reviews that led to a five year contract with Warner Brothers.

Bette Davis seized this opportunity and before the decade was out she had won two Academy Awards for Best Actress for the 1935 movie "Dangerous" and the 1938 classic "Jezebel". Her career soared and although she never won another Oscar she did become the first person to achieve 10 Academy Award nominations with the last being for best actress for her role in the 1962 film "What Ever Happened to Baby Jane?".

It was tantrums and tiara's all the way as the evening gloves often came off because she was prepared to slug it out with actresses and studios alike as she always stood to fight her corner as in the 1937 legal case where she unsuccessfully tried to free herself from her Warner Brothers contract. Although she lost this battle she won the war as Warner Brothers gave Davis more say in the roles offered to her which resulted in her rewarding the studio with some of the best acting of the era.

Following the legal battle her roles improved and it was no coincidence that she won the 1938 Academy Award and after "Jezebel" Davis was nominated for best actress in every subsequent year until 1942 making her the first person to be nominated for five years running during what is widely considered as the most successful period of her career.

Bette was more sassy than sissy and woe betide anyone on set that was to cross the steely glare of this caustic tongued thespian as Marilyn Monroe found out to her cost on the set of the 1950 movie "All About Eve" whereby she became the victim of a Davis verbal onslaught for fluffing her lines one time too many.

Then there were the legendary feuds with the feisty tirade with Joan Crawford still being one of the most talked about cat fights in Hollywood history. The feud had been simmering since the late 1930's but when Joan Crawford signed for Warner Brothers in 1943 they were not just competing for Oscars they were now competing for the best leading roles so it was no surprise for the claws to come out. Bette once famously said: "Why am I so good at playing bitches? I think it's because I'm not a bitch. Maybe that's why Joan Crawford always plays ladies" and then there was the immortal line: "The best time I ever had with Joan Crawford was when I pushed her down the stairs in What Ever Happened to Baby Jane?"

Indeed Bette had become the queen of the super-bitch flick with her towering roles in "Jezebel", "The Letter" and "The Little Foxes" but the world and Hollywood's leading ladies were to find out she wasn't just acting as she took her fiery talent off screen to pour scorn on any rival she had in her cross hairs.

Bette Davis was once quoted as saying: "If you don’t dare to be hated, you’re never going to get there. Never!" and true to her word she played this role with such relish she filled the gossip columns with recalcitrant wit to which her victims would always respond but never surpass.

During one interview Bette even admitted: "I was insufferably rude and ill-mannered in the cultivation of my career. I had no time for pleasantries. I said what was on my mind, and it wasn't always printable", she had the single minded quality and vision to understand what she wanted and she just went for it.

Bette Davis rose the bar for actresses with her attention to detail, suddenly lighting a cigarette became a work of art and no one could drop a mink coat with the same panache as she or transform a look of neurosis to a bewitching stare of beguiling beauty that defied the norm yet tantalised with intrigue.

Her legacy is of an acclaimed Hollywood actress whose influence has endured in tandem with her classic movies and she was always ready with a caustic quip so this is my compilation of 20 of the best Bette Davis quotes.

Arch rival Joan Crawford was quoted as saying: "Miss Davis was always partial to covering up her face in motion pictures. She called it ‘art.’ Others might call it camouflage - a cover-up for the absence of any real beauty"

Humphrey Bogart quite openly felt intimidated: "Even when I was carrying a gun, she scared the be-jesus out of me"

Lauren Bacall paid her this compliment: "I always loved her. And I think that she - for me - was the best actress and the most exciting female star on the screen. I think her work will live forever. I think it's timeless"

The actor Errol Flynn felt her presence while filming "The Private Lives of Elizabeth and Essex" in 1939: "Bette was a dynamic creature, the great big star of the lot, but not physically my type; dominating everybody around, and especially me, or trying to. This drove me off. The normal reticence I feel with leading ladies was even exaggerated in this situation"

The critic Eileen Arbuthnot Robertson described her performance in the 1935 movie "Dangerous": "I think Bette Davis would probably have been burned as a witch if she had lived two or three hundred years ago. She gives the curious feeling of being charged with power which can find no ordinary outlet"

The novelist Graham Greene gave this assessment in 1936: "Even the most inconsiderable film ... seemed temporarily better than they were because of that precise, nervy voice, the pale ash-blond hair, the popping, neurotic eyes, a kind of corrupt and phosphorescent prettiness ... I would rather watch Miss Davis than any number of competent pictures"

Ronald Reagan paid her this tribute: "She gave us some of the most memorable moments in the history of film and touched us in a way few others have. For Bette, acting was more than a profession, it was an art"

The actress Olivia de Havilland was impressed to say: "She was a remarkable person to work with, highly professional, innovative, brilliant and quick. I thought she had some marvelous personal qualities, and I was very fond of her"

The actor Charles Laughton encouraged her to keep pushing the boundaries: "Never stop daring to hang yourself, Bette" 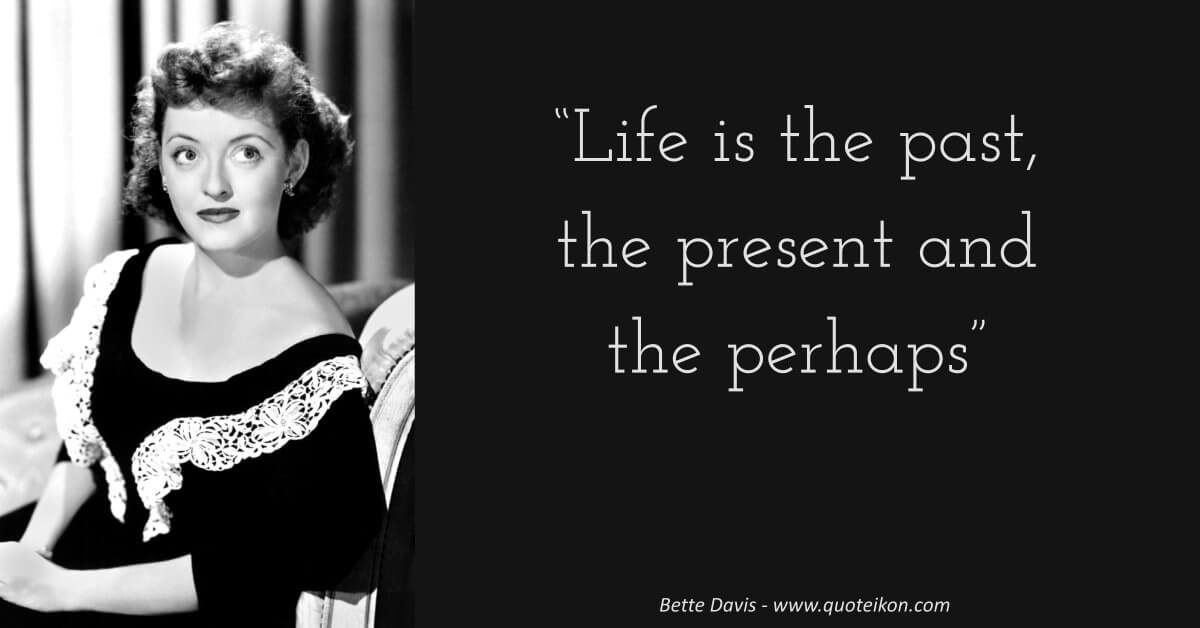