When musing the mull of Hollywood immortals there are stars, icons, symbols and goddesses. And then there is Sophia Loren. A Neapolitan delicacy so fine on film that Tinseltown afforded to bestow its highest honour to a foreign actress in her native tongue. Never before did the lustre of 'Oscar' cross the seas to reward such brilliance.

The movie was called "Two Women", released in 1961 to international acclaim for the star who stole the show, Sophia Loren.

Ten years prior to capturing the Best Actress Academy Award, Ms Loren was an awkward teenager posing nervously in a Roman beauty contest where she won a prize bigger than anything the judges awarded that day. She caught the eye of a successful movie producer called Carlo Ponti.

Ponti had an instinctive eye for talent and he recognised an alluring beauty in the irregular look of the youngster. He invited Sophia to a screen test and he liked what he saw. This was the beginning of a rise to fame so fabulous that you would think it was written in Hollywood.

The red carpet premiere's that were to come were a far cry from her poverty stricken upbringing in war torn Italy. Times were hard, food was scarce and Sophia had garnered the nickname Toothpick. Her mother Romilda was an aspiring actress whose good looks won a Greta Garbo lookalike contest. Single motherhood put paid to any hopes of a career in Italian cinema, but, her aspirations would live on through her daughter who she encouraged wholeheartedly. Sophia's future and the family fortune would change after meeting Ponti.

Carlo Ponti took Sophia under his wing and guided the early career of the aspiring actress. He would go on to become her manager, confidant and husband in a relationship that sustained for more than half a century.

Whilst Ponti recognised the raw talent, it took the guile of the director Vittorio De Sica to draw the magic out of Loren. It was 1954 and De Sica cast Sophia in his upcoming movie "The Gold of Naples", this would be her big break. The role was an unfaithful pizza seller and Loren was impassioned by De Sica to draw deep into her Neapolitan temperament to display a smorgasbord of simmering sensitivity.

De Sica worked hard to nurture the acting talents of Sophia Loren. He worked on her walk, her smile, her look and encouraged her to explore her full range of emotions. He was a good teacher, but this was a star pupil that was eager to learn.

And learn she did, although it could be said that Sophia Loren was not acting when she won her Academy Award. She knew the role first hand having lived through the misery of WWII and faced the hardships wrought on a society wracked by war. Her performance in "Two Women" was off the "wow" scale. It was as if the pent up emotion of five years of WWII misery had finally found a release valve through the character of Cesira.

The role of Cesira was anything but glamourous. But, this was the role that turned Loren from a beautiful ambitious starlet into an internationally renowned actress to be taken seriously.

From 1954 until 1974, Loren starred in 17 De Sica movies. Another staple of Loren's Italian movie career was Marcello Mastroianni who, coincidentally, also starred in 17 movies with Sophia, though not all were directed by De Sica.

There was a dynamic chemistry between Loren and Mastroianni. It was a nonchalant natural air of captivating magnetism between two expressive personalities. Whether it was drama, romance or comedy they opened up a distinctive duologue that shone through latin hearts worn on sleeves.

Ponti encouraged Loren to learn English. He then introduced her to Hollywood. She was billed as the Italian Marilyn Monroe. Producers did not know what to make of her when she first arrived. They recognised an intriguing look but Hollywood likes to typecast rather than test the limits of performance.

Loren would hone her trade in Hollywood, but it would be her return to Italian movies where she could really display her full range of acting abilities. In the meantime, there were many male hearts sent fluttering on set under the Californian sunshine.

Her Hollywood leading men were all enamoured by the Italian beauty. Sophia once admitted "I allowed them to fall in love with me, but never once did I fall in love with them". The smouldering Sophia melted the hearts of giants of the screen from Gregory Peck to Peter Sellers to Omar Sharif and of course the king of the charmers himself, Cary Grant was also completely smitten.

"The Pride and The Passion" was Sophia's introduction to a Hollywood production, albeit being filmed in Spain. Stanley Kramer was the director and Loren spoke glowingly of a fellow co-star: "Frank Sinatra made me feel at ease with that world, with everybody. He could not have been kinder or more friendly". While Sinatra provided the friendly face the other co-star was looking to get even friendlier.

The much speculated relationship with Cary Grant began in 1957 during the filming of "The Pride and the Passion". He wooed Sophia relentlessly. By 1958 Loren decided to make a break and marry Carlo Ponti. The disappointed Grant was magnanimous in the face of rejection and wished her well for her future. In the same year they both starred in the movie "Houseboat" and the on-screen chemistry between Grant and Loren did little to stem the flow of rumours that the affair was still on-going.

In her heart, the girl from Pozzuoli on the outskirts of Naples knew her future lay not in Hollywood but back in her beloved homeland of Italy. Carlo Ponti was many things to Sophia Loren. He had an air of authority about his persona and he filled the void of father figure whose absence had haunted Loren since childhood.

Above all Ponti gave her the constancy of consistently good decision making. Sophia Loren was quoted as saying "He gave me a rootedness and stability that kept me grounded, while the world around me seemed to swirl dizzyingly". A love developed that endured the relationship through the decades to come.

The wedding of Ponti and Loren would not be recognised in Italy. There were complications that would see them exiled from the country they loved until the 1980's. In 1982 she returned to Italy and faced politically targeted tax evasion accusations that resulted in an 18-day prison sentence. She regarded it as a small price to pay to be back in the land of la dolce vita, and, more importantly, to reunite with her mother again.

In 1983 she wrote her memoir "Yesterday, Today and Tomorrow - My Life". The books title was an echo of her 1963 Academy Award winning movie of the same name (minus 'my life') directed by Vittorio De Sica. In the movie Sophia played the role of Adelina of Naples, this expressed the origins of her yesterday. Today she is one of the last surviving screen legends of a golden age of Hollywood and still active after 8 decades of cinematic glory. Tomorrow is still unwritten, but her body of work ensures the legend of this screen goddess will remain intact into celluloid eternity.

With breathtaking beauty, passion and charisma the girl from Naples had it all. The critical lens of cinema saw her star rise and rise to the station of international icon and bequeathed a true legend to the pantheon of Italian cinema. Against the backdrop of humble characters, she had the ability to project an aura of grandeur grace with elegant meaning. She is the one and only Sophia Loren, the actress adored in Italian culture yet internationally acclaimed with world renown.

Italian director Vittorio de Sica was wowed after Sophia nailed the most memorable scene of the movie in one take (Two Women - 1960): "Let’s wrap up and go home. ..... You will never do it again because it was perfect"

Her co-star, Clark Gable, spoke of the 1960 Rom/Com 'It Started in Naples': "I had cast approval in this picture, and I okayed Loren. She’s very attractive, to my way of thinking, loaded with sex appeal"

When they met in 1958, the king of rock'n'roll Elvis Presley quipped to a reporter: "You know, I've seen every picture she's ever made. She's only seen one of mine"

The actor Peter O’Toole seemed famished in admiration: "The more I was with Sophia, the more edible she looked"

The author Anthony Burgess spoke of her alluring intrigue: "When I first met Sophia I was inclined to grovel on the carpet, but her humanity forbade it… She demands admiration more than worship. But admiration never seems quite enough"

The actor Cary Grant wrote in a letter to Sophia: "If you think and pray with me, for the same thing and purpose, all will be right and life will be good"

The writer, Alexandra Pollard, described her thus: "Sophia Loren is one of the most recognisable women on the planet, the kind of supernaturally gifted screen siren they don’t make anymore"

The actor Richard Burton was mesmerised as he remarked on her: "beautiful brown eyes set in a marvelously vulpine, almost satanic face"

The supermodel Bianca Balti took inspiration from her uniqueness: "I see beauty icons as women that can't be replicated. When you take someone like Sophia Loren I could never replicate her beauty and the dedication she had to looking a certain way. I love it, because I see it as the women from that time's form of self love, taking the time for themselves"

The writer, Luke Leitch, also thought her unique: "Sophia Loren could be nobody else but Sophia Loren. That gaze. That voice. And then after a few minutes, that laugh too"

The critic, Joey Nolfi, was impressed to say: "No one oozes Italian excellence like Oscar winner Sophia Loren"

The NYT critic, John J. O'Connor, acknowledged her talent: "Sophia Loren, one of an international handful of actors who can justifiably lay claim to the title of star"

The American film producer, Joseph E. Levine, recognised a winner so he bought the US release rights which led to a plethora of awards including the biggest of them all: "I bet Sophia she'd win the Oscar and I nursed that film like a baby"

It is amazing to think that an early screen test could come to such a conclusion about the sultry Italian beauty: "Her face is too short, her mouth is too big, and her nose is too long"

In reference to Sophia's producer husband Carlo Ponti, Gina Lollobrigida hissed: "I succeeded only thanks to myself, without any producer supporting me. I did everything alone"

The director Michael Winner made this interesting comparison: "Sophia is a great professional. She keeps working and she knows that, because of that, you'd better keep looking lovely. Brigitte Bardot is into saving cats. You don't need to look beautiful to pick up stray cats"

The writer Nancy Collins opined this description: "Sophia Loren is the most enduring of the European sex goddesses—even if at heart she’s more Madonna than dolce vita"

The Italian director Lina Wertmüller shared this observation: "There was always in Sophia a wonderful actress. But the exaggeration of her beauty worked against her. If someone is not so beautiful, it makes it easier to see that she is good. Beauty is the enemy of an actress"

Wertmüller also posed this comparative question: "There is Garbo, Dietrich, Monroe—and Sophia. Who else inspires the whole range of feminine charms, from sex to motherhood? Who does not dream of falling asleep in a magical moment on Sophia’s breast?"

The journalist, Pete Hamill, recognised a rare quality: "Her nose is too large, her chin too small Her feet are the biggest of any movie queen since Greta Garbo. But head her in the direction of a camera, set her Etruscan eyes dancing, and Sophia is one of the most magnificent women in the world" 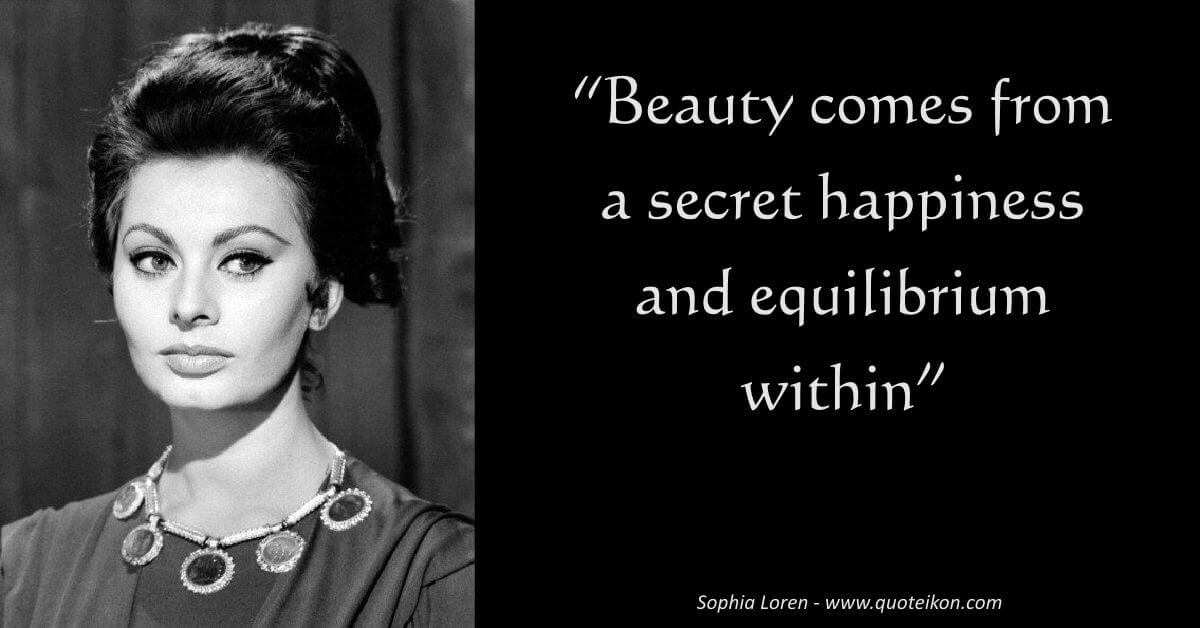