Diana Dors was the buxom blonde bombshell who stepped into the Rank Organisation studios as a sixteen year old teenager and strutted out as a sexy siren of the silver screen. She had the looks of a screen goddess complete with the voluptuous figure combined with the bleached blonde locks, wanton eyes topped with fluttering spider eyelashes and the husky breathless voice of a teenage temptress.

From her screen debut in 1947 she appeared in 11 movies before the turn of the decade, starting with bit parts Dors gradually progressed to be a leading lady and it seemed a glittering career was beckoning.

Diana had received excellent training at the London Academy of Music and Dramatic Art, all she lacked was the scripts to carry her talent to the next level, however getting good scripts did not appear to be on the agenda of any studio she worked for. She showed promise in the comedies "My Wife's Lodger" (1952) and "Is Your Honeymoon Really Necessary?" (1954) and when she changed track to drama Diana excelled in the 1954 film "The Weak And The Wicked".

It was clear the potential was there but then Marilyn Monroe wowed the world with her role in "Gentlemen Prefer Blondes" in 1953 and from that moment on Diana Dors was labelled as the British Marilyn Monroe. As blonde bombshells go neither were the original as that title went to Jean Harlow in the 1931 movie "Platinum Blonde", but even though Diana pre-dated Marilyn as a peroxide blonde she spent the rest of the decade walking in the shadow of the Hollywood starlet.

Although Diana could not compete with Monroe's looks on screen she was far sharper and wittier than the screen legend and in May 1956 she signed a contract with RKO. In August of the same year a party was arranged for her to meet the press and a star studded line up of Hollywood's elite also attended. All was going well until a surge from the paparazzi pushed Diana, her husband Dennis Hamilton and two others into the pool, things then got ugly. Instead of emerging from the pool with some dignity and laughing it off Hamilton flew into a rage and beat up one of the photographers knocking him unconscious. The press had a field day and the Hollywood elite were not impressed, making it in Hollywood is extremely difficult at the best of times and in the long run this sorry episode was to cost Diana.

Filmed for RKO in 1956 but released in 1958 she was the leading lady in "I Married A Woman" starring alongside George Gobel who called her "a fine performer". In 1957 Diana starred opposite Rod Steiger in "The Unholy Wife" but the movie was unsuccessful at the box office, RKO had enough and terminated her contract giving her no choice but to sue, she won the case but agreed a reduced payout of $200,000 USD.

Hamilton was not just her husband he was also her manager who looked after everything, including the money. He looked upon Diana Dors as a 1950's equivalent of a lottery win and he showered her with bad advice in order to gain a quick buck at the expense of her career. It was Hamilton who guided her into an endless list of B movie scripts because he saw light entertainment as where the money was and turned down any good dramatic offerings. He was also both violent and abusive towards Diana and he thought nothing of placing her on a producers casting couch in order to secure her a role. Then there were his many affairs and the sex parties he introduced her to, eventually Diana left him and filed for divorce but Hamilton died from syphilis before the divorce proceedings were complete.

Diana remarried and toiled with movies throughout the sixties but seemed typecast as the dumb blonde or the harlot in supporting roles so she had to reinvent herself in cabaret, theatre and eventually television. With her ability to bounce back she showed a steely resolve and revealed a pragmatic nature that when combined with her sassy intellect created a personality in demand from television and loved by the tabloids.

Always glamourous Diana Dors typified being cast for her curvaceous nature rather than her human nature but in real life she was sassier, saucier and creatively smarter than any script she was ever given, just as her life was as complex as it was candid her talent was as misunderstood as her career was mishandled. It is a great credit to Diana that she bounced back after every setback and her legacy is more of a charming British cultural icon than that of a blonde bombshell forever in the shadow of a certain Ms Monroe. Off screen her mischievous wit made for some fascinating headlines that helped me to create this compilation of 20 of the best Diana Dors quotes.

The English critic Lynda Lee-Potter described her thus: "She was part of our culture as much as the monarchy, fish 'n chips, or Land of Hope and Glory"

The critic David Thomson gave this assessment: "Dors represented that period between the end of the war and the coming of Lady Chatterley in paperback, a time when sexuality was naughty, repressed and fit to burst"

The film historian Sue Harper once described her as: "A sort of Lady Docker of the screen" 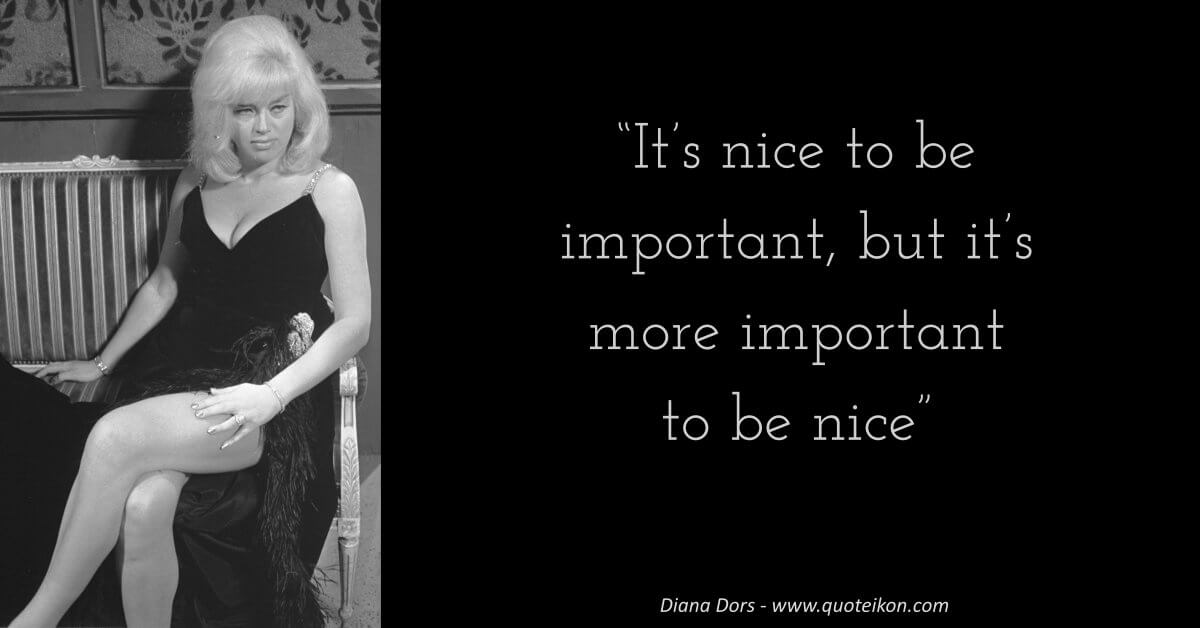