The blonde bombshell look of Monroe and Mansfield may have dominated 1950's cinema but Raquel Welch soon ripped up the peroxide play-book when she donned that doeskin bikini. The scantily clad image of Raquel standing atop a Canary island volcano propelled her to worldwide fame and became one of the best selling posters of the 1960's.

The movie One Million Years B.C. was not only her ticket to success, but also her gilded cage. Raquel was typecast as a sex symbol. This ultimately deprived her of the more technical acting roles she so dearly craved.

The big question is how far could she have pushed her talent if given the opportunity? I am sure she would have risen well beyond the imagination of pessimistic producers petrified to look beyond the pigeonhole of pulchritude. Alas, Hollywood budgets like the safety of typecast certainty that can be milked until dollar dry.

The actor turned critic Rex Reed shared this interesting comparison: "Raquel is a very complex girl. She is terribly, terribly interested in being taken seriously. She has elected to be a movie star, but underneath that creamy skin and those bulging blouses beats a Puritan heart. She is a Jane Austen heroine, and the conflict has made her uptight"

Playboy owner Hugh Hefner was impressed to say: "Raquel Welch, one of the last of the classic sex symbols, came from the era when you could be considered the sexiest woman in the world without taking your clothes off. She declined to do complete nudity, and I yielded gracefully. The pictures prove her point"

Heffner also added: "She was the single woman that I most wanted to have in the magazine. She seems to be ageless. Good genes, health food -- I'm not sure what it is, but it's magic"

Movie producer Robert Fryer pondered this age old dilemma: "If a man were going to become a woman, he would want to become the most beautiful woman in the world. He would become Raquel Welch"

The writer David Giammarco was impressed to say: "There's simply no mistaking that the bombshell gods broke the mold after they created Raquel Welch"

The Hollywood agent, Noel Marshall, mused on the fickleness of changing attitudes: "The domestic market for films has dropped into the 40 percentile of the gross market. The world wanted an international symbol—a brunette or an auburn-haired girl like Raquel rather than the Monroe type"

The New York Times critic Frank Rich was wowed by her first performance in the musical Woman of the Year: "We’ve never heard wolf whistles like that before on the Great White Way!"

The critic Glenne Currie was less than sympathetic towards Ms Welch stepping up to the Broadway role previously filled by Ms Bacall: "We lost the ERA, Lena Horne and Lauren Bacall all on the same day, and what did we get instead? We got Raquel Welch; that's what we got. Sometimes life is not fair"

A Professor of Palaeobiology, Jan Zalasiewicz, reminisced about One Million Years B.C.: "Raquel Welch is there, compiling the local soroptimist membership list and pretending that a fur bikini isn't even the teensiest bit naughty"

Burt Reynolds on first laying eyes on Raquel Welch: "I remember Raquel's effect on the American psyche when she walked across the stage on 'The Hollywood Palace' with a card in her hands, it was staggering. When she came on stage, I mean, you didn't look at anybody else"

Her former dance teacher, Irene Clark, summed her up thus: "There was no humility in her approach to art. She enjoyed attention too much, and she knew how to get it"

In the run up to the 1968 movie The Biggest Bundle of Them All, co-star Edward G. Robinson shared this pre-assessment: "I must say she has quite a body. She has been the product of a good publicity campaign. I hope she lives up to it because a body will only take you so far"

Owen McLean, who was the Fox Talent Director in the 1960's, was surprised by her rapidity up the slippery pole of fame: "We thought we would build her up slowly; that it would take some time. But she got more publicity by accident than most girls get on purpose"

The critic Camille Paglia described her appearance in One Million Years B.C. as: "the indelible image of a woman as queen of nature. She was a lioness: fierce, passionate and dangerously physical"

Don Diego, who ran the Californian Fairest of the Fair Festival, remembered her well: "There were prettier girls around, but none had her figure or her drive. Most girls tremble before they go onstage. Raquel never did. You could tell by the way she got up there that she was the queen" 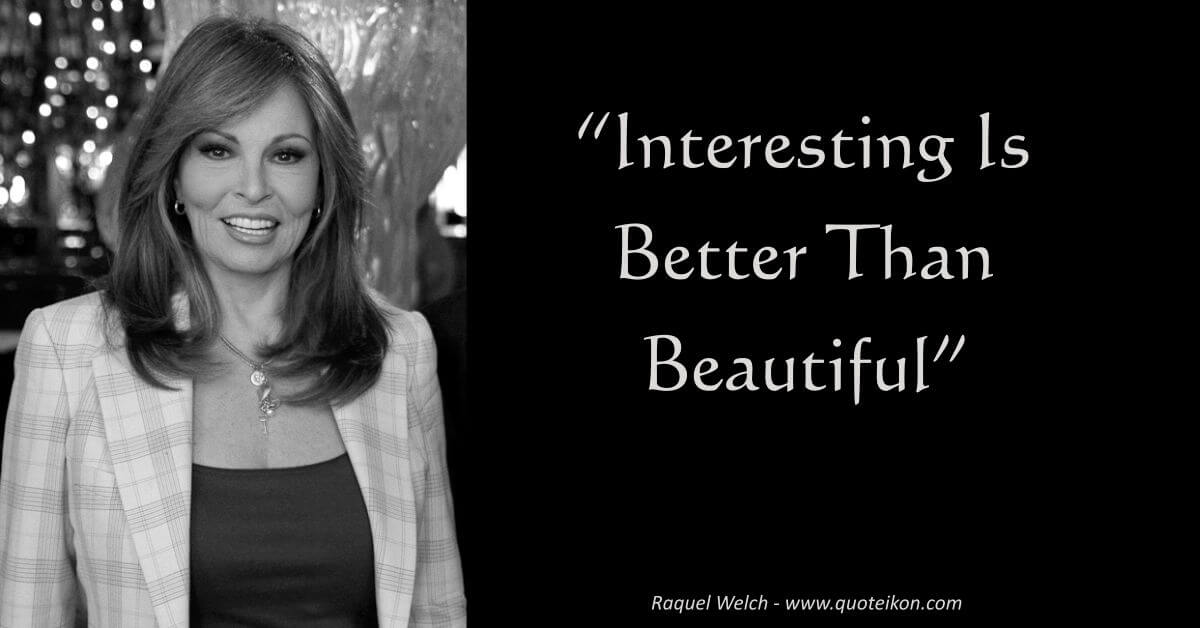