Paul Cézanne was another in a long line of tormented artists brave enough to defy the conventions of the established Salons of Paris yet filled with the self doubt of an artistic pioneer questioning at every turn his work as it evolved and placed him at the forefront of the post-impressionist movement.

Cézanne was persistent in his vain attempts to display his paintings at the exhibitions of the official Paris Salon as he participated in a futile pursuit between the years of 1863 up to 1882 with jurors of the Salon more often than not denying him permission for his work to be shown.

Paul Cézanne treasured Parisian Salon fame far more than Paris appreciated his work so the artist turned to the Impressionists exhibitions in 1874 and 1877 only to find his works ridiculed and attacked by critics. Feeling hurt and somewhat perplexed by a lack of artistic vision in the eye of his critics he decided to continue his painting for a time without looking for the recognition he felt he deserved.

Withdrawing from the Parisian spotlight Paul Cezanne took inspiration from the countryside surrounding his native Provence where he was brought up and enjoyed his school boy days with the distinguished French novelist Émile Zola with whom he enjoyed a close friendship until Zola's 1886 publication of his novel "L'œuvre". The novel depicted the bohemian Paris art world during the 19th-century but with an incisive twist as the main character Claude Lantier mirrored the life of Paul Cézanne, the artist felt betrayed and humiliated to the point he never forgave Zola for this most severe personal indiscretion.

During the same decade Cezanne's father, who was a banker, passed away and left the artist a small fortune that meant he could further pursue his artistic dream without the troublesome worries of thinking how to pay the rent or buy food.

In 1895 his luck changed as the art dealer Ambroise Vollard exhibited 150 of his paintings in Paris whereby his brush strokes were to be finally appreciated. In the ensuing years he gained more recognition and inspired a growing number of artists who recognised the transformational period Cezanne had been instrumental in encouraging. This later got termed post-impressionism as Cezanne had broken the bonds of limitation imposed by the Impressionist period with his use of vivid colours to gradually distort form as he got to grips with the essence of his artistic nature by visualising and capturing the moment in all its glory.

Paul Cézanne earned the nickname "The Father Of Modern Art" with a host of influential artists like Pablo Picasso, Pierre-Auguste Renoir, Paul Gauguin and Vincent Van Gogh all citing him as a source of inspiration. Although not fully appreciated during his lifetime he has been a resounding success posthumously with one of his art works "The Card Players" selling in 2011 for in excess of $250 million dollars as the State Of Qatar swept in to own his masterpiece.

He was more at home in front of the easel rather than holding court for a crowd, but this did not stop making a number of memorable quips, so this is my compilation of 20 of the best Paul Cézanne quotes.

Pablo Picasso described what made the artist: "It is not what the artist does that counts. But what he is. Cézanne would never have interested me if he had lived and thought like Jaques-Emile Blanche, even if the apple he had painted had been ten times more beautiful. What interests us is the anxiety of Cézanne, the teaching of Cézanne, the anguish of Van Gogh, in short the inner drama of the man. The rest is false"

American artist Marsden Hartley paid tribute to the great man by saying: "No one will ever paint like Cezanne, because no one will ever have his peculiar visual gifts"

Fellow artist Paul Gauguin said this of his peer: "This Cézanne (Still life with Compotier, Fruit and Glass), that you ask me for is a pearl of exceptional quality and I already have refused three hundred francs for it; it is one of my most treasured possessions, and except in absolute necessity, I would give up my last shirt before the picture"

Painter Pierre-Auguste Renoir spoke so highly of him: "How does he Cézanne do it? He cannot put two touches of colour on a canvas without it being very good"

Claude Monet was quoted as saying in 1894 that Cézanne was a far better painter who deserved so much more: "How sad it is that this man hasn't had more patronage in his life! This is a true artist who has come to doubt himself far too much"

His friend and writer Émile Zola wrote in a letter to Cézanne: "There are two men inside the artist, the poet and the craftsman. One is born a poet. One becomes a craftsman" 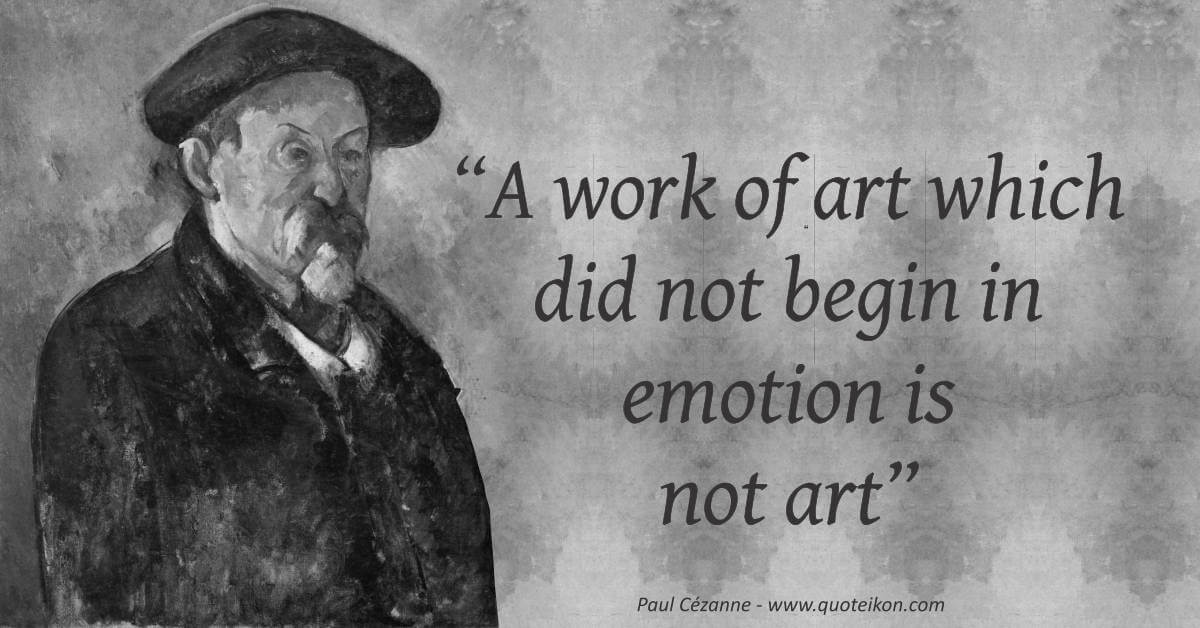