Most revolutions target a country. Some a whole continent. The bondage of slavery to the Spanish crown had cast a dark shadow over most of South America for three centuries. One man sensed it was time for change. He is Venezuela's most famous son who earned the honorific title El Libertador. His name is Simón Bolívar, the revered revolutionary who inspired a continent to rise up and fight for their liberty.

Simón Bolívar is often held in the same comparative esteem as George Washington. Both men were deemed indispensable to achieving a successful revolution. Both were charismatic figures who held their own on the field of battle. They were both blessed with the cohesive qualities of character that held their respective revolutions together during their darkest hours.

Bolivar's achievements are the stuff of legends. He accomplished the abolition of slavery nearly half a century before Abraham Lincoln emancipated the servitude of slavery in the southern states of the U.S. His armies crossed more mountainous peaks than the forces of Hannibal and Alexander The Great combined. In the fight for freedom he suffered many defeats, but he bounced back every time.

His was a revolution that changed the course of South American history. But it was fate and tragic circumstances that steered Bolivar down the path of independence and liberty.

Simon Bolivar came from a wealthy land owning and military family. He received a coveted education in Europe where at the age of 19 he met his wife to be María Teresa Rodríguez.

Once married, they returned to South America and set up home in Caracas. But after just eight months of marriage Simon was devastated when María succumbed to yellow fever and died. Bolivar vowed to never marry again and he kept his word. Married at 18 and a widower at 19 he was depressed and left for Europe to find a purpose for his life.

Bolivar met with geographer Alexander Von Humboldt who informed him that South America was ripe for revolution. All it lacked was a leader. Simon also had meetings with his former educator and mentor Simon Carreno who had already instilled the merits of liberty, enlightenment, and freedom in his mind. The discussions with his former tutor gave Bolivar the focus he needed to decide he would fight for the independence of his homeland.

It was while with Carreno on Palatine Hill in ancient Rome that Simon Bolivar swore an oath of commitment: "On my honour, I will never find rest until the Spanish chains are broken in Venezuela". He meant every word. Bolivar returned to South America with renewed vigour and a determination to win the struggle for independence from the Spanish colonialists.

Simon had studied the history of both the American and French revolutions with great interest. He was in Europe in 1805 to witness Napoleon Bonaparte crowned as the King of Italy. The charisma surrounding the rise of Napoleon fascinated and enthralled Bolivar. He immersed himself in the ideology of European enlightenment thinkers including Jean-Jacques Rousseau and Voltaire.

By 1807 Bolivar was back in South America. He carried a determination to succeed and his eloquent tongue opened many eyes and minds to the possibilities of a successful independence movement.

Not being a hasty hair trigger rebel Simon bided his time. In 1808 an opportunity arose that was too good to ignore. Napoleon had invaded Spain and deposed the king of Spain Ferdinand VII.

The time was ripe. The Spanish colonies responded by declaring France an enemy and formed their owned juntas (elected councils). Bolivar was committed to the cause of independence and liberty. The South American wars of independence that followed would be a bitter struggle that would rage on for years.

In 1810 a coup in Caracas led by Bolivar and Francisco de Miranda led to a junta independent of Spanish rule. This was the start of the Venezuelan Wars of Independence that set the royalists still loyal to Spain against the First Republic of Venezuela.

Caracas was back in Spanish hands by 1812. This was just one of many set-backs on the road to full independence. But it did expose one of the harsh realities of independence, combatting the beast of economics.

The republics main source of income was cocoa. But with the Spanish market no longer accessible this left a hole in the purse of the public that was a cause of discontent. Then the devastation of an earthquake on 12th March 1812 was the final straw. Spanish innuendo suggested it was divine retribution and the gullible ones capitulated to their former oppressors.

Miranda saw no other option than to negotiate a peace treaty with the Spanish. Bolivar and his fellow revolutionaries saw this as treason, he wanted to shoot Miranda but his comrades convinced him not to. Instead they had Miranda arrested and arranged his transit to the Spanish. Miranda's fate would be to die in a royalist prison.

One year later Bolivar would retake Caracas. He took control of Trujillo and Mérida too, but this was again short lived. In 1814 the Second Republic of Venezuela was again ousted by the royalist forces. It was a dirty war of blood and attrition. Bolivar was compelled to issue the Decree of War to the Death which encouraged murder and atrocities against any Spanish born people that did not support South American independence.

Bolivar was forced into exile. Initially to Jamaica where he wrote his political manifesto the Carta de Jamaica which was essentially a plea for help to the British empire.

His next stop was Haiti. Bolivar befriended Alexandre Sabès Pétion who was the first President of the Republic of Haiti. Petion armed Bolivar by providing ships, weapons and soldiers, on one condition, to promise to free all slaves in South America. Simon agreed. This would be the catalyst that would end the tyrannical rule of Spanish imperialism once and for all.

The Venezuelan campaigns that started in 1816 were a bloody battle. It was a high stakes fight to death or glory. Bolivar's forces captured New Grada and Angostura. These were the seeds of the Third Republic of Venezuela.

The Bolivar gaze was next set on liberating New Granada. By now, Simon was a veteran of crossing armies over the Andes mountains. This led to the decisive Battle of Boyacá on 7th August 1819 where the royalist forces were routed by Bolivar's ally Brigadier General Francisco de Paula Santander.

Further hard earned victories saw the independence movement take Junín and Ayacucho in Peru, Pichincha in Ecuador and Carabobo back in Venezuela.

The huge territory of Gran Colombia was taking shape. The biggest battle would be to keep it together as a confederation of Latin American states.

Bolivar was a brilliant battle field tactician and military leader. He did not lack the nous of the savvy politician. It was the in-fighting between local warlords who were power hungry to grab their piece of the action that would see a union of states to rival Washington's in North America fail.

Today Simon Bolivar is regarded as a South American hero who managed to wrestle control of an area equivalent in size to Europe from a then world super power, Spain.

To get an idea of the size of the geographical area he liberated you just have to look at the modern day countries of Bolivia, Panama, Colombia, Ecuador, Peru, Guyana and Venezuela. As you can imagine to achieve this was staggeringly extraordinary.

In 1826 whilst in Lima, Simon wrote the Bolivian Constitution which introduced a fourfold separation of the presidency, the judiciary, the congress and the electoral body.

In the fight for independence, Simón Bolívar actively fought on the field in more than 100 battles and survived many assassination attempts. But somewhat surprisingly, he was never on the receiving end of any significant wounds. It is like liberating much of South America was the destiny he was fated to fulfill.

Bolivar was the first president of Gran Colombia where he held the reins of power from 24th February 1819 until just before his death in 1830. Due to ideological and political differences Gran Colombia broke up into separate successor states one year after his passing.

All great men receive great recognition. The U.S. named their capital city after George Washington. Simon Bolivar went one step further when Bolivia named their country after him. This act made him one of the few men in history to achieve such an honourable distinction.

History recognises Bolivar as one of the bravest and most successful revolutionaries of all time. As a soldier, revolutionary and a statesman his actions carried such an impactful influence that he is forever remembered in the hearts and minds of all South Americans.

His lettered tongue meant he was never short of an inspired word or two, so this is my compilation of 22 of the best Simon Bolivar quotes.

Haitian president Alexander Petion who twice armed Bolivar said this of him: "You failed, it happens in life to the better men. Something tells me that this time around you will succeed"

Guyana politician Odeen Ishmael said of him: "He deserves glory for being a visionary and for taking the decisive giant step to win and influence political independence for so many nations in South America"

The 45th Venezuelan President Hugo Chavez was quoted as saying about him: "I'm far from comparing myself with our father Bolivar. I'm a microscopic soldier next to the giant"

Francisco de Paula Santander summed him up thus: "When Calhoun was talking about Bolívar, he asked me if he had a passion for money. I answered no, because his two dominant passions were: glory and power"

Francisco de Paula Santander went on to say: "Bolívar was vindictive and proud"

The 46th Venezuelan President Nicolas Maduro still held the passion of Simon Bolivar: "We, Bolivarians, continue with the libertarian ideal lit in our hearts in defence of the homeland"

On 15th August 2019 the 80th President of Bolivia Evo Morales was quoted as saying: "As today, 1805, the liberating brother Simón Bolívar went up to Monte Sacro in Rome and swore before God, his teacher Simón Rodríguez and for the honor of his family and country, fight tirelessly until freeing us from the Spanish yoke. We honor his memory and defend his legacy of sovereignty"

Evo Morales went on to say: "We remember the birth of Simon Bolivar, the Liberator, builder of the Great Homeland, father of six nations and our first president"

The author Marie Arana shared this assessment: "Few heroes in history have been dealt so much honor, so much power - and so much ingratitude" 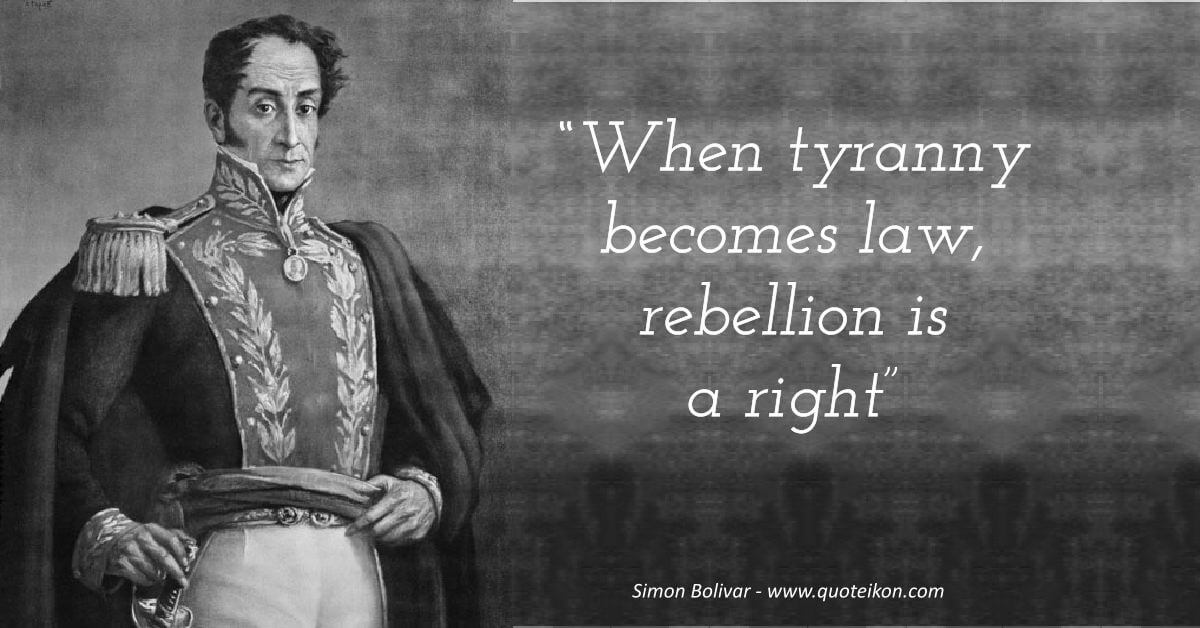 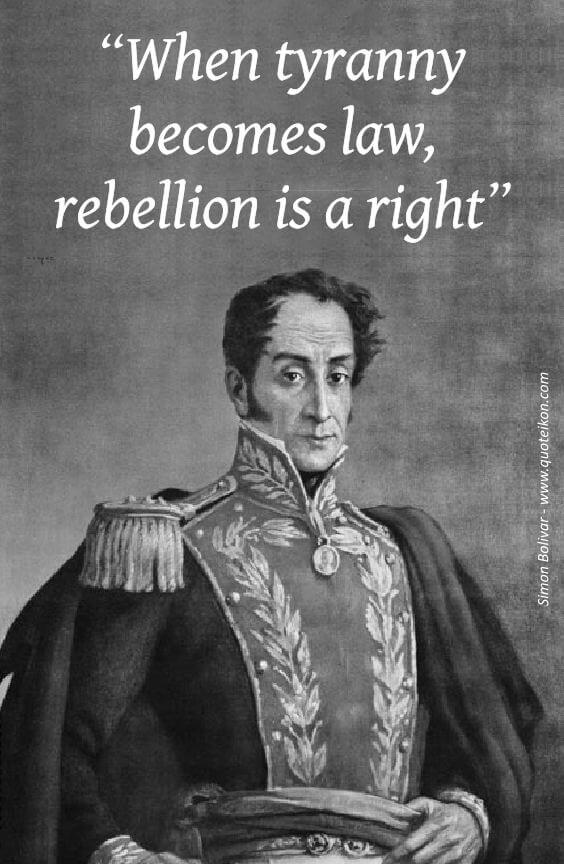