Tony Curtis was the boy from the Bronx with the film star looks and the determination to put them to good use on the silver screen in true Hollywood style.

After serving in the U.S. navy during WWII he discovered that post war under the GI bill he could get the cost of acting classes covered so his dream of becoming an actor started to take shape. An agent then discovered him and arranged an interview with Universal and the studio offered him a seven year contract.

Straight away Tony was getting noticed by both the girls and the producers with intimate liaisons with the likes of Marilyn Monroe and Natalie Wood (to name but two) and producers giving him more and more better roles as his fan mail increased.

In 1951 he married the Hollywood actress Janet Leigh which led to him co-starring with her in his first hit movie Houdini in 1953.

As his roles improved so did the acceptance of Hollywood's elite culminating in his only Academy Award nomination for the 1958 movie "The Defiant Ones", where although he did not achieve his dream of winning an Oscar he gained a lot of respect for insisting his fellow co-star Sidney Poitier received equal billing to him which was previously unheard of for an actor of colour.

Curtis was a fashion leader also with Elvis Presley modelling his famous hairstyle on "the Curtis Quiff" that Tony donned in "The Defiant Ones". In the 1959 Billy Wilder comedy "Some Like It Hot" he excelled which later prompted Michael Parkinson to be quoted as saying of him: "Billy Wilder, did not suffer fools so for Tony Curtis to work with him and make that film shows just how good he was".

For years after starring with Marilyn Monroe in "Some Like It Hot" a quote about kissing Marilyn "was like kissing Hitler" has been doing the rounds until Tony finally debunked this as nonsense in a Guardian newspaper interview when he explained someone asked him a dumb question: "Hey, what's it like kissing Marilyn?" I said, "It's like kissing Hitler. What are you doing asking me such a stupid question?" That's where it came from. But those bums who try to make up something that they don't have by watching movies, turned it into nonsense. It's all nonsense"

In later years he took great comfort from his painting at which he also excelled and much preferred to acting on screen. Sharp talking actors are always great for a quality quip so here is my compilation of 20 of the best Tony Curtis quotes

Debbie Reynolds summed him up thus: "Tony had that kind of talent that he could do comedy and tragedy as equally as important. He loved painting, he loved music. Tony loved life, he loved beautiful women, he had a wonderful time"

Debbie Reynolds went on to speak of his meeting Janet Leigh: "Tony was a big, macho, Rambo-type guy; stunning, with gorgeous blue eyes and an ego on steroids. But he took one look at her and it was like the Fourth of July tripled. Janet had the world trying to get her, but Tony wanted her and she didn't have a prayer. It was physical; it was sexual. It was like dynamite. He got her and he married her"

Elvis Presley admitted to Tony he was a fan: "Mr Curtis, I want you to know what a fan I am. I used to watch your movies in Tennessee"

Laurence Olivier shared this advice with Tony: "If you want to play a character on the screen, dress it first. Dress yourself up as you think this guy would look like. You'll find it so much easier to do"

Cary Grant signed a photo and wished him luck: "To Tony, Welcome on the trolleycar named Desire and Success. I'm sure your trip will be long and enduring" 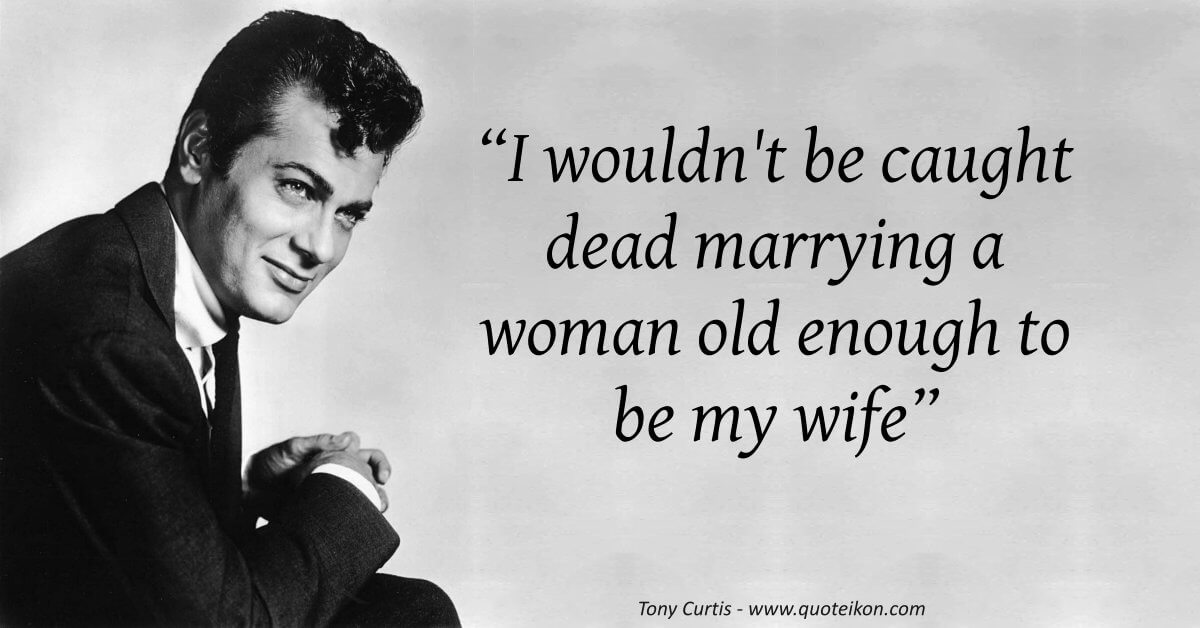