Lana Turner was the Hollywood beauty whose career was the toast of the tabloids as she divorced her way through seven husbands, roused a swarm of romantic romeo's and saw her daughter stab her mobster lover to death because he was beating her. There was never a dull moment in the half century of fame Hollywood bestowed on the Idahoan born beauty, and she even made time for some memorable movie moments also.

When Lana was six years old her family uprooted and moved to California where jobs were supposedly plentiful, but instead of finding a regular paycheck her father was found bludgeoned to death in a street robbery gone too far in December 1930. This had a devastating impact on the then eight year old Lana who was forced to come to terms with the unsolved murder without closure and long before the days of grief counselling.

Her mother worked long hours to keep a roof over their head's and give a semblance of normality to an upbringing devastated by her fathers death. As she grew up Lana was determined to help her mother and whether her discovery as a prospective actress was luck or fortuitous it was an unexpected break that was to change her life forever.

The discovery of Lana Turner is the epitome of the American dream as she skipped a school lesson and just happened to be nonchalantly sipping coca-cola in the Top Hat Cafe on Sunset Boulevard when William Wilkerson, who was the publisher of the Hollywood Reporter magazine, just happened to be walking by and was taken aback by the beauty of the then 17 year old school girl. He asked her if she was interested in being in movies, to which Lana Turner was quoted as replying: "I don't know, I'll have to ask my mother". Her mother granted permission and Wilkerson introduced her to the agent Zeppo Marx who got her a screen test with the filmmaker Mervyn LeRoy who was impressed and cast her in her first role in the 1937 movie "They Won't Forget". In her debut performance Lana had a non speaking role and was quickly murdered but her screen presence made an impact which LeRoy noted and when he crossed over from Warner Brothers to MGM he offered Turner a contract which she happily signed.

Her first movie at MGM was "Love Finds Andy Hardy" (1938) and the head of the studio Louis B. Mayer was impressed to think he may have signed the next Jean Harlow

In the 17 years she spent at MGM Turner made 36 movies including these memorable films: "Ziegfeld Girl" (1941) alongside James Stewart and Judy Garland, "Dr. Jekyll and Mr. Hyde" (1941) opposite Spencer Tracy and Ingrid Bergman, "Somewhere I'll Find You" (1942) with Clark Gable and The Sea Chase (1955) a WW2 adventure film co-starring John Wayne. Her strongest dramatic performances were in the 1946 movie "The Postman Always Rings Twice" which co-starred John Garfield and her Academy Award nominated performance in "Peyton Place" (1957) where she lost out on the best actress award to Joanne Woodward in "The Three Faces of Eve".

By the mid 1960's her big screen career was slowing so Lana turned to television in the ABC production of "The Survivors" in 1969 and her notable performance as Jacqueline Perrault in "Falcon Crest" in the early 1980's.

In her personal life her many marriages and affairs made the headlines but her notoriety rose past the Hollywood scandal scale with the 1958 homicide of her lover Johnny Stompanato. He was part of the Mickey Cohen Los Angeles mob and Stompanato was quick with his fists even with his lovers. On that fateful night Turner and Stompanato had a raging argument and her 14-year-old daughter Cheryl Crane was fearful for her mothers life so she took a knife from the kitchen and as Stompanato emerged from the bedroom, still fighting with Turner, Cheryl stabbed him in the torso. Both a doctor and emergency services were called but he never made it, after a thorough investigation the authorities deemed it as justifiable homicide and Cheryl Crane walked.

Lana Turner was the archetypal glamour queen from the golden days of Hollywood, on screen and off she lived up to her seductress reputation as she left men enchanted in her wake and fascinated the ladies in equal measure. She spoke some epic lines in her movies and she was equally as sharp with her real life words, some of which I have compiled in this list of 21 of the best Lana Turner quotes.

Billie Holiday shared this anecdote: "Lana Turner used to come in every Tuesday and Thursday. That girl can really dance, and she did at Billy's. She always asked me for "Strange Fruit" and "Gloomy Sunday." She used to like to dance with young Mel Tormé, who used to win all of Billy's lindy contests"

The filmmaker Mervyn LeRoy spoke of her first screen test: "Her hair was dark, messy, uncombed. Her hands were trembling so she could barely read the script. But she had that sexy clean quality I wanted. There was something smoldering underneath that innocent face"

The author Lou Valentino described her thus: "Never quite the lady, but never cheap; warm and friendly but unattainable; she held a fascination for both men and women"

Milton Berle paid her a fine tribute: "She was not just beautiful in form, she was beautiful in heart. I think that we lost a very valuable personality, and it's a shame because her beauty just seeped off the screen"

The critic Anita Loos shared this observation: "Lana Turner typifies modern allure. She is the vamp of today as Theda Bara was of yesterday. However, she doesn't look like a vamp. She is far more deadly because she lets her audience relax"

The columnist Louella Parsons gave this early verdict on her acting prowess: "If Lana Turner will behave herself and not go completely berserk she is headed for a top spot in motion pictures. She is the most glamorous actress since Jean Harlow"

The critic Dorothy Kilgallen gave this comparison in 1946: "Lana Turner is a super-star for many reasons but chiefly because she is the same off-screen as she is on. Some of the stars are magnetic dazzlers on celluloid and ordinary, practical, polo-coated little things in private life. Not so Lana. No one who adored her in movies would be disappointed to meet her in the flesh. The flesh is the same"

The film historian Jeanine Basinger was impressed to write of her performance in "The Bad and the Beautiful": "None of the sex symbols who have been touted as actresses - not Hayworth or Gardner or Taylor or Monroe - have ever given such a fine performance" 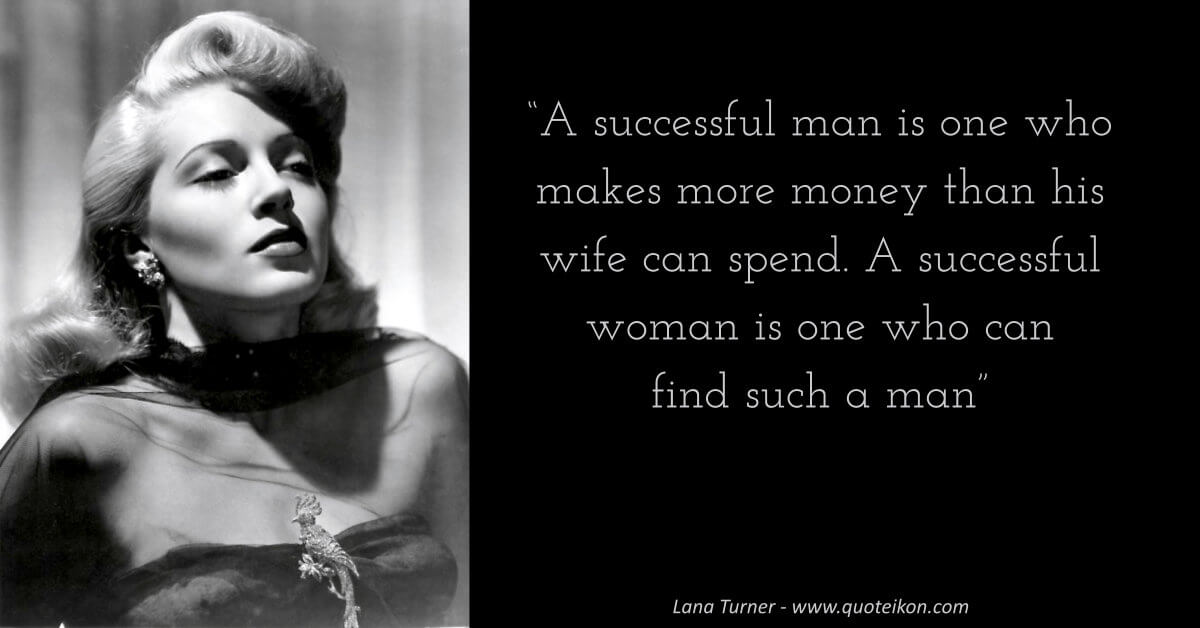