Ingrid Bergman was the Swedish actress whose Nordic good looks radiated with her magnetic on screen presence as she enchanted audiences with her natural talent and graceful performances that saw her versatility on screen rewarded with seven Academy Award nominations of which she took home the coveted Oscar on three occasions.

From her childhood Bergman longed to be in front of her photographer father's camera, she lost her mother at 3 years old and after her father died when Ingrid was just 13 she was left orphaned but with a legacy that pined to stare into the camera as if she were peering into her daddies soul. She left drama school early to take a small role in the Swedish comedy Munkbrogreven (1935) and the following year she starred in Intermezzo (1936) which was a movie the producer David O. Selznick later decided he wanted to shoot in Hollywood together with its female lead Bergman.

She made her name with a stunning performance in Selznick's Intermezzo: A Love Story (1939) to which the Film historian David Thomson enthused by saying it was: "the start of an astonishing impact on Hollywood and America". Bergman's lack of make up seemed to enhance her natural beauty in the low key lighting of the black and white era as she shimmered from shadow to light with an air of suspenseful expectancy that gripped cinema goers.

Her next big movie was not just big, it turned out to be the all time classic Casablanca (1942) where she shared the screen with Humphrey Bogart, Paul Henreid, Sydney Greenstreet and Peter Lorre in a movie that was an initial commercial success and as the decades passed it grew in popularity whereby it is now regularly voted as one of the all time greatest movies.

The 1940's were a busy period for Miss Bergman as she received four Academy Award nominations for best actress in For Whom The Bell Tolls (1943), Gaslight (1944), The Bells of St. Mary's (1945), and Joan of Arc (1948). Of the four nominations it was only for Gaslight that she received what was to be her first Oscar, her two other notable movies of the decade were the Alfred Hitchcock thrillers Spellbound (1945) and Notorious (1946) that were both critically acclaimed.

While the 1940's were kind to he career the next decade started off with Ingrid Bergman at the centre of one of the biggest scandals ever to hit Hollywood when she admitted to having an affair with the Italian film director Roberto Rossellini while they were both still married to their respective partners. They started the affair during the filming of Stromboli (1950) and when Bergman announced she was pregnant with his child the story exploded with sensational headlines damning the couple who were even admonished in the U.S. senate with some calling for a ban on her movies.

Bergman and Rossellini both obtained divorces and they were married in May 1950 and went on to have three children together. Bergman made six movies with Rosselini and although none were great commercial successes Stromboli is considered a classic movie of Italian neorealism. The couple separated in 1956 which was also a year that Bergman announced her return as a Hollywood studio star in the movie Anastasia that was an historical drama shot in France and rewarded the Swedish actress with her second Academy Award for best actress that paved the way for her triumphant return to the U.S.

Miss Bergman continued to star in movies and on the television right up to her death from cancer in 1982. There were many highlights and headlines including picking up her third Oscar, this time for best supporting actress for her role in Murder On The Orient Express in 1974.

Ingrid Bergman had an uncanny knack of choosing scripts where her versatility as an actress could be tested and she was never found wanting. She pushed boundaries both on and off screen and had the tenacity to face down the moralists and come back stronger than ever with the critics who were once scathing now praising the sheer vitality of her calm but assured poise as an actress.

On stage or in the studio Ingrid Bergman was the ultimate professional who adored the camera for which she could pose with a smile and warmth that could unfreeze the darkened soul of a lawyer as she smouldered her way to become an icon of the golden era of Hollywood. She was never afraid to speak her own mind which gave me food for thought to create this compilation of 20 of the best Ingrid Bergman quotes.

Humphrey Bogart was impressed to say: "I didn't do anything I've never done before, but when the camera moves in on that Bergman face, and she's saying she loves you, it would make anybody feel romantic"

Ernest Hemingway was forthright in his pursuit to get her to act in the film version of his novel "For Whom The Bell Tolls" when he said: "If you don't act in the picture, Ingrid, I won't work on it"

Her daughter Isabella Rosselina made this admission: "I didn't want to become an actress because the competition with my mother would have been to much to live up to"

The producer David O. Selznick gave this assessment: "She had an extraordinary quality of purity and nobility and a definite star personality that is very rare"

The actor Cary Grant spoke of her box office draw: "There are only seven movie stars in the world whose name alone will induce American bankers to lend money for movie productions, and the only woman on the list is Ingrid Bergman"

The Cannes film festival secretary Christiane Guespin shared this observation: "Every night, when she arrived at the evening screenings, people would stand and give her an ovation and applause. Every single night. I have never seen that happen for anyone else"

Her Casablanca co-star Paul Henried described her thus: "I don’t think she was taken by her beauty. She was taken only by the desire to do the best work possible in her profession"

The actor Anthony Quinn shared this anecdote: "Sometimes in motion pictures you love someone so much, but it doesn't work on the screen. And you don't like somebody and you're wonderful on the screen. The two greatest talents I worked with were Ingrid and Anna Magnani. But I would prefer to work with Magnani, whom I didn't like, than Ingrid, whom I loved"

The critic Wanda Hale summed her up thus: "She has a combination of rare beauty, freshness, vitality and ability that is as uncommon as a century plant in bloom"

Film historian David Thomson talked of her Hollywood heyday: "There was a time in the early and mid-1940s when Bergman commanded a kind of love in America that has been hardly ever matched. In turn, it was the strength of that affection that animated the "scandal" when she behaved like an impetuous and ambitious actress instead of a saint" 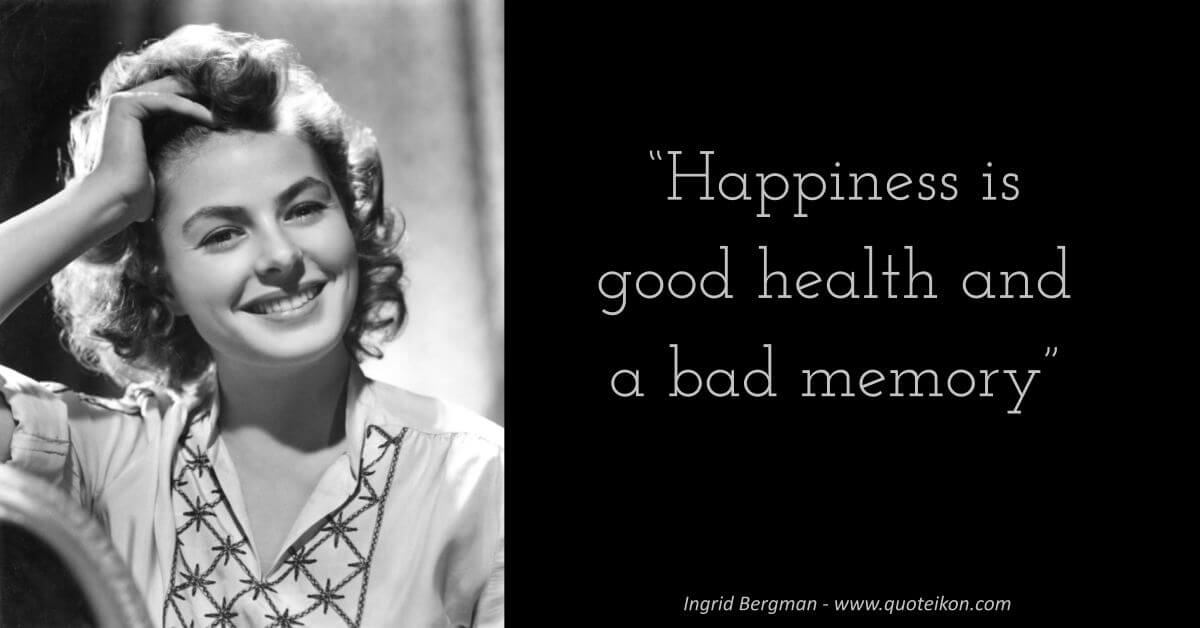