Every generation seems to produce soulful singers with silken voices that harmonise the sultry tones of musical enchantment. When the music producer John Hammond walked out of that Harlem speakeasy in 1933 he knew he had discovered a once in a generation songful talent that had the potential to impact the jazz scene for decades to come. That singer was Billie Holiday. Hammond had been touched by a melodic magic that moved him to describe her thus: "She was the first girl singer I'd come across who actually sang like an improvising jazz genius".

Throughout her career she never gained the recognition her talent truly merited. It was only after her passing that Billie Holiday's legacy to music was critically examined with a fair mind and finally gained the deserved status as one of the best jazz singers of all time. Her rise to fame was not an easy path to navigate. She was brought up in poverty and did not enjoy a normal childhood as she was deprived of the opportunities every kid deserves. Reading the painstaking words of Billie Holiday herself brings a tear to the eye as she described her upbringing as her harsh reality: "I never had a chance to play with dolls like other kids. I started working when I was 6 years old".

Billie was seventeen years old when she was discovered and Hammond arranged her first recording in November 1933 on a Benny Goodman session where she sang her debut songs: "Your Mother's Son-in-Law" and "Riffin' the Scotch", with the latter being more successful selling in excess of 5,000 discs. In 1935 Hammond signed Holiday up for Brunswick Records and as she grew in confidence Billie started her experimentation with improvisation of melody to fit the emotion she thought the song deserved.

Her first hit to chart in the U.S. was her version of the Harry M. Woods song "What a Little Moonlight Can Do" which was a collaboration with the jazz pianist Teddy Wilson. Billie Holiday continued working jointly with Wilson as they took popular songs of the day and turned them into into jazz classics and her voice started gaining the recognition that deserved a solo career in her own right.

Billie Holiday toured as a vocalist for Count Basie and his big band and later became the first black woman to work with a white orchestra when she sang with bandleader Artie Shaw.

By 1939 Holiday was signed to Columbia Records who were reluctant to record a song that Billie had been singing to tumultuous applause in the jazz clubs of New York. The song was "Strange Fruit" that was originally a poem about lynching written by Abel Meeropol and Columbia were fearful of the reaction of music shop owners in the south. Upon Billie's insistence to record "Strange Fruit", Columbia granted her a one off release clause from her contract for a recording session with Vocalion Records who released it in 1939 and it went on to sell more than one million copies.

Strange Fruit became one of Billie Holiday's signature tunes and it created such an impact that the New York critic, Samuel Grafton, likened it to the French national anthem when he gave this analogy: "If the anger of the exploited ever mounts high enough in the South, it now has its Marseillaise".

The 1940's saw Holiday record a string of hit records and in 1947 she was at the pinnacle of her career, everything was going smoothly until it all came crashing down with a drug bust in New York. Her arrest on 16th May resulted in being convicted of narcotics possession for which she served one year in prison. Worse still, upon her release she was not eligible for a licence to play in cabarets and clubs where alcohol was sold meaning she was restricted to playing only in larger concert venues and theatres.

Her voice was always appreciated, but never truly rewarded because of the racial divide that prevailed in the U.S. during her era. From her working through the back end of prohibition up to her sad demise in 1959, Billie Holiday contended with a superficial world that looked down on her race but gave reluctant acceptance to her talents. Billie Holiday felt at home on the stage, but when the microphone was switched off she turned to alcohol and drugs for escapism.

In a cruel twist the police even arrested her on drug related charges in New York's Metropolitan Hospital. It was 1959 and she lay at deaths door handcuffed to her bed with a police guard at the door. Since the mid 1940's, Billie Holiday had been targeted by the Federal Bureau of Narcotics and it seemed they wanted to deprive her of a dignified death such was their over zealous approach to personal use possession of drugs. Billie passed away on 17th July 1959 aged just 44 years old.

This world lost a singer whose sultry voice and melodramatic singing style would be welcomed in a heaven not interested in the colour of her skin but happy to accept the beauty in her heart and songful nature of her voice. Billie Holiday's vocal improvisation mesmerised audiences as she could input any emotion at will to any line she wanted, her vocal stamp could take any song to another undiscovered level. She will always be remembered as the lady who sang the blues and an all time jazz great. In between songs she was also good for a one liner, so here is my compilation of 15 of the best Billie Holiday quotes.

The music critic Nat Hentoff wrote of her Carnegie Hall concert: "At one time, the musicians too applauded. It was a night when Billie was on top, undeniably the best and most honest jazz singer alive"

Frank Sinatra was impressed to say: "It is Billie Holiday who was, and still remains, the greatest single musical influence on me"

The music producer John Hammond who discovered Billie in a Harlem speakeasy said of her: "She was the best jazz singer I had ever heard"

The actress and singer Jeanne Moreau was glowing when she said about Billie: "She could express more emotion in one chorus than most actresses can in three acts" 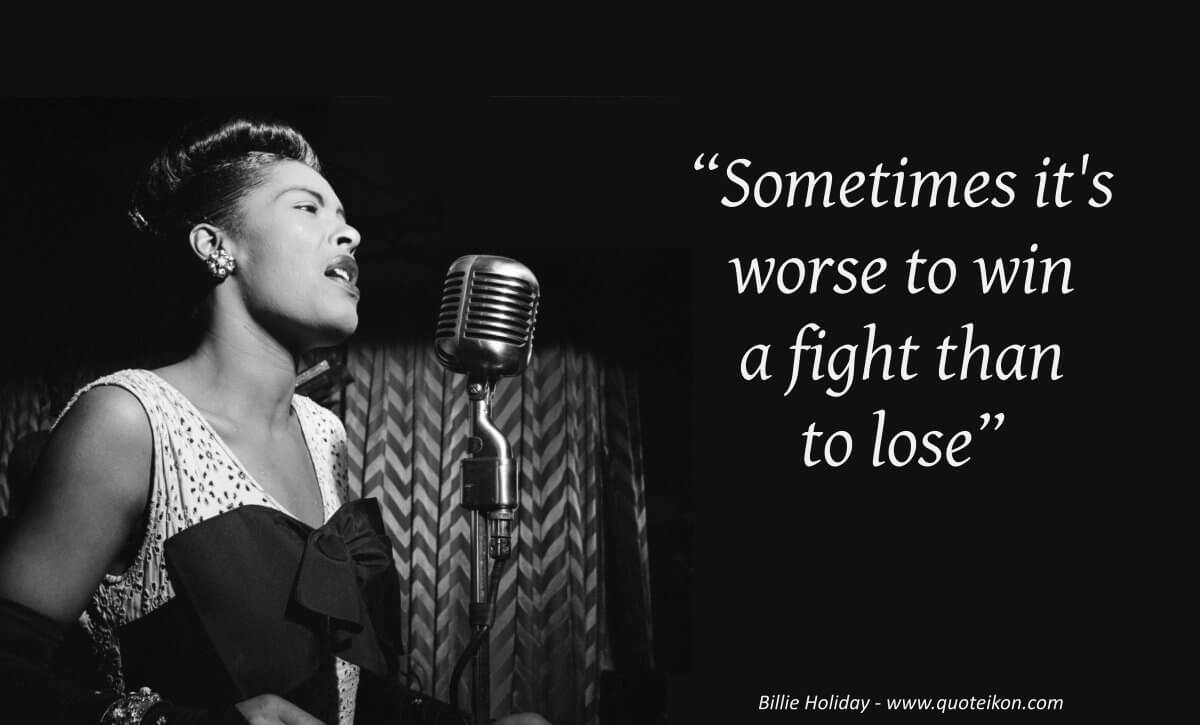 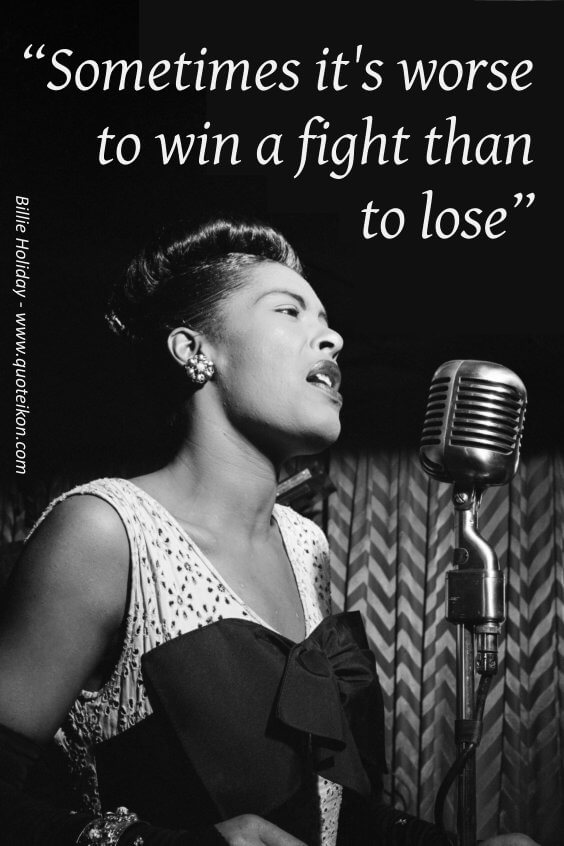