She had the voice of an angel, the timing of a stand up comedienne and an instinctive feel for acting which she used to rouse an audience to fever pitch. Her name was Judy Garland the teenage starlet who made it to the top and came back down just as quickly only to reinvent herself and rise up again and again and again.

Garland was born to a family of Vaudevillian's and started singing from a very young age with her sisters who were billed as both The Gumm Sisters and the Garland Sisters. All she knew was show business. By the time she was fifteen MGM had discovered her and signed her to a contract where she initially appeared in twelve movies. Before she was twenty she had married. But the loneliness of the child star haunted her and Judy had already felt the need to reach out and sit on a psychiatrists couch.

Judy Garland's story was one that is often described in a series of cliches about "stolen childhood", "self doubt" and "manic depression". According to her ex-husband Sid Luft she often self harmed and attempted suicide on numerous occasions.

The song that made her famous "Somewhere Over The Rainbow" waxed lyrical about "the dreams that you dare to dream really do come true". It seemed the life of this then impressionable fifteen year old girl rolled out into an endless search for this song's mystical happiness which proved a mirage of hope hidden from the realities of Tinsel Town induced fame.

Garland's performance in "The Wizard Of Oz" (1939) made her a screen legend in what is widely regarded as one of the greatest movies of all time. In total she made twenty-seven movies for MGM including acclaimed performances in "For Me and My Gal" (1942) which was Gene Kelly's first movie, "Meet Me in St. Louis" (1944) and "Easter Parade" (1948) starring with Fred Astaire.

The late 1940's were a tough time for Judy Garland. She suffered a nervous breakdown while filming "The Pirate" in 1947 and she spent time recovering in a private sanitarium. In 1949 during the making of "Annie Get Your Gun" her tardiness affected the filming schedule and she was eventually fired from the movie and replaced by Betty Hutton. She was suffering from depression and receiving electroshock therapy at the time.

In 1950 Garland parted company with MGM after fifteen years with the organisation. The parting was due to a contractual dispute and although Hollywood had written her off as finished she had other ideas as she would later prove.

Judy said at the time: "I wanted to black out the future as well as the past. I wanted to hurt myself and everyone who had hurt me". She had hit rock bottom. The only way from here was up. This was the turning point and the beginning of one of the greatest comebacks in Hollywood history.

Post MGM Garland picked up the pieces of her broken career and started doing radio appearing on the Bing Crosby Show. This led to her gaining renewed confidence and signing for a concert tour of the United Kingdom which proved highly successful as she played to packed houses and earned rave reviews.

Hot on the heels of her European success she returned triumphantly to New York in October 1951 where she played at the Palace Theatre and broke all box office records for the venue. Judy felt reborn as she harnessed all her vocal power to mesmerise the audience who stood to their feet in rapturous applause.

Garland then made an outstanding Hollywood comeback in 1954 in the movie "A Star Is Born" for which she was nominated for an Academy Award for Best Actress in a performance Time Magazine described as "just about the greatest one-woman show in modern movie history". Amazingly she did not take home the Oscar in a decision that was derided in the press with Groucho Marx calling it "the biggest robbery since Brinks".

In 1955 Garland starred in a television special "Ford Star Jubilee" which led to signing a three year TV contract with CBS. However a contractual dispute unravelled which was not settled until 1962 when the the first episode of "The Judy Garland Show" was aired with Frank Sinatra and Dean Martin co-starring. The show ran under various names until it was finally axed in 1964.

Back on the big screen Judy was to receive one further Academy Award nomination for her critically acclaimed role in "Judgment at Nuremberg" (1961). Her last movie was the 1963 musical "I Could Go On Singing" which co-starred Dirk Bogarde and was well received at the cinema and by critics.

Away from the stage and screen Judy was unlucky in love as she notched up five marriages and a string of failed love affairs. She became close friends with Marilyn Monroe who seemed a kindred spirit with her own set of personal and professional issues.

Shortly before Marilyn passed away they met at a party and Ms Monroe was trying to communicate a feeling of loneliness and fear to Judy. They were meant to meet up to discuss further but Judy had to perform in Europe and she never got the opportunity to talk.

Judy Garland spoke with sadness about that last meeting with Monroe: "That beautiful girl was frightened of aloneness - the same thing I'd been afraid of. Like me, she was just trying to do her job - garnish some delightful whipped cream onto some people's lives, but Marilyn and I never got a chance to talk. I had to leave for England and I never saw that sweet, dear girl again. I wish I had been able to talk to her the night she died".

It was on stage that Judy Garland felt most at home. It was where she could stretch her silken contralto voice around the theatre and grasp the audience's ears and minds like an acoustic enchantress rolling out her hits building up the intensity to an unequivocal standing ovation which she always adored.

Garland had an historic concert recorded at Carnegie Hall in 1961 that was described as "the greatest night in show business history" and the subsequent double album spent 95 weeks in the Billboard charts including 13 weeks at number 1.

But for all her successes she was just as infamous for her failures as the press always seemed hell bent on knocking Judy off the pedestal they had previously built her up to. She had star quality in abundance and the tenacity to bounce back against all the odds despite seemingly living ten lives in one roller coaster life under the rainbow of stardom.

Her daughter Liza Minnelli remembered her fondly: "I wish you would mention the joy she had for life, that’s what she gave me. If she was the tragic figure they say she was, I would be a wreck, wouldn't I? It was her love of life that carried her through everything. The middle of the road was never for her — it bored her. She wanted the pinnacle of excitement. If she was happy, she wasn’t just happy, she was ecstatic. And when she was sad, she was sadder then anyone. She lived eight lives in one, and yet I thought she would outlive us all. She was a great star, and a great talent, and for the rest of my life I will be proud to be Judy Garland's daughter. It wasn’t suicide, it wasn’t sleeping pills, it wasn’t cirrhosis. I think she was just tired, like a flower that blooms and gives joy and beauty to the world and then wilts away"

The crooner Bing Crosby recognised her talent: "The most talented woman I ever knew was Judy Garland. She was a great, great comedienne and she could do more things than any girl I ever knew. Act, sing, dance, make you laugh. She was everything. I had a great affection for her. Such a tragedy. Too much work, too much pressure, the wrong kind of people as husbands"

The director Charles Walters shared this observation: "Judy went to school at Metro with Ava Gardner, Lana Turner, Elizabeth Taylor, real beauties. Judy was the big money-maker at the time, a big success, but she was the ugly duckling ... I think it had a very damaging effect on her emotionally for a long time. I think it lasted forever, really" 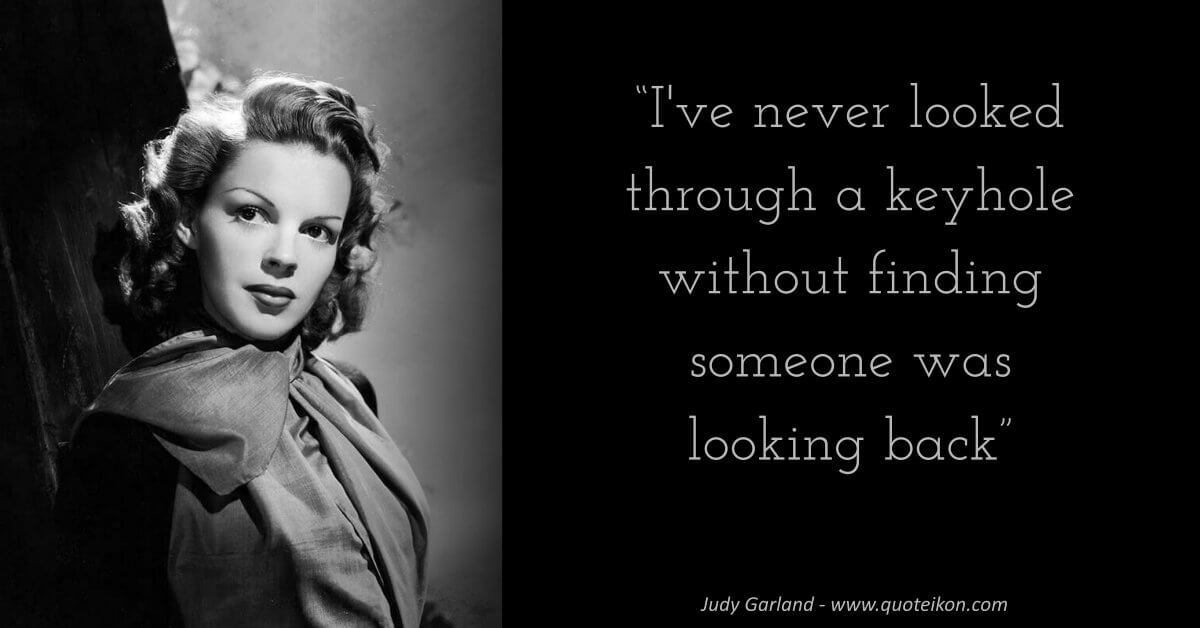