Katharine Hepburn was the headstrong Hollywood leading lady whose indomitable determination pushed her ambitions to the apex of Academy Award success as she bagged twelve nominations for best leading actress in a career that saw her take home the coveted Oscar statuette on four occasions.

Hepburn set the standard for the independent thinking actress with a drive to play strong willed characters that saw her earn her first best actress Academy Award in only her third movie "Morning Glory" (1933). Hot on the success of this Oscar win Hepburn played a flurry of roles through the remainder of the 1930's with the majority of them commercial failures, there were exceptions with "Alice Adams" (1935) seeing her receive another Oscar nomination but not winning and near the end of the decade she teamed up with Cary Grant (to some critical success) in Howard Hawks's comedy "Bringing Up Baby" (1938) and George Cukor's "Holiday" (1938).

By 1939 many Hollywood executives had deemed Hepburn as box office poison, they felt audiences had tired of the brashness and iconoclastic side of her acting personality which caused the actress to turn to Broadway to revive her flagging career.

Upon her suggestion the dramatist Philip Barry wrote "The Philadelphia Story" modelling the female protagonist on herself, the play was a hit and Hepburn bought the rights and promptly sold them on to the head of the Metro-Goldwyn-Mayer studio, Louis B. Mayer on the condition that she plays the lead and her favoured filmmaker George Cukor to direct. Mayer agreed to these terms but turned down her additional requests for Spencer Tracy and Clark Gable as her co-stars, instead he gave her Cary Grant and James Stewart. Released in 1940 "The Philadelphia Story" was a roaring comedic success that was nominated for six Academy Awards with James Stewart picking up Best Actor and Donald Ogden Stewart collecting the Best Adapted Screenplay award. Hepburn was also nominated for Best Actress but lost out to Ginger Rogers in "Kitty Foyle".

More importantly for Katharine she had reinvented herself as an actress turning herself into a more relatable character that the audience would laugh at to the point she evoked sympathy by showing herself as fallible in the most comedic of contexts. In 1956 The Philadelphia Story was remade as a musical comedy entitled "High Society" starring Bing Crosby, Frank Sinatra and Grace Kelly and although it was a box office success it did not receive the same critical acclaim as the original.

In 1942 Hepburn assisted with the script to "Woman Of The Year" and offered it to MGM who accepted her terms including her demand for Spencer Tracy with whom she went on to appear in a further nine movies together. The two hit it off with an on screen chemistry that also became an off screen love affair that would continue, both personally and professionally, up until his death in 1967.

Nine years on from her Academy Award nomination for best actress in "Woman Of The Year" she was again nominated for her role in the 1951 movie "The African Queen" whom she shared star billing with Humphrey Bogart. Again Katharine failed to win the coveted Oscar but her co-star Bogart did one better by winning the Best Actor Academy Award for his role as Charlie Allnut. After the movie, which was shot on location in Africa, Katharine Hepburn was impressed to say about Humphrey Bogart: "He was a real man - nothing feminine about him. He knew he was a natural aristocrat - better than anybody".

Hepburn was still on the trail of her second Best Actress Oscar and received further nominations for "Summertime" (1955), "The Rainmaker" (1956) where she lost out to Ingrid Bergman, "Suddenly, Last Summer" (1959) and "Long Day's Journey into Night" (1961) where Anne Bancroft stole her thunder.

Katharine Hepburn was entering the autumn of her career but there was still time for a late bloom of rapid success which she delivered with two Oscar winning Best Actress performances in consecutive years for her starring roles in "Guess Who's Coming to Dinner" (1967), which was her last movie with Spencer Tracy, and "The Lion in Winter" (1968) where she played the role of Eleanor of Aquitaine with great aplomb.

During the 1970's Hepburn's career was more memorable for her stage and television appearances than her movies with some highlights being the Broadway musical Coco, about the life of Coco Chanel that ran for nine months ending in August 1970 and a successful television production of Tennessee Williams' "The Glass Menagerie" in 1973.

In 1981, nearly 50 years after winning her first Oscar Statuette, Katharine Hepburn made history when she became the first actress or actor to become a four time winner of the Best Actress Academy Award for her role as Ethel Thayer in "On Golden Pond" in what was a remarkable achievement to cap off a wonderful silver screen career.

Katharine Hepburn was equally comfortable slipping into sharp witted comedic roles or grasping the dramatic gist of a script by the horns with her own inimitable panache where she could verbally joust with her leading men or display her natural authority with an air of on screen sophistication that saw her become the finest actress of any generation from the Golden Age of Hollywood up to the end of the twentieth century.

The diversity of her range was as broad as her outspoken personality which made her a heroine of the stage and silver screen and gave inspiration to generations of aspiring actresses all keen to emulate the Katharine Hepburn thespian legacy combined with a single minded no nonsense vision of feminine independence which provided some wonderful words of wisdom to help me compile this list of 28 of the best Katharine Hepburn quotes.

Bette Davis kept a watchful eye on her rival: "All my film career I had envied Katharine Hepburn's high cheekbones and narrow face"

Humphrey Bogart shared this anecdote about filming The African Queen: "You could argue with her, but she was tough. When Jack [cinematographer Jack Cardiff] saw her striding into the jungle alone one morning, he thought, 'God help the jungle'."

The director George Cukor spoke of her first screen test: "She was unlike anybody I'd ever seen or heard. I was rather moved by the test, although the performance wasn't that good. But I thought, `That girl is rather interesting'."

The Film academic Andrew Britton shared this observation: "No other star has emerged with greater rapidity or with more ecstatic acclaim. No other star, either, has become so unpopular so quickly for so long a time"

Her long time lover Spencer Tracy spoke of why he never left his wife for Katharine: "I can get a divorce whenever I want to. But my wife and Kate like things just as they are"

The writer Andrew Scott Berg summed her up thus: "What she lacked in euphony she made up for in guts" 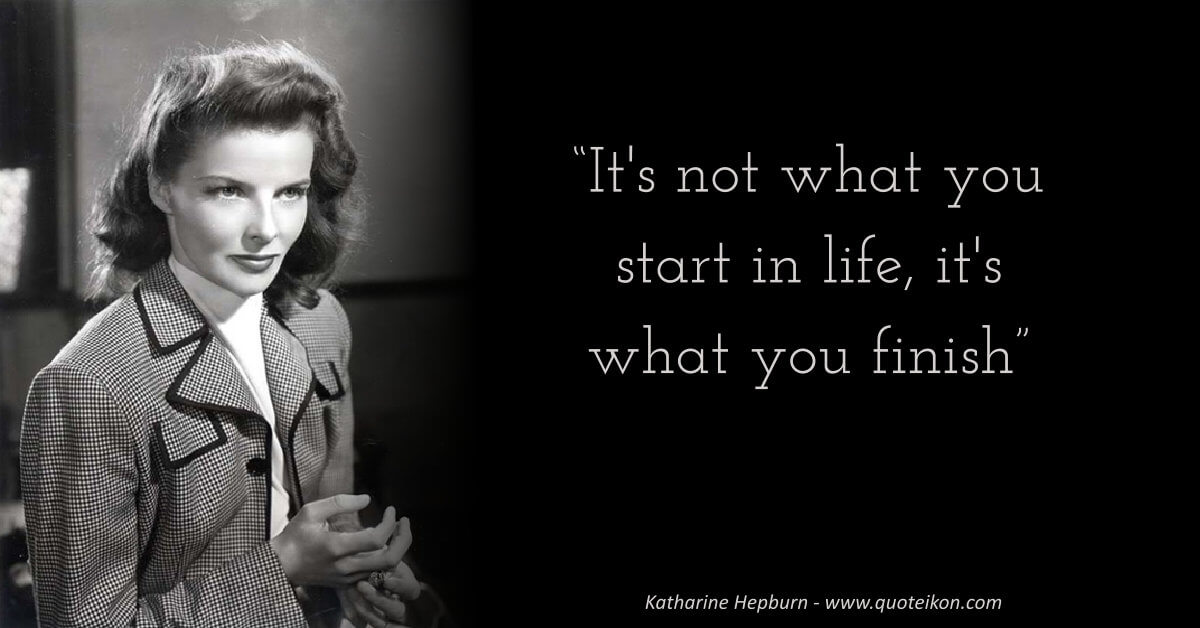