Fred Astaire was the limber limbed actor who danced his way into the hearts of nation with a fleet-footedness and warm smile that was a temporary antidote to the realities of America's 1930's depression. He was a natural performer who used his smooth moves to compliment each movie in what seemed an effortless synchronisation with the musical score.

Astaire had grace and poise which he delivered with an air of light hearted sophistication wearing his trade mark top hat and tails whilst clutching his cane and cutting a dashing figure on the silver screen. His career started at the tender age of five courtesy of his mother who saw Fred and his equally talented sister Adele as a perfect sibling act for the vaudeville circuit.

After some success in vaudeville the siblings debuted on Broadway in 1917 in a patriotic revue aimed at servicemen called "Over The Top". By 1932 his sister had retired and Fred set his mind to a Hollywood career making his big screen debut with a small role in the 1933 movie "Dancing Lady" before later that year successfully starring with Ginger Rogers for the first time in "Flying Down to Rio".

Ginger was an adept dancer and their on screen chemistry saw them appear in a further nine movies together culminating in the 1949 film "The Barkleys of Broadway". The dapper Astaire was often described as the best dressed actor in American movies and he shared top billing with numerous Hollywood leading ladies including Rita Hayworth, Judy Garland, Paulette Goddard and Audrey Hepburn.

His career was a far cry from the summary of his first screen audition in which he was described as: "Can't act. Can't sing. Balding. Can dance a little." The irony of understatement made this description an immortal quote that gave heart to all budding thespians and dancers who followed in his quick footed steps.

His good friend the the crooning baritone Bing Crosby used to despair at the thought of having to dance with him and he was quoted as saying: "But when you're in a picture with Astaire, you've got rocks in your head if you do much dancing. He's so quick-footed and so light that it's impossible not to look like a hay-digger compared with him".

Widely acknowledged as one of the greatest dancers of the twentieth century his elegant screen choreography lives on as an inspiration for generations of wannabe professional dancers. Away from his perfectionist choreography he was also great for a quick quip, so here is my compilation of 20 of the best Fred Astaire quotes

The actress Rita Hayworth was appreciative of his contribution to her career: "I guess the only jewels of my life were the pictures I made with Fred Astaire"

The U.S. president and former actor Ronald Reagan recognised his immense talent: "Fred was, in every sense of the word, a 'superstar'. He was the ultimate dancer - the dancer who made it all look so easy"

The composer Irving Berlin saw there was more than just dancing in the man: "He's not just a great dancer; he's a great singer of songs. He's as good as any of them - as good as Jolson or Crosby or Sinatra. He's just as good a singer as he is a dancer"

Rudolph Nureyev paid him the ultimate compliment: "He was not just the best ballroom dancer, or tap dancer, he was simply the greatest, most imaginative, dancer of our time"

Ginger Rogers said of her dancing partner: "I thought I knew what concentrated work was before I met Fred, but he's the limit. Never satisfied until every detail is right, and he will not compromise. No sir! What's more, if he thinks of something better after you've finished a routine, you do it over" 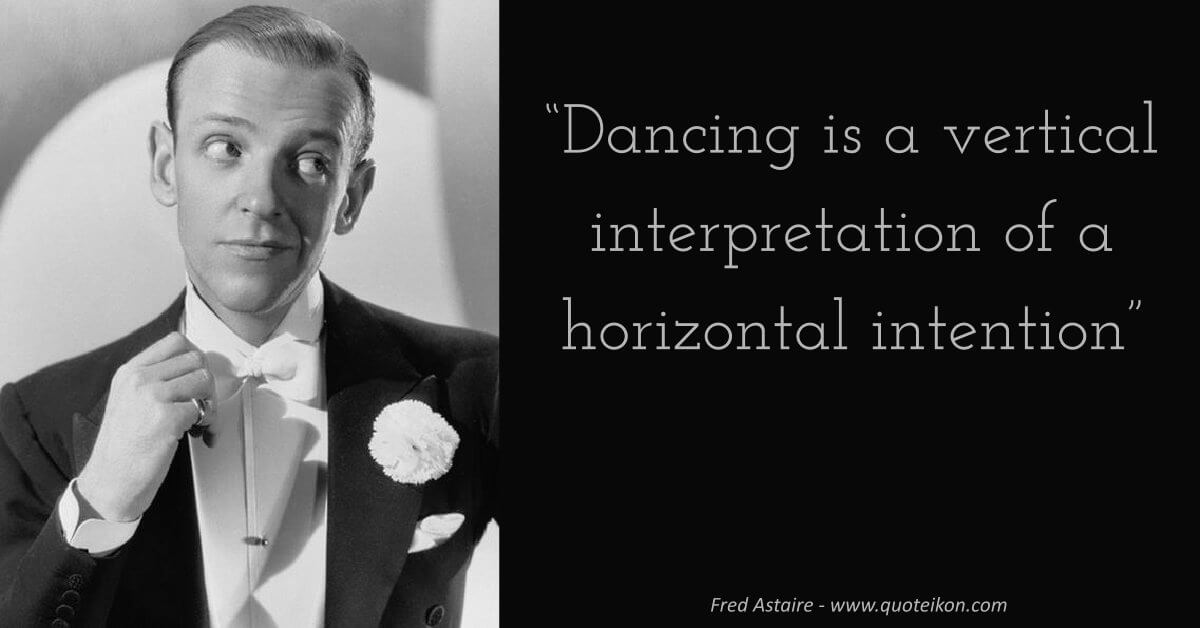