Leon Trotsky was the radical student who rose up the revolutionary ranks to play a leading role in achieving the Russian revolution but more importantly stabilising it during its aftermath and the Russian civil war.

Before he met Vladimir Lenin and Joseph Stalin the young Bronshtein was already organising illegal union activity in Nikolayev for which he was subsequently sentenced to four years exile in Siberia where he was to meet members of the newly formed Russian Social Democratic Labour Party to which he would become affiliated. He escaped his Siberian jail using forged papers bearing the name Leon Trotsky and he decided to keep his new found pseudonym for the remainder of his life.

The next few years were spent moving around Europe supporting the new socialist cause with his writing and occasional speeches. He was active in the October revolution of 1917 as the forces of Lenin, Trotsky and Stalin were all aligned in completing the Bolshevik takeover of power.

Trotsky's contribution to the revolution was appreciated by his then ally Joseph Stalin who was quoted as saying: "All practical work in connection with the organization of the uprising was done under the immediate direction of Comrade Trotsky, the President of the Petrograd Soviet. It can be stated with certainty that the Party is indebted primarily and principally to Comrade Trotsky for the rapid going over of the garrison to the side of the Soviet and the efficient manner in which the work of the Military Revolutionary Committee was organized".

However Stalin later expunged all Soviet records of anything remotely complimentary as Trotsky would become his political adversary. Trotsky played a major role in winning the Russian civil war by organising and effectively creating the Red Army which by 1920 would brush aside the threat of the anti-communist White Army. His successes were appreciated but short lived as in 1924 the death of Lenin would cause an internal power struggle where he lost out to his nemesis Joseph Stalin.

Trotsky was slowly eased out of all positions of authority and by 1929 he was sent into an exile that would see him move around until he reached his final destination Mexico.

Stalin had killed millions with his purges in the 1930's including all of the former Bolshevik leadership and even living in Mexico Stalin still viewed Trotsky as a political threat. After a few failed assassination attempts he finally got his man when a covert Russian agent called Ramón Mercader who befriended Leon killed him with a blow from behind using an ice pick.

His legacy lives on as his works have been studied and used by generations of left wing politicians who adopted his policies. He was a great writer and an inspirational orator who was also good for a one liner, so here is my compilation of 20 of the best Leon Trotsky quotes

The eminent sociologist C. Wright Mills opined this during the Cold War: "Here's to the day when the complete works of Leon Trotsky are published and widely distributed in the Soviet Union. On that day the USSR will have achieved democracy"

Historian Geoffrey Swain was adamant who deserved the revolutionary plaudits by saying: "The Bolsheviks triumphed in the Civil War because of Trotsky's ability to work with military specialists, because of the style of work he introduced where widescale consultation was followed through by swift and determined action"

The Russian historian Vladimir Cherniaev touched on a political karma when he said: "Trotsky bears a great deal of responsibility both for the victory of the Red Army in the civil war, and for the establishment of a one-party authoritarian state with its apparatus for ruthlessly suppressing dissent"

Vladimir Cherniaev went on to say that: "Trotsky was implicated in many practices which would become standard in the Stalin era, including summary executions"

The Soviet military intelligence officer Viktor Suvorov summed up Trotsky's insights: "'Stalin finally untied Hitler's hands, as well as those of his enemies, and thereby pushed Europe towards war'. He said this at a time when Chamberlain was rejoicing that there would be no war, Mussolini was regarding himself as a peacemaker and Hitler still had no intention of issuing a directive to attack Poland, even less France. At the moment when Europe was heaving a sigh of relief in the belief that there would be no war, Trotsky already knew both that war would quickly come and who would be to blame for it" 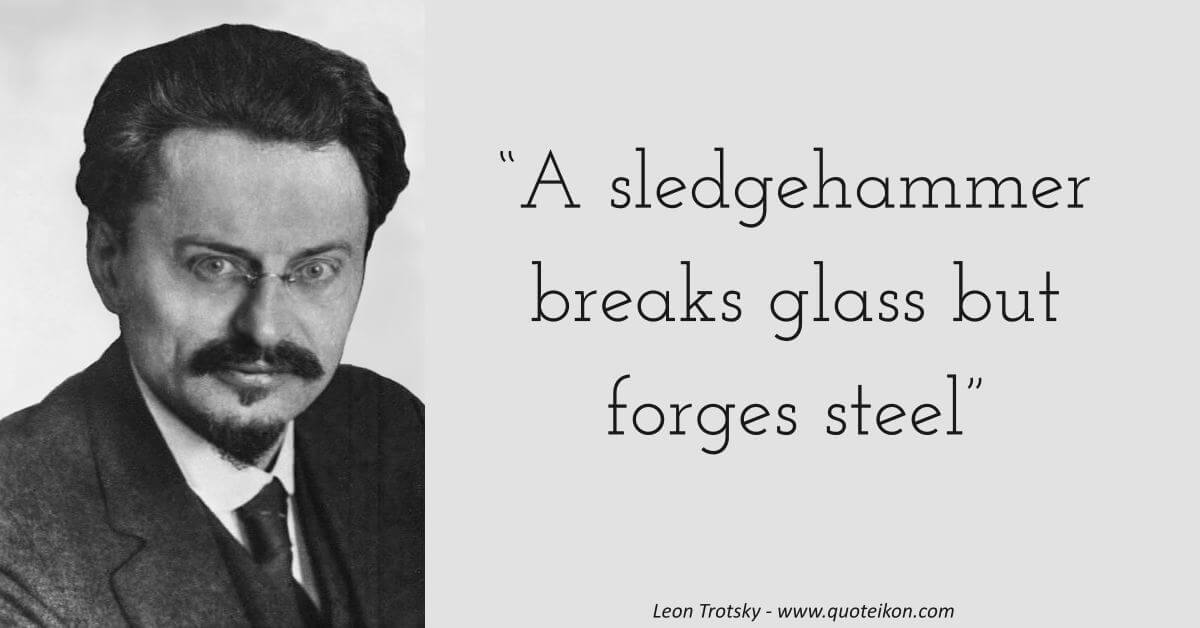