As twentieth century genocidal dictators go Pol Pot was a 'mini-me' version of Mao Zedong combined with the ego of Adolf Hitler and the ruthlessness of Joseph Stalin, however even the Soviet dictator may have raised those bushy eyebrows of his in bewilderment at the agrarian revolution that the Khmer Rouge leader was to inflict upon the population of Cambodia.

Pol Pot, which was a pseudonym, was born into a well to do family who named him Saloth Sâr and as he grew up in French Indochina he showed enough educational promise to earn a scholarship to study radio electronics in France. It was in Paris that Saloth Sâr was first inspired by Marxism as he and fellow students immersed themselves in the writings of Karl Marx but quickly moved on to the works of chairman Mao and Joseph Stalin whose ideas were more aligned with their own ideology of freeing Cambodia from the yoke of French colonialism.

Saloth Sâr also learned from both Stalin and Lenin the idea to keep changing your name to confuse your enemy which is a trait he followed until his rise to power under the name that every one now remembers, Pol Pot.

Pol Pot returned to Cambodia in 1953 and spent the remainder of the decade building up support for his Communist inspired dream of independence for Cambodia. This was a turbulent period in the region with the tentacles of the Soviet, Chinese, French and American governments all trying to influence who held control in the corridors of power with the Western leaders showing apprehensive discernment at the Ho Chi Minh inspired Việt Minh forming a Communist government across the border in North Vietnam.

By 1962 Pol Pot was fighting a guerilla war against the government of Prince Norodom Sihanouk. From his jungle base Pol Pot was now leader of the Cambodian Communist Party directing an armed resistance movement that was to become infamously known as the Khmer Rouge (Red Cambodians).

In 1970 an American backed military coup d'état ousted Prince Norodom Sihanouk and the Cambodian former leader, who was also an enemy of Pol Pot, sought out the Khmer Rouge leader and formed an unlikely alliance that, coupled with indiscriminate American bombing in Cambodia, would pave the way for the Communist ascent to power in Cambodia.

By 1975 American interference in the region was waning as they pulled their troops out of Vietnam and stopped support for the Cambodian administration. Pol Pot seized this opportunity and his peasant army marched into Phnom Penh giving the Khmer Rouge control of the country whereby they quickly implemented their version of a Communist utopia.

Once in power Pol Pot had a plan for an agrarian society that he had seen flourishing in the remote hills of north eastern Cambodia and coupled with his Mao Zedong inspired "Great Leap Forward" policy, he went about a series of purges that saw the educated executed, the cities emptied at gun point, private property abolished, religion outlawed and all forms of money effectively ended.

Urbanites were forced at gun point into communes where they had to work the land in what became infamously known as the 'Killing Fields'. Special prisons were set up such as S-21 jail in Phnom Penh, which is now known as the Tuol Sleng Genocide Museum, the urbanites were considered 'persona non grata' and classed as "new people" without rights and as such many city dwellers could be killed on a whim by the Khmer Rouge or sent to these prisons where they would meet a brutal end.

With the Khmer Rouge aligning themselves to Communist China who had backed them with arms and funds for years and neighbouring Vietnam backed by the Soviets there was rising tension along the border where skirmishes between both factions regularly occurred. In December 1978 the Vietnamese invaded Cambodia and quickly overrun the Khmer Rouge who were forced to flee the country into neighbouring Thailand. Vietnam installed a puppet government and the Khmer Rouge went back to guerilla warfare which lasted for 17 years until the death of Pol Pot.

Pol Pot's legacy carries the burden of the 2 million people who died of starvation, disease, exhaustion or execution as the agrarian utopia he envisioned evaporated into the blood stained soil that was supposed to feed the rural proletariat. The blood curdling discoveries of mass graves and the horrifying stories of survivors are a spine chilling reminder of the dangers of extreme ideologies that are usually reactions to outside interference that never consider the high price of human collateral damage to be incurred as a result.

Pol Pot was never a public facing dictator but in his rare interviews after the downfall of his bloodstained regime he never showed any remorse for the Cambodian holocaust he presided over, he remained steadfast that everything he did was for the people and without the Khmer Rouge struggle his beloved country would have been consumed by Vietnam. Although he reluctantly admitted some mistakes by the Khmer Rouge he adamantly maintained the stance that his conscience was clear despite ushering intimidating statements such as: "He who protests is an enemy; He who opposes is a corpse", there were other instances of seismic sayings so this is my compilation of 17 of the best Pol Pot quotes.

The reporter Peter Sainsbury spoke of his personal legacy: "Pol Pot died empty. He had long ago rid himself of humanity and compassion"

Whilst his widow Mea Son spoke of his good deeds: "He tried his best to educate the children not to be traitors. ... he was a good man, a patriot, a good father"

The Communist politician Khieu Samphan pointed out his sacrifice: "[Pol Pot] sacrificed his entire life … to defend national sovereignty (and) in demanding social justice. There was no policy of starving people. Nor was there any direction set out for carrying out mass killings. There was always close consideration of the people's well-being"

Ta Mok was a Cambodian military chief that was once loyal to Pol Pot and later changed his tune: "It is good that Pol Pot is dead. I feel no sorrow.… I hope he suffers in hell after death"

The Albanian Communist leader Enver Hoxha was quoted as saying: "In Cambodia, the Cambodian people, communists and patriots, have risen against the barbarous government of Pol Pot, which was nothing but a group of provocateurs in the service of the imperialist bourgeoisie and of the Chinese revisionists, in particular, which had as its aim to discredit the idea of socialism in the international arena"

The former ruler of Cambodia Norodom Sihanouk described him thus: "We know that he is a monster but if you meet him he is nice. He is not ugly, and is a little fat. He is a man who smiles, speaks gently, quite unlike his image as a second Hitler"

Former Khmer Rouge soldier Mea Chron gave this assessment: "Pol Pot’s opinion is not bad – he liked to help people and he did not want to discriminate between poor and rich. Everyone has a fair life"

The journalist Elizabeth Becker shared this observation: "Pol Pot is a reminder of the menace of rulers who amass total power over a state. When I interviewed him he was a dictator who exuded more than a hint of megalomania. He was also charming and confident that he would rule Cambodia for decades to come" 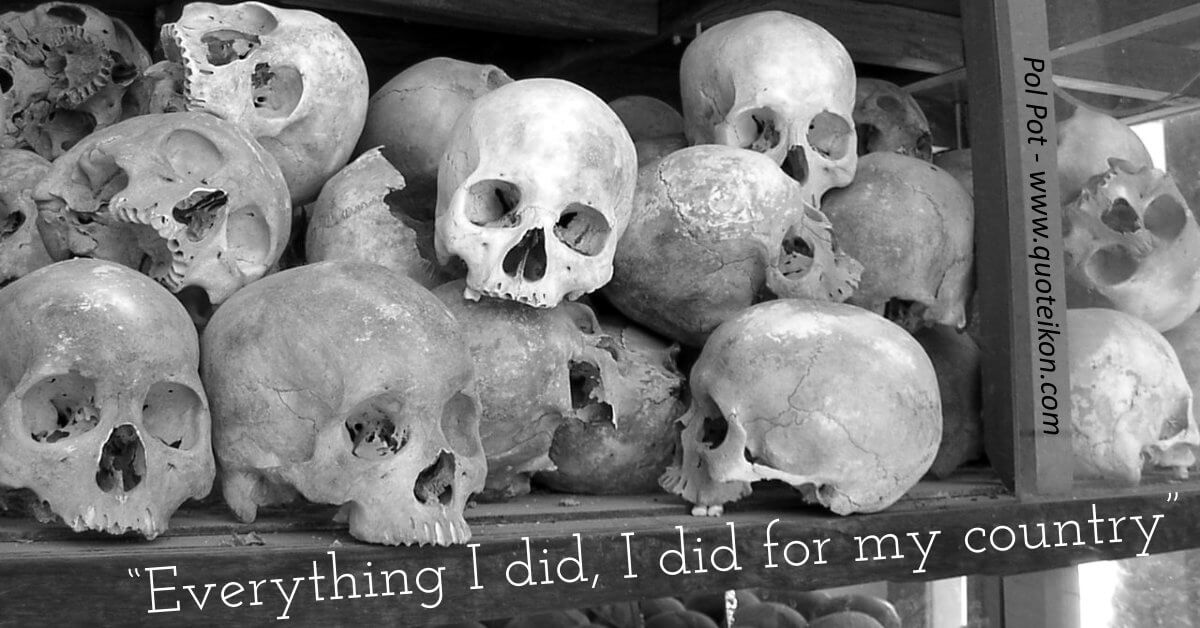