With an outpouring of song spanning eight separate decades Irving Berlin could be described as the man who composed the twentieth century such was the quality of his prolific output. From his humble beginnings making hits in Tin Pan Alley to the Ziegfeld Follies up to Broadway fame and Hollywood stardom Irving Berlin set the tone to the tunes that stirred the American soul with his emotive cameos of musical elegance.

His first brush with fame was his 1911 hit "Alexander's Ragtime Band" which established his reputation as a serious composer and song writer. Within one year it was an international hit being translated into dozens of languages and various covers would go on to command a top twenty chart position during the next four decades.

Berlin did not just compose the music he also wrote the actual lyrics and retained the copyright under his Irving Berlin Music Corporation which he established in 1919 to publish and protect his body of works.

Everything was not all plain sailing as his early years were poverty stricken after his family fled anti-semitic persecution within the Russian empire to settle in New York's notorious lower east side. His was a classic rags to riches story that encapsulated the essence of the American dream and it was a transformation he would never forget as Berlin came to deeply appreciate the opportunity America rewarded him for his talent.

Berlin was drafted in 1917 and the army put good use to his talents as they commissioned him to create the revue "Yip, Yip, Yaphank" using army personnel. The show raised morale and much needed funds as it went on to earn $150,000 for his base Camp Upton, in Yaphank. After the war he returned to Tin Pan Alley and created new Ziegfeld Follies shows and wrote for the musical comedy "The Cocoanuts" starring the Marx Brothers in 1929. He also entered into a partnership with Sam H. Harris to build the Music Box Theatre which was a small 984 seat venue on Broadway that the Berlin organisation was a joint partner until 2007 when the Shubert Organization took full ownership.

The Great Depression years saw Berlin's focus change to creating the scores for musicals on the silver screen as he got Ginger Rogers and Fred Astaire delightfully dancing in "Top Hat" (1935), "Follow The Fleet" (1936) and "Carefree" (1938). In 1938 Kate Smith sang on the radio the legendary Irving Berlin song "God Bless America" and the nation fell in love and adopted it as the peoples unofficial national anthem of the United States.

In 1942 Bing Crosby crooned his way through the movie "Holiday Inn" and the world discovered another Berlin classic as "White Christmas" has become the de-facto festive song played with annual relentless relish in the approach to every Christmas. In the same year Berlin wrote the wartime stage musical "This Is The Army" which was later made into a screenplay released in cinemas in 1943 that grossed just under $10 million dollars which was donated to the Army Emergency Relief fund.

After WW2 he went back to the stage with the highly successful musical "Annie Get Your Gun" that first opened on 16th May 1946 at the Imperial Theatre on Broadway and ran for 1,147 performances spawning memorable songs like "They Say It's Wonderful" and "Anything You Can Do I Can Do Better".

Irving Berlin was nominated on eight occasions for an Oscar with his only success being the Academy Award for White Christmas in 1943. Over the course of his career he wrote over 1,500 songs including 20 Broadway productions and 15 Hollywood movies. The timeless nature of his repertoire of music has saw major artists from every decade reproducing his work with top performers such as Billie Holiday, Ella Fitzgerald, Elvis Presley, Frank Sinatra, Diana Ross and Lady Gaga, to name but a few, all recording versions from his play list. Such was his stature, Cole Porter included this iconic line in his hit song "Anything Goes": "You're the top, you're a Waldorf salad; You're the top, you're a Berlin ballad".

Irving Berlin had a talent for a melody and the touch of genius with the laconic lyrics he liberally applied to each timeless tune he penned. He understood the value of lyrical compression in songwriting as he became a master of setting a scene and resolving it with minimal fuss and even less written lines. Although he never left the stage he successfully traversed every medium from the silent era and radio through to the golden age of Hollywood and television as his beautifully crafted songs have made a considerable contribution to the soundtrack of the 20th century and beyond.

Always a modest man he became an American patriot to the core as he never forgot the opportunity his adopted country gave him. Mostly remembered for his catchy tunes and lyrical lines he was also quick with a quip when required, so this my compilation of 22 of the best Irving Berlin quotes.

The violinist Isaac Stern gave this assessment: "American music was born at his piano"

The composer George Gershwin recognised his talent: "His music has that vitality—both rhythmic and melodic—which never seems to lose any of its exuberant freshness; it has that rich, colorful melodic flow which is ever the wonder of all those of who, too, compose songs; his ideas are endless"

The composer Jerome Kern described him thus: "Irving Berlin has no place in American music. He is American music. Emotionally, he honestly absorbs the vibrations emanating from the people, manners and life of his time and, in turn, gives these impressions back to the world—simplified, clarified and glorified"

The biographer Ian Whitcomb spoke of when he did his duty for his country: "At the grand finale... Sergeant Berlin led the entire 300-person cast off the stage, marching them down the theater's aisles, singing 'We're on Our Way to France,' all to tumultuous applause. The cast carried off their little producer like he was victor ludorum...Tin Pan Alley had joined hands with real life"

The composer Stephen Sondheim was impressed to say: "What distinguishes Berlin is the brilliance of his lyrics. 'You Can't Get a Man With a Gun'—that's as good a comic song as has ever been written by anybody. You look at the jokes and how quickly they're told, and it still has a plot to it. It's sophisticated and very underrated"

The critic Richard Corliss shared this observation: "I'm Dreaming of a White Christmas. When we sing that we don't hate anybody. And there are things we love that we're going to have sometimes if the breaks are not too bad against us. Way down under this latest hit of his, Irving Berlin catches us where we love peace"

The composer Douglas Moore made this comparison: "It's a rare gift which sets Irving Berlin apart from all other contemporary songwriters. It is a gift which qualifies him, along with Stephen Foster, Walt Whitman, Vachel Lindsay and Carl Sandburg, as a great American minstrel. He has caught and immortalized in his songs what we say, what we think about, and what we believe" 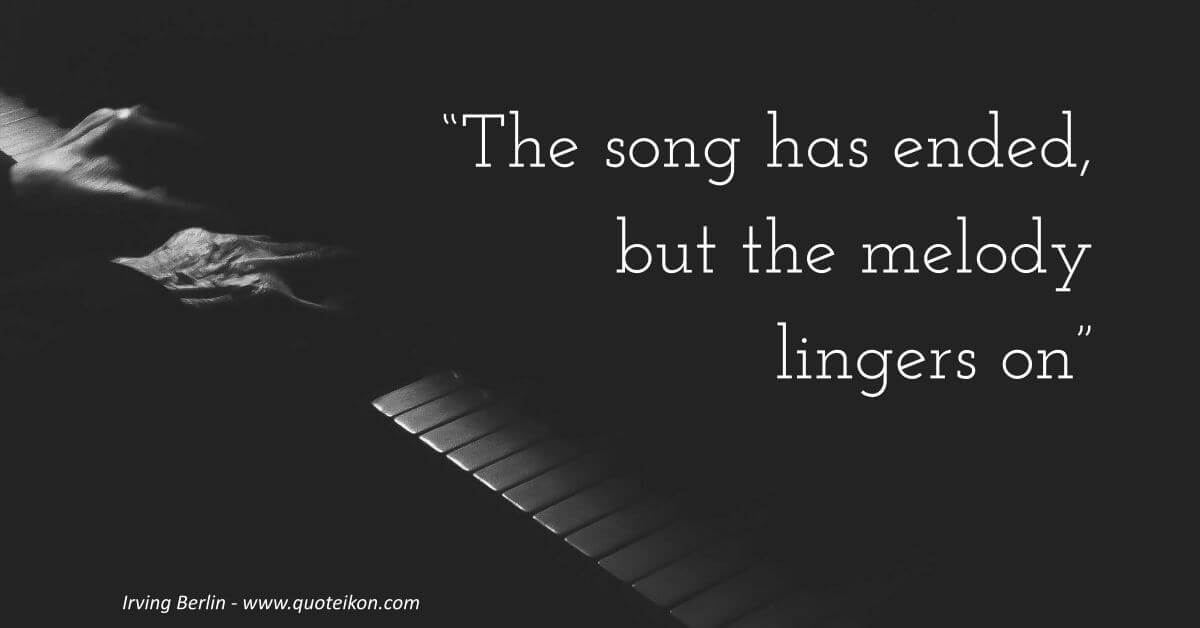