Alexander Pushkin, The Poet Who Pushed Pride to Death

Honour. It was his honour that killed him. That fateful evening when pride prevailed and a pistol's projectile pierced the cold St Petersburg air and struck the poet in the abdomen. The brave poet rose in pain and responded in kind striking the arm of his opponent. The poet's name was Alexander Pushkin. He died two agonising days later, but, not before forgiving his fellow duellist Georges-Charles d'Anthès.

The ego is a strange beast that feeds on self-induced self-importance and grows in tandem with any perceived insult. Pushkin was an impulsive man who was prepared to die to keep his pride intact.

The bible exalted the maxim: thou shalt not covet thy neighbour's wife. Pushkin's young wife was said to be the most beautiful lady of her day and attracted many admirers. Her immaturity fed into the male interest through her own flirtatious innocence. Some assumed there to be no smoke without fire. The tattling tongues of tortuous mischief triggered a two-timing theme that troubled the poet. What happened next was the inevitable conclusion for a tormented over-thinker.

Pushkin Gave Meaning to Pride Before a Fall

He was previously, challenged seven times to duel. Alexander was immersed in the culture of pride and he had, historically, issued more than twenty challenges to duel against various perceived challenges to his honour. Fortunately for him his friends and relatives intervened and he only fought in four recorded duels. Playing the odds is a fools game, pride comes before a fall. It was only a matter of time before the odds of inevitability would glimpse the grim reaper's shadowy scythe.

Duels had been outlawed in Tsarist Russia since the reign of Peter The Great. But Pushkin was a man fuelled by pride. His ego knew no bounds and was willing to traverse the terrain of any trolled tale to extract vengeance to satisfy his sense of honour.

There is much conjecture about the events that led to the infamous pistols at dusk duel to the death with Georges-Charles d'Anthès. The aftermath however is undisputed. Pushkin, in pain was calm and measured with his words. He was relieved to receive a note from the Tsar saying his wife and children would be cared for. The aristocracy respect honour, even if they did make duelling illegal.

Pushkin who? Said the rest of the world when asked who is Russia's greatest writer? Beyond the Baltic's, Dostoevsky and Tolstoy are the most famous scribes of Russian origin. However, once you step off a plane in Moscow and ask the same question to a Russian then the unequivocal answer is Alexander Pushkin is the undisputed father of Russian literature.

The poetic pen of Pushkin pumped peppery life into the plain pastel palette of Russian literature devoid of their very own Byron, Dante or Shakespeare. Pushkin was the proverbial breath of fresh air that suspired the spirit of inventiveness into Russian writing. The days of Russian folklore tales remained, but once the spark of Pushkin ingenuity was added to the smorgasbord of stories it gave each subsequent generation of Russian writers an inkwell of inspiration in which to indulge imagination.

Although borne of aristocracy, the silver spoon did not sit right on the saliva of Pushkin. He was a rebel whose poetry reflected a certain disdain towards the establishment. This led to his work being censored and saw him banished to a Crimean exile far from the impressionable masses of Moscow and Saint Petersburg.

The Tsar, Alexander I, was exasperated by him. He sensed the genius in his writing but despaired at some of his subject matter. After the death of the emperor his successor was Nicholas I. The newly crowned Tsar had to immediately face an uprising by the Decembrist movement who were looking for political reform. The rebellion was quickly quelled in December 1825 and even though Pushkin was in exile, many of the Decembrist's were found to be carrying his poems which they used for inspiration to revolt. This irked the Tsar who, like his predecessor Alexander I, had a soft spot for the poet but needed to remain pragmatic for power.

An 1826 Autumnal audience with the new Tsar secured some new found liberty for Pushkin, but it came with a price to pay. Pushkin agreed the Tsar would be given sole discretion as the only censor to his writing. The meticulous eye of Tsar Nicholas was unforgiving in re-writing the narrative, but, he was also careful to maintain the flow of sensory inspired imagination that passed so poignantly from pen to paper for Pushkin.

His work became a mainstay of the Russian educational system. To this day, most Russian's can recite a Pushkin poem at the drop of a hat. Pushkin's influence is endemic in Russian culture. He is Russia's Byron, Dante and Shakespeare all rolled into one.

The Legacy of Alexander Pushkin

There was never a dull moment in the life of the poet nicknamed the Russian Shakespeare. He was the foremost Russian romantic poet of his generation and he lived true to his word to match this romanticist notion. He had it all; love affairs, scandals, fights, duels, controversy and clashes with the establishment. It was a swashbuckling 37 years before his untimely but unsurprising early demise. The legacy of Alexander Pushkin is still alive and in the mind of every sentimentalist with a heart, soul and an appreciation of fine literature.

Pushkin may not have dodged a bullet on that fateful January day of 1837. But his spirit will live on eternally in the minds and hearts of Russian's who understand his tragedy whilst loving his fearless fortitude and free-and-easy form of literature.

The Russian novelist, Fyodor Dostoevsky, was impressed to say: "There had never been a poet with a universal sympathy like Pushkin’s. And it is not his sympathy alone, but his amazing profundity, the reincarnation of his spirit in the spirit of foreign nations. It is a reincarnation almost perfect"

The author Ivan Turgenev spoke of his influence on Russian culture: "The very essence, all the features of his poetry, chime with the features and essence of our people"

The novelist Nikolai Gogol was inspired to describe him as: "a rare phenomenon; a writer who gave to his country poems so admirable that they attracted the attention of the whole civilised world; a poet who won respect and love for the language, for the living Russian types, the customs, and national character of Russia. Such a writer is indeed a rarity"

Upon hearing the severity of Pushkin's wound's, Tsar Nicholas sent him a note: "If it will be the will of God that we shall not meet again, I send you my pardon, and advise you to receive the last Christian rites. As to your wife and children, they need cause you no anxiety. I take them under my own protection"

Literary critic Elaine Feinstein compared him to a musical legend: "The genius of Alexander Sergeyevich Pushkin transformed every form of Russian literature he touched. What I admire most is the ease of his invention, his range and his own impish courage. His life was as poignantly short as that of Mozart, whom in many ways he resembled"

The Russian historian, Viktor M. Zhirmunsky shared this assessment: "The topic of Pushkin as the concluder of the Russian Classicism has long been awaited for, but it calls for multiple preliminary works on the Russian language of the 18th century, and those have yet to appear. On the other hand, the question emerges of 'Pushkin's heritage' in 19th century. The poets of the 19th century were not Pushkin's disciples; after his death, the Romantic tradition prevailed, descending from Zhukovsky and nurtured under the German influence"

The poet Vladislav Khodasevich pondered he was a man before his time: "In spite of all his fame, Pushkin, during his lifetime, was not appreciated deeply enough, even by the most insightful of his contemporaries"

Khodasevich went on to say: "Only after Dostoevsky's famous speech [June 8, 1880] Pushkin appeared not only as "the Sun of our poetry" but as the prophetic phenomenon"

A Russian poet, Marina Tsvetaeva spoke with contempt of his wife: "A beauty and nothing else, just a beauty, without a brain, a soul, a heart, without any talent. Nude beauty, striking like a sword. And she struck"

Literary translator, Richard Pevear, noted his influence: "The unusual thing about Russia is that it reached cultural maturity in the nineteenth century. Russia didn't have the Middle Ages of Dante and Chaucer, the Renaissance of the Italians, or the Elizabethan age of the British. They weren't even sure what language to write in. Pushkin more or less created the Russian literary language, and Pushkin was born in 1799. They were doing for the first time what other cultures had been doing for hundreds of years"

The literary critic, Apollon Grigoryev, summed him up thus: "Pushkin is our everything: Pushkin is the presenter of all of our psyche, especially that part that remains our psyche, our distinction"

The biographer, Henri Troyat, spoke of his importance to Russian literature: "Pushkin grew with the years. Every other writer claimed descent from him. Inexplicably, the whole of Russian literature proceeded from his genius. Poetry, novels, short stories, history, theater, criticism—he had opened up the whole gamut of literary endeavor to his countrymen. He was first in time, and first in quality. He was the source. Neither Gogol nor Tolstoy could have existed without him, for he made the Russian language; he prepared the ground for the growth of every genre" 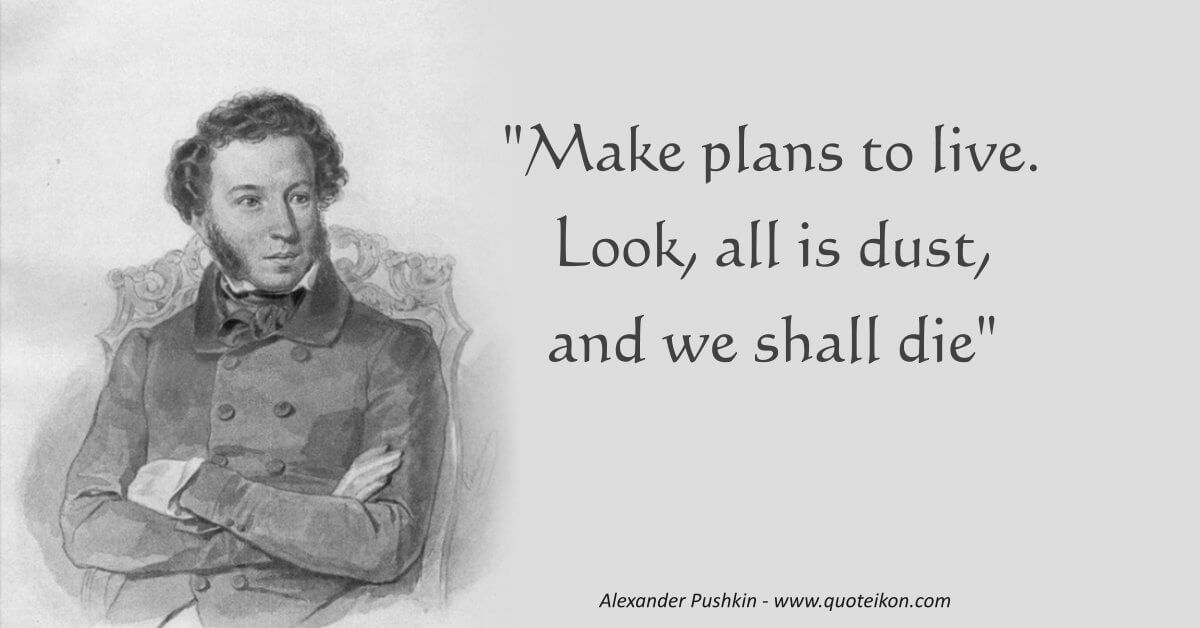