The wind was biting hard on a bitterly cold Salzburg evening. It was Tuesday 27th January 1756 and a musical genius was born to this world in a third floor apartment at 9 Getreidegasse. At 10am the following day he was whisked off to Salzburg Cathedral to receive his holy baptism into Christendom. His name was Wolfgang Amadeus Mozart, the infant prodigy whose untethered genius would bequeath to the world a grand tapestry of musical art.

Wolfgang Amadeus Mozart was gifted with a clinical ear for absorbing music which his father Leopold recognised and encouraged from an early age. Leopold was amazed at Wolfgang's ability to pick a note out as he started playing the piano at three years old. Little Wolfgang showed the same prowess with the violin, only without any tutelage. He was composing his own music by the time he was five.

Leopold took his child prodigy on gruelling musical tours of Europe in the hope of securing him a position as a musician in one of the royal courts. The roads were unpaved and the journeys long and arduous. The carriages were freezing in the winter whilst sweltering in the summer. Many historians speculate that these tortuous years on the road contributed to Mozart's ill health in later life and caused his early demise at the young age of 35.

But Leopold, who himself was a trained musician, recognised the brilliance in young Wolfgang. He had to reveal this child prodigy to the world. He concluded there is no point in having the talent if it cannot be exposed to critical acclaim. His father took great financial risks with this strategy. But ultimately, deep down, he believed in his son's talent. He knew young Mozart's destiny was far greater than Salzburg could ever offer.

What was it that Leopold saw in Wolfgang that convinced him to sacrifice his own career to concentrate solely on master Mozart?

It was not just young Wolfgang's prowess at the piano, he also had an inventive musical mind that could create amazing music. To top all of this was his incredible ear for sound.

Mozart only had to listen to a piece of music once and he could memorise it, write it and play it exactly. This proved much to the chagrin of the Papacy whose prized musical possession was Gregorio Allegri's "Miserere" that had never been played outside the walls of the Vatican.

Mozart witnessed just two performances of "Miserere" in the Sistine Chapel and proceeded to write the music from memory and become the first person to perform this work outside of the holy city.

Young Wolfgang received a cosmopolitan upbringing immersed in the universal language of music played out in the imperial courts of the continent. He felt the fabric of a pan-European culture and developed the tongue of a polyglot.

Royalty waited with bated breath to witness the child prodigy of Salzburg. Wolfgang performed for Empress Maria Theresa in Vienna, King George III in London and Queen Marie Leczinska in Versailles. Before his sixteenth birthday he had visited more than 200 towns and cities where the great and the good all marvelled at the boy wonder.

He and his family had gained a wealth of experience but this did not equate to a wealth in monetary terms they could spend. Bills still had to be settled and expenses had to be paid. The need to earn money was a spectre that would haunt Mozart for the rest of his life.

After finishing a tour of Italy, Wolfgang and Leopold returned to Salzburg. Mozart was now seventeen and in need of employment. The Archbishop of Salzburg employed him as a court musician. This allowed the teenager to hone his talent and continue composing.

Mozart grew disillusioned with Salzburg and resigned his position in 1777. He headed for Paris, Munich and Mannheim in search of an opportunity more in line with his musical ambitions. He received some offers, but declined them all and returned to Salzburg in 1779 and took up a post as court organist and concertmaster.

It was a relief for Mozart. Historically musicians had ties to the church or the royal court, there were few alternatives than these for musicians to earn money. But Mozart set his heart on an independent career free from interference from the church or the crown.

By the end of 1781 Mozart had established himself as the best pianist in Vienna. His decision to go solo was going well. His opera "Die Entführung aus dem Serail" was received well by audiences the following year and everything was fitting nicely into place, even his love life was to take a turn for the good.

A few years earlier Mozart had courted a singer called Aloysia Weber, but the relationship fizzled out. The Weber family were now living in Vienna and Aloysia was by now happily married. Alosyia also had three sisters and the roving eye of Amadeus had set its gaze on the younger sibling, Constanze Weber.

It was a rocky courtship but they ultimately married on 4th August 1782 at Saint Stephen's Cathedral in Vienna. The marriage bore them six children but only two of them survived into adulthood; Karl Thomas, who was the second born and Franz Xaver who was the last born.

Mozart immersed himself in his work. He studied the baroque style so melodically mastered by Johann Sebastian Bach and George Frideric Handel. He also drew inspiration from Joseph Haydn who became a minor mentor to the talented Wolfgang.

Up until 1786, Mozart had been concentrating on writing concertos and his solo piano performances. Now he diverted his attention back to opera and his famous collaboration with Lorenzo Da Ponte saw "The Marriage of Figaro" premiere in Vienna. One year later in 1787, there was another successful opera "Don Giovanni" which premiered in Prague before returning to be played in Vienna.

By the end of 1787 the Emperor Joseph II appointed Mozart to the position of "Imperial Chamber Composer". This was more of a prestigious post than a financially rewarding one. Although the meagre salary did help Wolfgang towards the end of the decade when the Austro-Turkish war diminished the ability of the aristocracy to support the Vienna music scene.

Mozart was a prolific composer during his life that was cut short due to illness. Before his thirteenth birthday he had written three operas, six symphonies and scores of other works. Before his eighteenth birthday the number of symphonies he had produced had risen to thirty. By the time of his death he was responsible for producing more than six-hundred works.

As is the case with many of the greatest artists Mozart was not properly appreciated until after his death when a renaissance of his music saw him rise in popularity. In todays world it seems unfathomable that Mozart spent most of his life in poor monetary wealth despite the wealth of talent at his disposal. Just putting bread on the table had proved a constant struggle.

It is this paradox that has made Mozart such an interesting historical character. He has inspired not just music and operas but literature, plays, video games and movies to be made in his honour.

His home town of Salzburg paid a wonderful tribute on the 27th January 2006, which was the 250th anniversary of his birth, when the bells of every church in the city rang out in unison at 8pm, the exact hour of his birth.

The influence of Amadeus continues to this day. With great admiration, all aspiring classical musicians follow in his intimate acoustic aesthetic known as the Salzburg sound.

The subtlely of his musical style was summed up by the eminent Swiss theologian Karl Barth who described it thus; "Mozart's music is free of all exaggeration, of all sharp breaks and contradictions. The sun shines but does not blind, does not burn or consume". Indeed it did. His was the ambrosia of melody that is the essence of music.

For all his posthumously appreciated talent he was, back in the day, good for a quick quip and one-liner, so this is my compilation of 20 of the best Wolfgang Amadeus Mozart quotes.

Fellow composer and friend Joseph Haydn was moved to say this to his father Leopold: "I tell you before God, and as an honest man, your son is the greatest composer known to me by person and repute, he has taste and what is more the greatest skill in composition"

Ludwig van Beethoven lavished high praise when he said: "I have always reckoned myself among the greatest admirers of Mozart, and shall do so till the day of my death"

The physicist Albert Einstein was inspired to say: "Mozart's influence transcends history. Each generation sees something different in his work. Mozart's music, which to so many of his contemporaries still seemed to have the brittleness of clay, has long since been transformed into gold gleaming in the light, though it has taken on the different luster of each new generation"

The theologian Karl Barth imagined his music in heaven: "It may be that when the angels go about their task praising God, they play only Bach. I am sure, however, that when they are together en famille they play Mozart"

The conductor George Szell simply said: "Listening to Mozart, we cannot think of any possible improvement"

The New York Mirror shared lavish posthumous praise: "Mozart was the Shakespeare of music; and as long as the immortal bard is read, Mozart will live in the admiration of mankind" 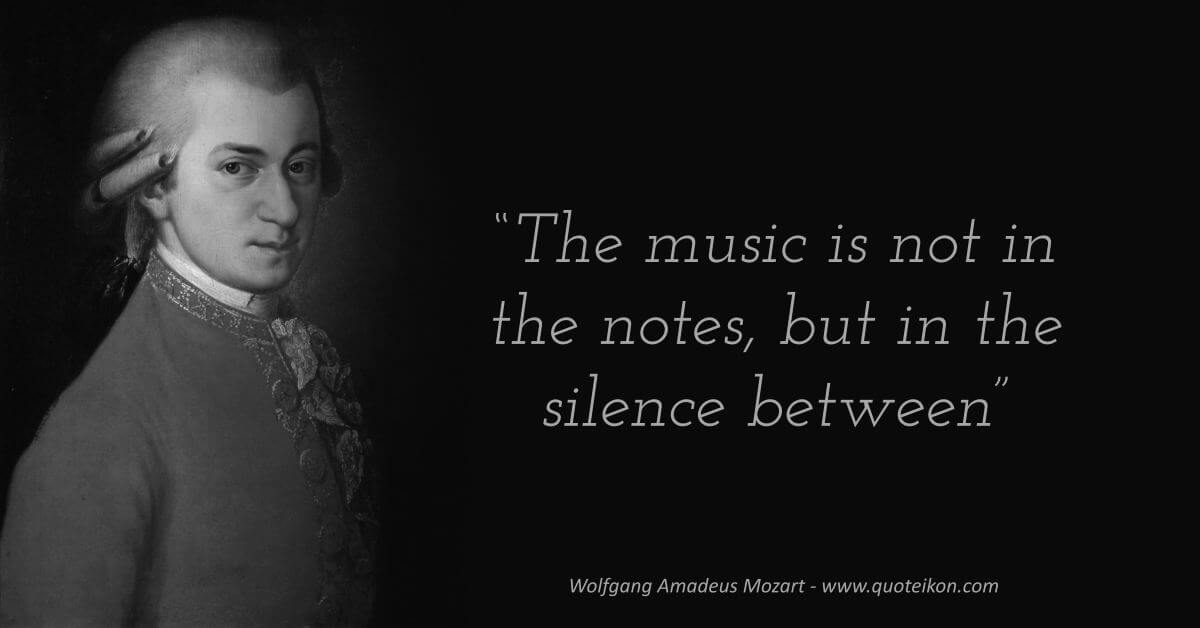