Leonardo da Vinci rose from an illegitimate birth to become renowned as a polymath who mastered many complex disciplines in a wide variety of subjects from science to sculpture, architecture to anatomy and engineering to mathematics to name but a few. He had the touch of a craftsman, the vision of an artist, the mind of a genius and the essence of a poet. During his lifetime he was more famous for his artistry, engineering and architectural design than the broad range of subjects that his talent had honed.

The inventive mind of da Vinci came up with prototypes on paper that were so advanced there was little practical use for them in his day. Many centuries would pass before his creative designs were recognised as forerunners for the helicopter, tank, bicycle, parachute and submarine.

Brilliance is often is recognised when it is replicated. Leonardo has been acknowledged as creating two of the most copied paintings in the history of art. Prints based on the "Mona Lisa" and "The Last Supper" have been subject to centuries of replication and graced the internal walls of millions of dwellings across the globe.

The Mona Lisa is an oil painting on a wooden panel which Leonardo created between 1503 and 1506. It is a portrait of the Florentine noblewoman Lisa del Giocondo who was a member of the prominent and historically important Gherardini family of Tuscany. In 1797 the Mona Lisa found a permanent home in the Louvre Museum in Paris where it has been on display ever since.

Leonardo da Vinci was born into the 15th century Italian Renaissance that was a period of great artistic influence. Towards the end of the 15th century the artistic output of painting, sculpture and architecture hit a peak that would last for just over a quarter of a century. This period would become known the Italian High Renaissance. This was a mini era of epic artistic mastery. Leonardo stood shoulder to shoulder with some of the greatest artisans of the day with Michelangelo, Raphael and Bramante all contributing iconic works of historical significance during this period.

Leonardo da Vinci raised the bar in the 1490's with his masterful depiction of "The Last Supper". An undoubted masterpiece, The Last Supper is a mural adorning a dining hall wall inside the monastery of Santa Maria delle Grazie in Milan. It was commissioned by a generous patron to Leonardo, Ludovico Sforza, the Duke of Milan.

Another famous da Vinci artwork is the Vitruvian Man which he described as the proportions of the human body according to the Roman architect Vitruvius. The Vitruvian Man has grown into a modern day cultural icon. It is often used to illustrate the paragon proportions of a healthy male body which is a stretch on da Vinci's studious look at bodily proportions and their relationship with architecture to give a symmetrically proportioned beautiful building.

Vituvian Man is an ink drawing on paper that is housed in the Gallerie dell'Accademia in Venice, Italy. As with all old paper drawings its exposure to light has to be limited so it rarely ventures out to be viewed by the public due to its fragile nature.

Fast forward 500 years and Leonardo da Vinci topped the bill of the million dollars painters club when his painting "Salvator Mundi" sold for a world record figure of US$ 450.3 million. The date was 15th of November 2017 and Christie's of New York was the auction house where Badr bin Abdullah Al Saud, the Saudi Arabian minister of culture, paid this mouth watering sum, the highest ever for a work of art.

Salvator Mundi is one of fifteen authenticated da Vinci paintings that have survived to this day. It is a Oil on walnut wood depiction of Jesus Christ clad in Renaissance dress whilst making the sign of the cross with his right hand and holding a transparent crystal orb in his left hand.

The influence of Leonardo da Vinci has spanned centuries with every subsequent generation equally astounded at the gift of brilliance bestowed on this Italian genius.

The Swiss artist Henry Fuseli spoke glowingly in 1801 when he was quoted as saying: "Such was the dawn of modern art, when Leonardo da Vinci broke forth with a splendour that distanced former excellence: made up of all the elements that constitute the essence of genius". The eminent French historian Hippolyte Taine was moved to say in 1866: "There may not be in the world an example of another genius so universal, so incapable of fulfilment, so full of yearning for the infinite, so naturally refined, so far ahead of his own century and the following centuries".

I could fill a whole page with glowing adjectives describing the erudite wisdom that flowed from the mind of da Vinci. But action speaks louder than words. You only have to look at the actions of the French king Francis I who lured him to Amboise in France by rewarding him with a Château and a budget which gave him the freedom to create art and inventions at his leisure. The da Vinci ability to visualise things was a key aspect of his imaginative precocity. He believed that knowing how to look at things was the key piece in the jigsaw of inventiveness.

Leonardo looked upon science, art and mathematics as the academic equivalent of a ménage à trois marriage made in heaven rather than three subjects occupying three separated shelves of the mind. The saying "hidden in plain sight" affects most people as they tend to look at everything from their own perspective which invariably masks the potential opportunities available. When the demarcation lines between different disciplines are removed, it opens up a broader perspective to look at things.

During his life time he recorded a compilation of 13,000 pages of notes and drawings that blend art, science, nature and philosophy into a fusion of creative thought that is known today as the da Vinci codices.

His manuscripts or codices, were written in his version of shorthand using mirrored writing which was a practice he mastered. It is thought that it helped to maintain his concentration and keep his focus clearly on his rigorous attention to minute detail. Leonardo was left handed also, which meant that mirrored writing from right to left would not smudge the ink he had just written. It took the mind of a genius to solve the age old ink smudging issues faced by the southpaw writer.

It was not just coded manuscripts he has given us because he was great for a one liner also, so here is my compilation of 21 of the best Leonardo da Vinci quotes.

The Austrian physicist Fritjof Capra saw past the brush strokes: "For Leonardo, painting is both an art and a science"

The author Edward MacCurdy studied his mind: "What thinker has ever possessed the cosmic vision so insistently? He sought to establish the essential unity of structure of all living things, the earth an organism with veins and arteries, the body of a man a type of that of the world"

Biographer Walter Isaacson recognised the art across the educational disciplines: "You don’t get to paint the Mona Lisa unless you spend a lifetime appreciating the connections of patterns across from nature’s disciplines"

Eminent author Sherwin B. Nuland looked past his art as he said: "The more the manuscripts of Leonardo are studied, the more one begins to see him not so much as a transcendent artist, but primarily as a man of science, whose skills and commissions as an artist and engineer enabled him to support his fascination with nature" 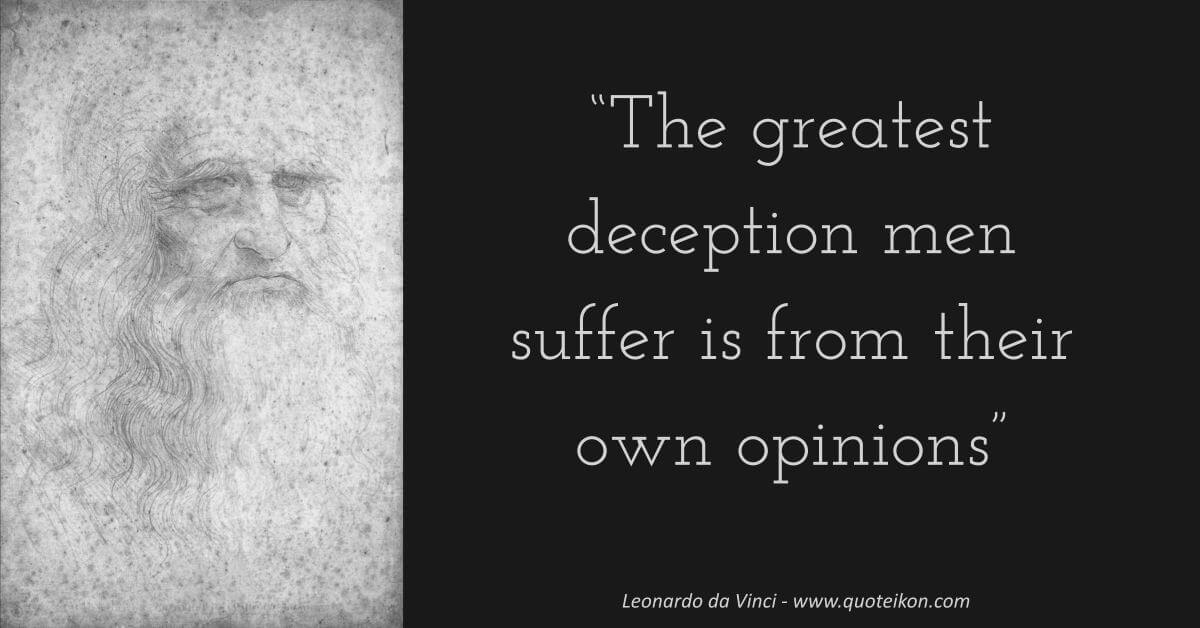