Nero is renowned as one of the bad boys amongst Roman emperors who garnered a ruthless reputation as a remorseless ruler prepared to go as far as committing matricide and executing a troublesome ex-wife to name but two of his foul deeds. But when viewed alongside his emperor peers he really wasn't such a bad egg as plots, schemes and general skulduggery seemed part and parcel of a rulers daily lot in the hot seat of the Roman Empire.

It seemed a common trait for all emperors was to imprison, exile, castrate or execute those who criticised them. The second emperor Tiberius was an accomplished general, sexual predator and paedophile but a poor ruler who allowed others to run the country in his name whilst he lived out his fantasies on the Isle of Capri. Tiberius was responsible for the culling of potential rivals including most of the family of Caligula whom he spared because he was deemed to young to kill, Tiberius adopted and then corrupted Caligula who went on the become the third emperor of Rome. Caligula was an avaricious ruler with plenty of blood on his hands who had a fetish for rape, incest and brothels. He declared himself to be a "living god" and constantly instilled fear into his people with this oft repeated quote: "remember that I have the right to do anything to anybody". Considering both these emperors were uncles to Nero and his own mother Agrippina (the younger) was equally as loathsome it is hardly surprising that Nero learned quickly that in order to survive he must be ruthless and execute all potential rivals before they assassinated him, and crucially that he literally had the power to do anything he wanted.

When Nero was four years old his father died so he was brought up under the watchful eye of his manipulative mother Agrippina who engineered the opportunity for Nero to become emperor by marrying the incumbent ruler Claudius who was later to die in unfortunate circumstances after munching on poisonous mushrooms, by the time of her husbands demise Agrippina had conveniently persuaded Claudius to adopt Nero placing him in next in line to become emperor. It was a power play executed with perfect precision as Agrippina had positioned her own people inside key posts in the Praetorian guard and so smoothing the path for Nero whose only contender was the legitimate son of Claudius, Britannicus who had been sidelined as a non contender by the scheming Agrippina.

Nero was 16 years old on sitting on the throne of the largest empire the world had ever known and with his megalomaniacal mother by his side they proceeded to rule the empire with mommy determined to pull the strings. Nero also had the sage advice of Burrus and the philosopher Seneca whom he listened to and learned from and slowly a power play ensued between Agrippina and the advisors.

Nero's reign started well, he was a reformer who taxed the wealthy to help the poorer classes much to the angst of the senate. Nero began to heed his advisors and slowly started to distance himself from his mothers influence, this led to a smooth entry into government as his first five years were considered his most successful.

History is a hard master to ignore and Nero looked to the past to secure his future, he had Britannicus poisoned as he was a rival who could plot against him and by 59 AD he even went as far as having his own mother killed. This was all about survival and staying in control, once power was consolidated it was time for pleasure. Nero was married to Octavia who he divorced and had her executed so he could marry his mistress Poppaea. Nero also had a soft spot for a slave boy called Sporus who he castrated and married. There were others, but Nero's main passion was not in the fleshpots of Roman debauchery, it was in the arts.

Nero loved nothing more than reciting poetry and singing much to the consternation of the senate who viewed these as practices for the commoners to revel in and hardly becoming of an emperor. Undaunted, Nero pursued his passion by performing in theatres where the Roman guards would threaten the audience to show their appreciation with rapturous applause. He believed he was the greatest ever performer and as his ego grew his passion for politics diminished, he lost his grasp of the political direction his administration was taking and more importantly the revenue it was spending.

Nero is often accused of playing a musical instrument while the great fire of Rome raged for one week and devastated large swathes of the city, he is also accused of deliberately starting the fire so as to profit from it. When the fire started Nero was not even in Rome and when he returned he personally took it upon himself to spend days sifting through the rubble looking for survivors. The historian Tacitus wrote of Nero providing food and shelter to the homeless, he even opened up parts of his palace for them to stay. Nero was active in the rebuilding offering incentives to tradesmen to expedite the reconstruction of the city and he was behind creating and implementing new fire safety codes. The fire also gave Nero the opportunity to design and build his ambitious Golden House or Domus Aurea that would cover in excess of 100 acres of city land.

Because his Golden House was so lavish it gave his enemies a reason to spread rumours that the emperor needed to destroy the city to acquire the land for his new palace, Nero just acted like emperors do and found a scapegoat in the Christians, who were despised anyway, and he blamed them for starting the fire which led to some persecution.

The rebuilding programme was expensive and it came at a time of unrest in the empire. There was a costly war in the east that secured Armenia while there were uprisings by Boudica in Britain and a Jewish revolt in Judea. Financial turmoil leads to unrest and the Roman statesman Gaius Calpurnius Piso was found conspiring to overthrow the emperor in 65 AD and in 68 AD a more serious threat came from the Gallic and Spanish legions who gained support from the Praetorian Guards who were the elite army unit assigned to protect the emperor. Nero fled Rome and upon hearing the senate made him an enemy of the state committed suicide rather than face the painful consequences of a slow torturous death at the hands of the senators that despised him.

The demise of Nero left a power vacuum that caused a long period of destabilisation for the empire. Many looked back and regretted the ousting of Nero who was a popular emperor much liked by the masses whilst disliked by the higher classes who felt the burden of increased taxation.

Nero's ambitions lay in the arts rather than the affairs of state, he defeated all his enemies except for one, his ego. It was his desire for adulation that brought about his downfall, he revelled in his adoring public and had grandiose plans for a sumptuous palace the state coffers could ill afford in an era where even a successful emperor could be assassinated for political gain. For all his excesses, which for the most part were Machiavellian in nature, he meant well for the people and he has left us some words of wisdom which I have compiled into this list of 22 of the best Nero quotes.

Adolf Hitler looked to history to confirm his belief: "I'm sure that Nero didn't set fire to Rome. It was the Christian-Bolsheviks who did that, just as the Commune set fire to Paris in 1871 and the Communists set fire to the Reichstag in 1932"

Napoleon Bonaparte shared this observation: "The people love Nero. He inspires in them both affection and respect. There is a reason for this which Tacitus omits. One can discern the reason for this popular feeling: Nero oppressed the great and never burdened the ordinary people. But Tacitus says nothing of this. He speaks of crimes. He speaks of them with passion. We, as a result, feel he is biased; he no longer inspires the same confidence. One is led to believe that he exaggerates; he explains nothing and appears satisfied with vignettes"

Mark Twain made this comparison: "Our Bible reveals to us the character of our god with minute and remorseless exactness... It is perhaps the most damnatory biography that exists in print anywhere. It makes Nero an angel of light and leading by contrast"

Bertrand Russell spoke of bleak moments in time: "After ages during which the earth produced harmless trilobites and butterflies, evolution progressed to the point at which it generated Neros, Genghis Khans, and Hitlers. This, however, is a passing nightmare; in time the earth will become again incapable of supporting life, and peace will return"

His father Gnaeus Domitius Ahenobarbus admitted: "Nothing that was not abominable and a public bane could be born of Agrippina and himself"

Tacitus alluded to his inability to write his own speeches: "Nero was the first emperor who needed another man's eloquence"

Suetonius gave this assessment: "But above all he was carried away by a craze for popularity and he was jealous of all who in any way stirred the feeling of the mob. It was the general belief that after his victories on the stage he would at the next lustrum have competed with the athletes at Olympia ... Since he was acclaimed as the equal of Apollo in music and of the Sun in driving a chariot, he had planned to emulate the exploits of Hercules as well"

Pliny the Elder infamously labelled him: "the fiery destruction of the human race"

Tertullian spoke of the woe of the Christians: "We read the lives of the Cæsars: At Rome Nero was the first who stained with blood the rising faith"

The historian Josephus spoke of a murky history: "But I omit any further discourse about these affairs; for there have been a great many who have composed the history of Nero; some of which have departed from the truth of facts out of favour, as having received benefits from him; while others, out of hatred to him, and the great ill-will which they bore him, have so impudently raved against him with their lies, that they justly deserve to be condemned. Nor do I wonder at such as have told lies of Nero, since they have not in their writings preserved the truth of history as to those facts that were earlier than his time, even when the actors could have no way incurred their hatred, since those writers lived a long time after them" 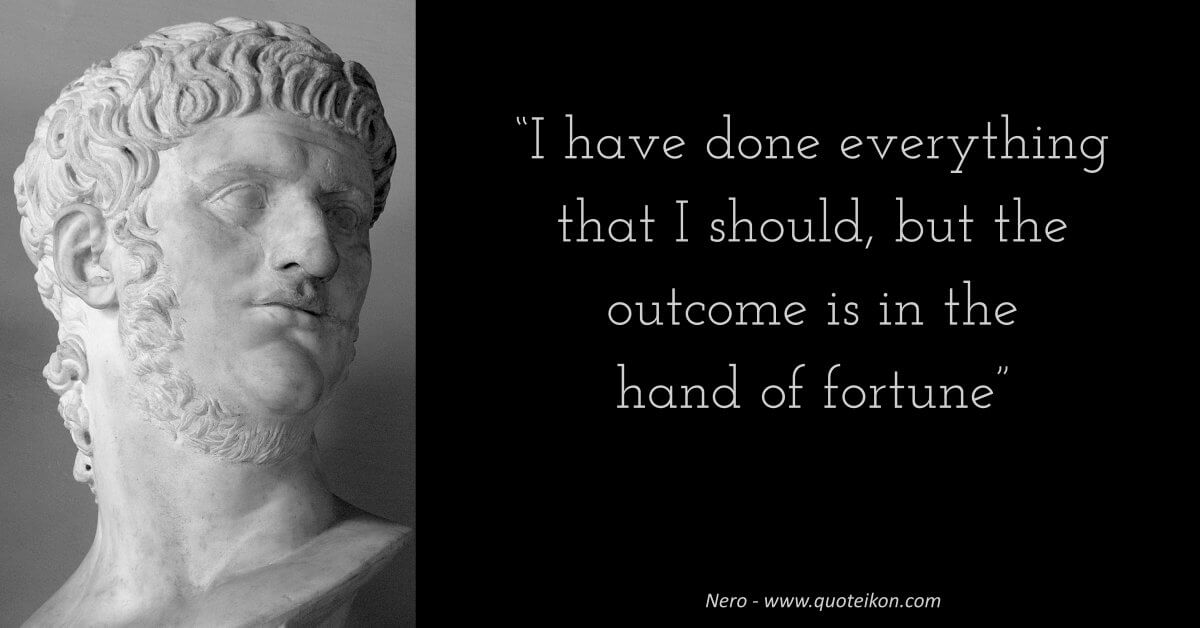