He was the renowned Roman rhetorician. An esteemed author and a philosophical playwright who advised emperors, senators and generals. As a moral thinker he championed the cause of stoic philosophy. But, try as he might, failed to live to the letter of his learned logic. His name was Seneca. The tactfully tongued transcendentalist troubled by treading the tightrope of thralldom to a tyrant.

The full brilliance of Seneca was rarely unleashed from the shadows of fear that all prominent public servants faced in the early days of the Roman empire. He needed all his oratory and diplomacy skills to circumnavigate the fragility of office in an ever-changing political landscape under the rule of five different emperors during his life time.

He was born in Corduba (now Spain) but educated in law in Rome. Seneca began his political career under the emperor Tiberius where he worked as a financial record keeper. It was under the rule of Caligula that the elegant tongue of Seneca rose through the ranks to become a senator.

He soon learned that being a senator was more a bed of thorns rather than roses. Caligula was unimpressed by Senaca's successes in the senate and ordered him to commit suicide. In a rare moment of compassion Caligula retracted the death sentence when he learned that the senator was seriously ill and knocking on deaths door already.

Remarkably, Seneca survived his illness and outlived Caligula due to the unfortunate 41AD assassination of the emperor courtesy of the blade of his own Praetorian Guards.

The next incumbent of the Roman hot-seat was emperor Claudius. You had to expect the unexpected in the upper echelons of Roman society and Seneca quickly found himself facing trumped up charges of adultery with Julia Livilla who was the younger sister of the now deceased Caligula. The senate handed down a death sentence which Claudius commuted to exile on the island of Corsica.

Seneca continued his writing in Corsica and lived in hope of a recall to Rome. Things changed in 49AD when the scheming Agrippina married her uncle and current emperor Claudius. Agrippina had a son called Nero whom she was grooming for the role of emperor. She wanted the best possible education for her son so her feminine charms soon softened her husbands harsh stance towards Seneca so Claudius had him recalled to Rome to educate the young boy.

Seneca went about his task of sowing the seeds of stoicism into the fertile mind of Nero. Moulding the young protégé into a more morally sound individual than his patrician peers was a challenge he readily accepted. Nero was under the tutelage of Seneca for six years until the political landscape was shaken by the untimely death of the emperor Claudius.

The demise of Claudius has been pondered upon by scores of historians. The general consensus, although unproven, was that he was poisoned by Agrippina who had already sidelined his son, Britannicus, in favour of Nero to become his succeeding emperor. Roman plots are notoriously cunning for good reason, Aggrippina was not the only one, there were thousands of other equally despicable characters all desperate to climb the slippery pole of power.

The patrician class of Romans indulged in a life style of unprincipled blue-blooded skulduggery that invariably led to murder or political assassination that was a bitter pill for a principled philosopher to swallow. Nero was still an impressionable teenager when he ascended to the throne of emperor of Rome. Seneca was retained in his service and was elevated to a position of influence in the sphere of Roman politics.

Seneca, along with Burrus who was a prefect of the Praetorian Guard, became the imperial advisors to Nero, much to the disdain of Agrippina who believed she should control her son's decision making.

The early years of Nero's reign were successful because the combination of Senaca and Burrus maintained a stable and equitable administration. During this period Seneca amassed a personal fortune, largely due to the liberal generosity of Nero who liked to reward his advisors for their successes. As the political wheel turns it always draws jealousy and criticism from the elite of society. Seneca was accused by the senator Suillius of corruption and was forced to defend his position.

Suillius, who was previously a favoured servant of Claudius, should have known better than to attempt to take down Seneca. Suillius lost half his estate and ended up in exile.

As Nero grew in confidence, so did his love of power. The influence of Seneca was waning. Perceived as a potential threat, Nero had Britannicus killed in 55AD. By 59AD it was the turn of his mother to die by the blade of an assassin. On both occasions Seneca was helpless to change the mind of Nero who simply tasked him with draughting the letter of explanation to the senate.

Much of the criticism aimed at Seneca revolves around pitting his philosophy against the wealth he accumulated and condoning the excesses of Nero. The stain of blood was certainly on the coin he accumulated but he never stopped trying to guide Nero to be a sage of stoicism. That the emperor eventually stopped listening to his words of wisdom does not mean he did not continue to try.

Seneca was acutely aware of the fragility of his position. Indeed, understanding the precarious nature of a prominent Roman public servant is key to empathising with Seneca. Every emperor since Augustus bathed their hands in the blood of senators and prominent people. Seneca was a veteran who had already survived two death sentences.

It is in his letters, most notably to his good friend Lucilius, that an outpouring of philosophical pain is revealed. The high stakes balancing act of his own collaboration in Nero's excesses with his guidance to keep the emperor in check was stretched to the limit of imperial tolerance. Press harder and lose his life or play along and implement a damage limitation policy on the volatile young emperor.

Seneca chose the latter and many historians judged him as a hypocrite as opposed to one of the most influential philosophers of the Roman era. Nero without the sage advice of Seneca would have unleashed the full extent of Agrippina's lust for power whereby the blood-letting and decision making would have been dramatically worse.

Seneca sensed his waning influence over Nero and twice requested permission to retire from public life. Nero twice denied him this. Seneca became less involved in politics and went into a self-imposed semi-retirement.

Even though he was away from the political spotlight with no ambitions to further his career, Seneca was, unbeknown to him, dragged into a plot to assassinate Nero. The emperor ordered his former teacher to commit suicide. Without any fuss, Seneca wrote his final letters, slashed his wrists and took poison. He faced death as he did life as a true stoic.

His was the voice of reason in a wilderness of patrician greed for power. In life and in death he gave meaning to the values of stoicism. His imparted philosophical knowledge has been passed down through the centuries and is still relevant to this day. He stealthily navigated a pernicious political landscape and inspired me to publish this list of 55 of the best Seneca quotes.

The philosophy professor Massimo Pigliucci described him as: "a towering and controversial figure of antiquity"

The classicist E. F. Watling was impressed to say: "a sage admired and venerated as an oracle of moral, even of Christian edification; a master of literary style and a model [for] dramatic art"

The philosophy lecturer John Sellars talked of this aspect of his outlook: "In Seneca in particular there’s a strong focus on how to cope with adversity, in part because he went through quite a lot himself, and he wrote letters of consolation and how to deal with bereavement"

The author F. A. Lepper shared this hypothesis: "It is not impossible that in 54 Seneca consciously set out to convince the philosophizing politicians in the Senate that the young Nero had the makings of an Optimus Princeps and would develop into a man of firm principles under his continuing tuition. It is also possible he made some progress with the difficult task of instilling the necessary zeal into Nero himself"

His mother Agrippina, responding to an astrologers premonition about the means of her death courtesy of her son simply exclaimed: "Let him kill me, provided he becomes emperor"

The stoic author John Sandbach offered this critique on De Beneficiis by Seneca: "The work lacks structure, even within a single paragraph Seneca leaps from one thought to another; indeed in search of epigrams he sometimes transcends thought"

The philosopher Michel de Montaigne was inspired to say: "Seneca's virtue shows forth so live and vigorous in his writings, and the defense is so clear there against some of these imputations, as that of his wealth and excessive spending, that I would not believe any testimony to the contrary"

The author Miriam T. Griffin shared this observation: "De Beneficiis contains many signs of the authors self-consciousness about structure. He announces topics for the future, indicates when he has reached one of the divisions previously announced, and sometimes alludes back to previous topics he has treated"

Another author Robin Campbell pondered how the great man would view the modern worlds crop of sage's: "He would have denounced the opinion to which most philosophers, tacitly or otherwise, have come round in the last half-century, that it is no part of the business of philosophy to turn people into better persons, as tantamount to desertion or lèse-majesté"

The classical scholar Richard Mott Gummere summed him up thus: "He is refreshingly undogmatic" 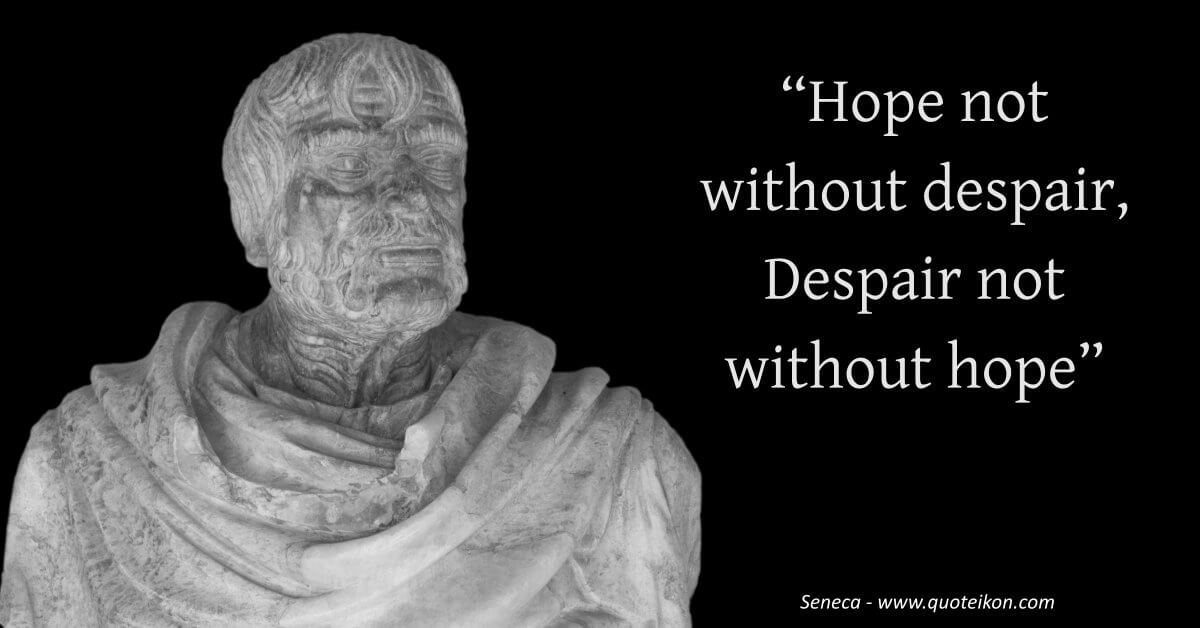