The Legacy of Tiberius, Failed Emperor or Misunderstood Authoritarian

Stepping into the shoes of Rome's first emperor was never going to be a walk in the park. So it came to pass, where Augustus was idolised Tiberius was despised.

Historical disdain towards Tiberius endures to this day. The victors, or those in power supposedly write history, but in the case of Tiberius the twisted pen of history was taken up by a section of Roman senatorial elite who were embittered by his rule. Needless to say, the opinions of historians like Suetonius were less than kind with their appraisal of the second emperors rule.

Before sitting on the emperor's throne, Tiberius was a military man. He was a brilliant general who scored many battlefield victories across many terrains from the mountainous Raetia in the Alpine region to Illyria on the Balkan Peninsula and across the Danube to defeat the mighty Marcomanni in an area that would later be known as Bohemia.

Great military minds make great leaders on the battlefield, but, this does not always make them great leaders of empires. However, when assessing the rule of Tiberius, his succession to Augustus was challenging from the off. There were rebellions to be quelled and mutinous legions to be assuaged. Tiberius successfully overcame these challenges which led to a period of calm in the Roman empire.

With Tiberius at the helm, Romans enjoyed an era of peace and prosperity. Tiberius understood very clearly the devastation of war and avoided needless conflict for the betterment of the Roman state and its people. Fiscally astute, Rome was in safe hands and many benefitted.

However, his relationship with the senate was less than cordial which caused tension that was not easy to mediate as Tiberius quite publically labelled them as "Men made for slavery".

Being a good leader is admirable, but, sharing an honest opinion of elite people of influence is considered in politics to be naive. Of this, Tiberius was surely guilty, but did that make him a bad emperor? Amoral and pragmatically questionable yes but not definitively incompetent or financially imprudent.

When Tiberius bored of the Senate and the day to day machinations of state he escaped to his adored Isle of Capri. It was here where the pen of one eyed historians primed their focus to paint a less than sympathetic view of their emperor.

Yes, his personal demeanour could be cruel and malicious, but for matters of state his rule was for the most part proficient. The reality is Tiberius continued the good work of Augustus right up until his departure from Rome to rule through a proxy from the Isle of Capri.

During his self imposed exile to Capri in the Gulf of Naples, Tiberius trusted Sejanus to be his man in Rome and granted him the executive power to administer the state. From his position as the head of the Praetorian Guard, Sejanus enthusiastically embraced his sudden increase of authority and revelled in the broadening of his outreach of governance.

Power however, breeds ambition and blinds the senses with the allure of absolutism. The ego of Sejanus would pay for succumbing to this lure to power when his plot to seize control of the empire was revealed to Tiberius.

Retribution was swift. Sejanus, his family and associates all paid the ultimate price with their executions. The new dilemma for Tiberius was how to rule Rome whilst residing in Capri. Who could he trust? His instinct for survival led to a political paranoia with a haunted mind of conspiracy and a thirst for blood that could not be quenched.

Treason trials became the norm and woe-betide any elite who either upset Tiberius or were inadvertently accused of dissenting views.

When considering the body count of influential Romans and the debauched shenanigans on the Isle of Capri, it is little wonder that Tiberius got a bad press from the elite class that suffered from his rule. But, the empire actually prospered during his tenure. His task was to consolidate what the first emperor Augustus had started. If judged purely on this criteria Tiberius was a successful emperor.

The Tiberius legacy of empire was in fact much better than the books of history have afforded him. However, his legacy of decadence was unfortunately embraced by his Caesarian successors such as Caligula, Claudius and Nero who took delighted note and descended into deplorable debauched degenerates who revelled in saturnalian stimulations of flesh and blood.

The eminent Roman philosopher, Pliny the Elder spoke of a green fingered emperor: "Indeed, he was never without it; for he had raised beds made in frames upon wheels, by means of which the cucumbers were moved and exposed to the full heat of the sun; while, in winter, they were withdrawn, and placed under the protection of frames glazed with mirrorstone"

Pliny the Elder also labelled him as: "The gloomiest of men"

The author Aldous Huxley made this interesting comparison: "If Gods are made in the image of men, cosmogonies reflect the forms of terrestrial states. In an empire ruled absolutely by one man the notion of an universe under the control of a single God seemed obvious and reasonable.... The Christian God was a magnified and somewhat flattering portrait of Tiberius and Caligula"

The Roman historian Suetonius spoke of his obsessions: "However, he had a particular bent for mythology and carried his researches in it to such a ridiculous point that he would test professors of Greek literature – whose society, as I have already mentioned, he cultivated above all others – by asking them questions like: "Who was Hecuba's mother?" – "What name did Achilles assume when he was among the girls?" – "What song did the Sirens sing?""

The author Lionel Thomas Berguer shared this assessment: "To trace the conduct of Tiberius from his first appearance in history to his death, is as if we should begin with the last acts of Augustus, and read his story backwards to its commencement of the civil wars; each narration would then begin with honour, and conclude with infamy"

Berguer went on to say: "If Augustus had never attained empire, he would have had a most disgraceful page in history; on the other hand, had Tiberius died with Germanicus, he would have merited a very glorious one: it should seem therefore that he was by nature a better man than his predecessor"

The Roman senator, Tacitus, portrayed him as vengeful towards anyone associated with treasonable actions, regardless of complicity: "Executions were now a stimulus to his fury, and he ordered the death of all who were lying in prison under accusation of complicity with Sejanus. There lay, singly or in heaps, the unnumbered dead, of every age and sex, the illustrious with the obscure"

Tacitus then summed him up thus: "He was infamous for his cruelty, though he veiled his debaucheries, while he loved or feared Sejanus. Finally, he plunged into every wickedness and disgrace, when fear and shame being cast off, he simply indulged his own inclinations"

The historian Edward Togo Salmon was more reserved in his judgement: "In the whole twenty two years of Tiberius' reign, not more than fifty-two persons were accused of treason, of whom almost half escaped conviction, while the four innocent people to be condemned fell victims to the excessive zeal of the Senate, not to the emperor's tyranny"

A certain senator, Asinius Gallus, thought him too liberal: "Tiberius preserved silence, for he conceded to the Senate such phantoms of liberty" 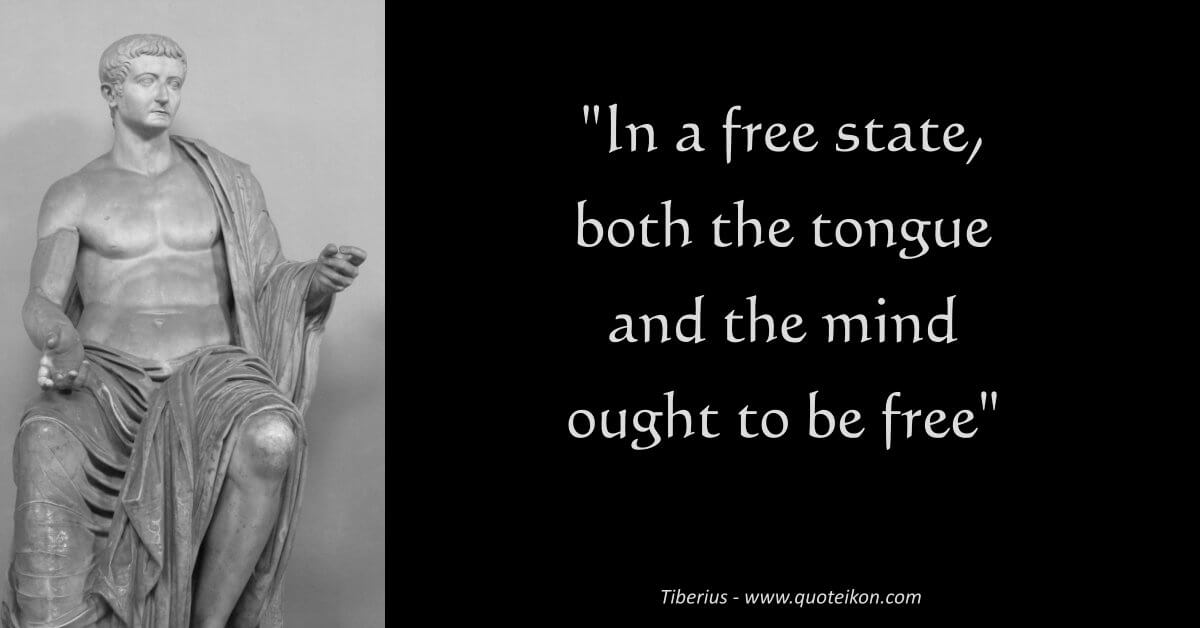