The post-WW2 manhunt for Martin Bormann was as intriguing as the Machiavellian bureaucratic machination he had woven to subtlety insinuate himself into a position of such influence that he actually outmanoeuvred all the pretenders to Hitler's throne to place himself in a position of power that most outside observers knew little of.

Bormann became the highest ranking official that the Allies could not confirm was dead or alive and so in the Nuremberg trials he was tried, convicted and sentenced to hang in absentia. This led to an unparalleled manhunt for the only conceivable man alive "who knew everything", because this was not an ordinary high ranking Nazi, he was the private secretary to Adolf Hitler who from 1941 to 1945 shared all the Fuhrer's intimate secrets and had a major influence on his decision making during this period of the war.

There were over 5,000 sightings in an array of differing countries including Switzerland, Ceylon, Morocco, Italy, Norway, Nepal, Brazil and Bolivia just to name a few. There was speculation he never left Germany and was regularly spotted in Bavaria donning a Tyrolean hat heartily downing stein's of beer.

The first real clues of his whereabouts appeared at Lehrter station in West Berlin in 1972 when the remains of two dead bodies were uncovered with one having evidence of glass ampule splinters between the teeth pointing to a suicide by cyanide capsule, and since it was only the Nazi party hierarchy who carried these capsules there was a high probability this was Bormann. It remained circumstantial evidence until in 1998 a DNA test was compared with Bormann's living relatives and it was proven without doubt this was the remains of Martin Bormann.

Martin Bormann, like many other men of his era, was a disillusioned citizen looking for answers, he found solace in antisemitism and joined the Nazi party where he displayed good organisational and bureaucratic skills. He worked his way up to become the Chief of Cabinet in the Office of the Deputy Fuhrer, Rudolf Hess from 1933 until 1941. Hess came to rely on Bormann for everything and it became obvious that Martin was excelling at his job as he slowly began to supervene upon Hess's duties to the point he became noticed by Hitler for his diligent application of duty.

In 1941, after Hess departed on an ill feted peace mission flying a Messerschmitt Bf 110 to Scotland, Martin Bormann had done enough to impress the Fuhrer that he had both the ability and loyalty to fill the shoes of his now discredited former boss and Hitler obliged by creating a new position of Chief of the Nazi Party Chancellery.

Bormann devoted his life to his duties which he carried out diligently and with so little fuss that the likes of Goring, Goebbels and Himmler all completely underestimated his Machiavellian cunning. He proved himself more adept at intrigue, more decisive in important moments and when combined with his ruthless pursuit of power through the type of bureaucracy the Fuhrer appreciated he had firmly planted himself in the position of influence all the hierarchy of Hitler's inner circle sought, he had total access to the ear of the Fuhrer and what is more, he controlled who else had access to converse with Hitler.

Bormann had gained extra responsibility and a new position of Private Secretary of the Führer and further to that he had learned how to communicate information to Hitler that would lead to the outcome he desired. All this was much to the frustration of leading figures in the third Reich and the military.

After 1943 Bormann ran the Nazi party and administered everything in Adolf Hitler's life, he even had control of the Fuhrer's finances, but more importantly he filtered out information sent to his office he thought unimportant to present to the leader of the Third Reich. Hitler once described Bormann as: "my most loyal Party comrade" much to the chagrin of the rest of the Nazi hierarchy

Bormann had become hated in most circles of political and military power within Germany but it was not until after the war that the Allies realised how much influence he actually wielded. Winston Churchill wanted all the Nazi leaders executed without a trial but Franklyn D. Roosevelt and Joseph Stalin wanted justice to be seen so the compromise was the Nuremberg trials which were little more than victors justice that exposed the hypocrisy of the Allies as many of the charges levelled at the Nazi's could easily have been made against the Soviets. Martin Bormann escaped the humiliation of facing Nuremberg justice in person because of his suicide during the chaos of the last days of the war in the streets of Berlin although they did find him guilty in his absence.

It may not be too hard to imagine but Bormann occupied a similar position under Hitler as Stalin did under Lenin, he had the same ruthless streak as Uncle Joe and he was also a master manipulator, so it would not be too far fetched to imagine him taking the reins of what would by then be a Nazi empire if Hitler had not been defeated, he was after all just as despised by his peers as Stalin was, but that never stopped the Georgian revolutionary taking power in the Soviet Union.

His inconspicuous rise to such lofty heights in the Nazi administration was masked by a quiet determination and cunning guile that few recognised as a subtle but effective power play being orchestrated behind the scenes. He was not a public facing official and made few public speeches but he is still remembered for a few good one liners, so this is my compilation of 12 of the best Martin Bormann quotes.

Adolf Hitler was quoted as saying: "Bormann's proposals are so exactly worked out that I need only say yes or no. With him, I dispatch in 10 minutes a pile of papers over which other men would take hours of my time"

Adolf Hitler once described Bormann thus: "I know he is brutal, but what he undertakes he will finish; I can count on that. With his ruthlessness and brutality he always sees that my orders are carried out"

The German Minister of Armaments and War Production Albert Speer talked of his rise to power: "He moved silently into the inner circle, planting trap doors for all more powerful rivals. After a few years, nobody got to the Führer except through Bormann's antechamber - not even ministers or field marshals"

Albert Speer went on to say: "He had succeeded in representing himself as insignificant while imperceptibly building up his bastions. Even among so many ruthless men, he stood out by his brutality and coarseness. He had no culture, which might have put some restraints on him, and in every case he carried out whatever Hitler had ordered or what he himself had gathered from Hitler's hints. A subordinate by nature, he treated his own subordinates as if he were dealing with cows and oxen"

Hitler's chauffeur Erich Kempka gave this assessment: "The most hated and dictatorial person in Hitler's immediate circle was Reichsleiter Martin Bormann. He had a cat-like, effusive show of friendliness when it suited his purposes, but when not being nice he was utterly brutal. His ruthlessness knew no bounds. His only known good point was his unbelievable work rate. One cannot talk about the fall of the Reich and the death of Hitler without a thorough understanding of the person who was the grey eminence in Hitler's personal circle... He had an excellent idea of how to make equals feel he was their friend and to have himself appreciated by his superiors. He worked almost day and night without a break and rightfully won the reputation of being a great workhorse"

The historian Louis L. Snyder shared this observation: "It was clear that Bormann, a master of the arts of intrigue and political infighting, was headed for lofty eminence in the Third Reich"

Louis L. Snyder added this: "He was, indeed, the power behind Hitler's throne. Under his unprepossessing exterior was the classic manipulator, the anonymous power seeker who worked in secrecy and outmaneuvered all his rivals seeking Hitler's ear"

The author William Stevenson summed up his surreptitious influence: "It was only when Bormann's disappearance became a matter for serious conjecture, and intelligence agents began to go into the ugly details, that an incredible episode in Hitler's life came to light. This explained exactly how Martin Bormann was able to gather into his hands all the strings required to make Hitler dance to his tune" 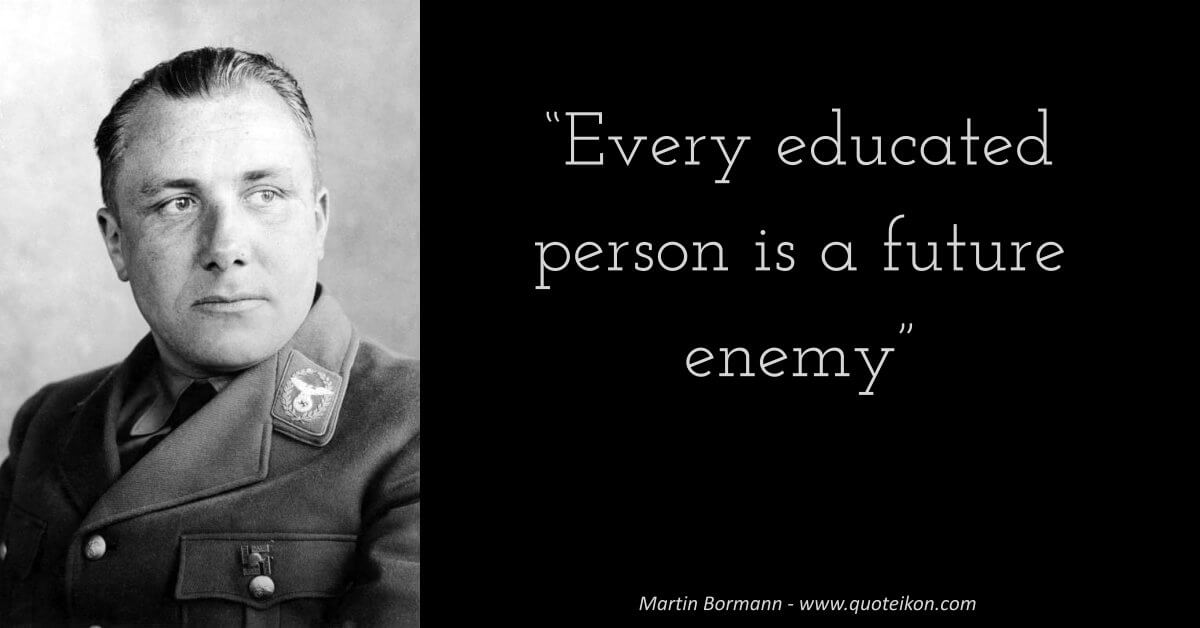