Joseph Goebbels was the master manipulator who rose through the Nazi party ranks to become the Reich Minister of Propaganda and Public Enlightenment where he relished his role of influence over the German people as the mouthpiece of Adolf Hitler's dictatorial rule.

In his childhood days Goebbels was an intelligent child and a more than capable student but he suffered from a deformity in his right leg caused by osteomyelitis that forced him to wear a metal brace that saw him suffer a limp for life and prevented him from joining the army during WW1.

Although disappointed about his disability he more than made up for it academically as he graduated from university with two degrees and an ambition to be a successful writer.

Goebbels applied for many journalistic positions but was turned down every time, embittered he tried his hand as a writer but his novel entitled "Michael" was not commercially successful.

An inferiority complex was building in tandem with his resentment for rejection and he was looking for an outlet to channel his frustrations in the early 1920's when Adolf Hitler's National Socialist Party emerged during a bleak period for the German people. The impressionable Joseph found the allure of antisemitism and a German first policy irresistible and by 1926 he pledged his total support for Adolf Hitler as he was quoted as saying: "Adolf Hitler, I love you because you are both great and simple at the same time. What one calls a genius".

Goebbels quickly put to work his skill as a master propagandist with a determination to prove himself as he led political campaign after campaign to a successful conclusion and in the process impressing Adolf Hitler who was quoted as saying: "Dr. Goebbels was gifted with the two things without which the situation in Berlin could not have been mastered: verbal facility and intellect.. . . For Dr. Goebbels, who had not found much in the way of a political organization when he started, had won Berlin in the truest sense of the word".

Goebbels became totally engrossed with the Fuhrer's charisma fuelled powerful rhetoric and he devoted his impressive intellect to delivering the party message until the Nazi's finally came to power in 1933 when he was rewarded with the position of Reich Minister of Propaganda and Public Enlightenment giving him total control over the entire media including radio, press, publishing, cinema, theatre and all the arts.

Goebbels' antisemitism became a theme as he began putting his stamp on German culture and as the Nazi grip on power increased so did his anti Jew rhetoric. His pro-party stance became more than entrenched as he encouraged the denunciation of all non German ethnic groups and targetted all potential political enemies with the same venom as he did the Jews.

Goebbels took a particular interest in the party's propaganda ministry's film-making division as he set more than tone for movie making as his casting couch developed a reputation as big as his ego and there was a queue of actresses willing to oblige to be given star roles. One affair in particular with the Czech actress Lida Baarova caused much chagrin to the party hierarchy and Goebbels was advised very strongly to end the relationship.

With the onset of WW2 his remit changed and he created movies and broadcasts to motivate the German people showcasing his morality deprived mind as he was prepared to use anything and everything to further the Nazi cause.

The initial successes of Germany's WW2 effort eventually subsided with some highly questionable military decisions culminating with the disastrous Operation Barbarossa that saw a land invasion of the Soviet Union that stretched the logistics lines and challenged the forces of nature that Joseph Stalin's Red Army were more suited to deal with.

The bloody war on the Eastern Front accounted for more lives than every other theatre of war in WW2, the Germans didn't take any prisoners in the assault on Soviet territory as more than 1,700 towns and 70,000 villages were razed to the ground in a hate filled campaign. When the tide turned and the Soviets were on the offensive the repercussions were just as blood thirsty and no German wanted to be captured by the Red Army.

For all of Goebbels pro-German propaganda the Soviet forces led by Georgy Zhukov were closing in on Berlin to the east whilst the Dwight D. Eisenhower led allies were closing from the west. Both Franklin D. Roosevelt and Winston Churchill had given the allies orders to capture the German hierarchy alive and Joseph Stalin had also ordered his generals to do likewise.

When it became clear all was lost Adolf Hitler and his newly wed wife Eva Braun took their own lives on 30th April 1945 with orders that Goebbels take command as Chancellor of the Third Reich. His hold on the reins of power was short lived as within 24 hours Goebbels also followed his leader by committing suicide rather than face the wrath of the Red Army. As a master manipulator of words he was also good for a one liner so this is my compilation of 21 of the best Joseph Goebbels quotes.

A German official called Hans Fritzsche made this statement in 1946: "Goebbels must have had a tremendous hatred for the Jews - but not more than Himmler. I have no doubt, at this date, that Goebbels knew of the murder of 5 million Jews, a fact which he kept hidden from me and others at that time"

The Supreme Commander of the Luftwaffe Hermann Göring seemed less than impressed with his fellow Nazi: "That clubfooted fanatic! He forced women to submit to him sexually because of his powerful position. He influenced Hitler to become anti-Semitic more than Hitler had been before. Hitler used to come to my house once in a while for a cup of coffee, and because I led a normal life, he would leave about nine o'clock. I was in the habit of retiring early. However, Hitler used to spend practically all of his nights, sometimes until four a.m., with Goebbels and his family. God knows what evil influence Goebbels had on him during those long visits"

The author Anthony Read described him thus: "Goebbels saw the ultimate enemy as international capitalism, and those who held power in Germany as its lackey, betraying their nation for personal gain. These were the traditional targets of the Communists, of course, so the Nazis and the KPD, the Communist Party of Germany, were in direct competition for the same constituency, two rabid dogs fighting for one bone… And Goebbels, who has so recently been happy to describe himself as a ‘German Communist’ led the fight with all the intensity of a religious convert"

The stormtrooper Horst Wessel shared this observation in the 1920's: "This man's rhetoric and ability to organise are unique. There was no situation he couldn’t deal with. The party members followed him with great love. The stormtroopers would have let themselves be hewn to pieces for him" 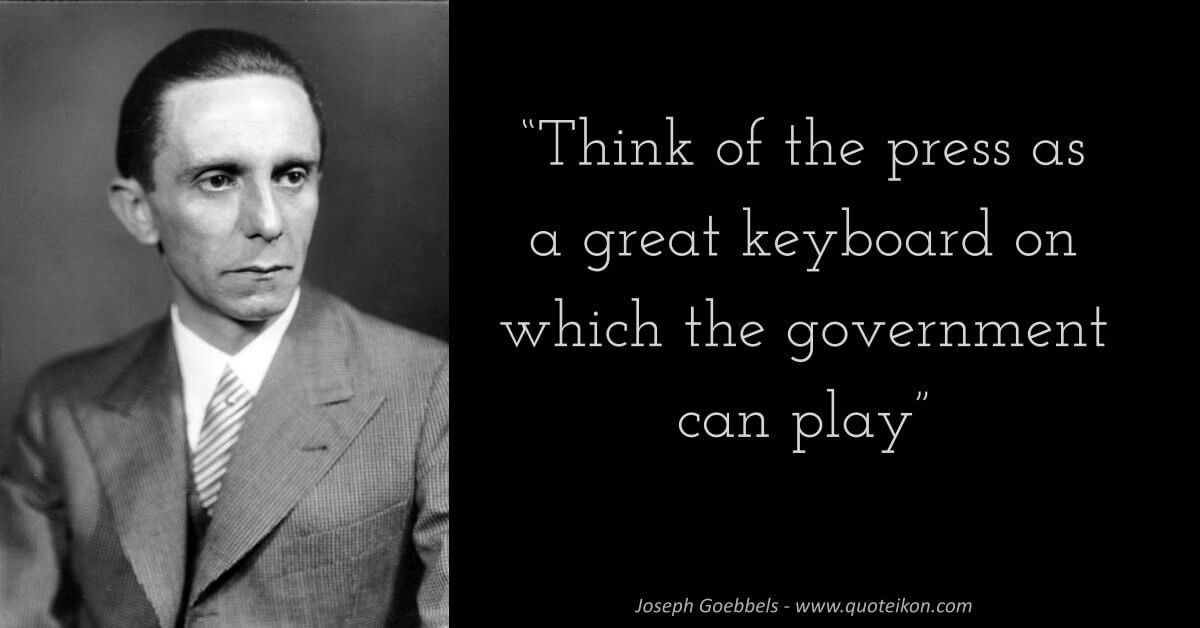