Hermann Göring grew up with a burning ambition to become a soldier and after graduation from the military academy at Berlin Lichterfelde in 1912 he enlisted with the Prince Wilhelm Regiment in the Prussian army. In WW1 he served at the front until he was hospitalised by "Trench Foot", during his recovery he decided to apply to join the Luftstreitkräfte ("air combat forces") of the German army and although he was initially denied entry, he eventually enlisted and completed his pilot's training course.

Göring fought with distinction with 22 recorded victories to his name he was awarded the Iron Crosses (1st and 2nd Class) as well as the prestigious Pour le Mérite in 1918. As WW1 drew to a close he Göring was in command of his own squadron and he received orders to give up their aircrafts to the enemy to which he point blank refused leading to many of his pilots scuttling their airplanes rather than surrender them to the Allies.

Embittered by what many German military men described as a needless capitulation by the civilian leadership who overthrew the monarchy of The Kaiser, Goring shared the resentment of his German brothers who fought gallantly but felt betrayed and this ill-feeling festered bubbling under the surface waiting for an outlet to release their pent up venom.

That outlet would arrive in the form of Adolf Hitler whose charismatic speeches tapped into the pent up frustration felt by many ex-WW1 service men who were only too eager to join his exciting brand of patriotic idealism.

Goring was quick to join the ranks of the Nazi party and involved himself in all matters to promote the party to the point where he was quite badly wounded during the 1923 Beer Hall Putsch which ended in failure.

Hermann was a loyal subject to Hitler all the way through the Nazi's rise to power and in 1933 when Hitler became Chancellor he rewarded him with a ministership in his government and Goring went about creating the Gestapo and after running it for one year he passed the reins to Heinrich Himmler.

Due to Goring's history with the air force in WW1 Hitler appointed him as commander-in-chief of the Luftwaffe and during the early days of WW2 he was given the rank of Reichsmarschall giving him control of all Germany's armed forces which made him the second most powerful man in Nazi Germany.

After the fall of France Göring was given the job of destroying the British RAF and the Battle Of Britain ensued in the skies of southern England. During the early skirmishes the RAF consistently repelled the Luftwaffe and as the Summer of 1940 drifted to Autumn it became clear to Goring that England was a far sterner opponent than what his Fuhrer was expecting. It was in August of 1940 that England's Prime Minister Winston Churchill gave his epic Battle Of Britain speech in the House Of Commons that included the immortal line: "Never in the field of human conflict was so much owed by so many to so few. All our hearts go out to the fighter pilots, whose brilliant actions we see with our own eyes day after day". It was a bitter pill for Goring but the English with their Spitfire fighter planes were superior to the Luftwaffe's attacks.

Hitler then went against the advice of Göring and many of his generals and decided to attack Joseph Stalin's Soviet Union instead, this was a decisive decision in WW2 and probably the biggest factor in the Nazi's losing the war. With the stretched logistics lines in the east and the harsh Russian winter Hitler was over reliant on Goring's Luftwaffe replenishing the army on the eastern front but this too became an impossible task much to the displeasure of the Fuhrer.

A dejected Göring found consolation in his plundered art as he immersed himself in looting Europe's artwork where he amassed a collection which amounted to over 1,500 pieces worth an estimated $200 million at 1940's prices.

Goring had gone from the man Hitler named as his natural successor to someone the Fuhrer felt he could no longer trust to 'get the job done', but in reality he had done all he could with the tools he had at his disposal. The war in Europe came to an inevitable end in May 1945 and Goring was captured by the Allies and put into a show trial as the highest ranking German official but Hermann gave an excellent account of himself by outwitting the prosecution on many occasions. He was the stand out personality of the Nuremberg trials as his dominant personality swayed proceedings but it was never going to be enough to escape the death sentence. However in a last act of defiance Göring committed suicide by chewing a cyanide capsule he had managed to hide from his captors and so he escaped the hangman's noose and the propaganda coup that the Allies had wanted.

Out of all the Nazi leadership he was perhaps the least radical and before the onset of WW2 he worked tirelessly trying to avoid conflict, he was however caught up in the Nazi machine and he probably kept quiet to avoid party conflict. He was a charismatic leader who was always good for a quick quip, so this is my compilation of 27 of the best Hermann Göring quotes.

Adolf Hitler was impressed to say: "I liked him. I made him the head of my SA. He is the only one of its heads that ran the SA properly. I gave him a dishevelled rabble. In a very short time he had organised a division of 11,000 men"

The author Edward Crankshaw shared this observation: "In Göring's tones there is just such a shadow. He is a complex villain if ever there was one. He also kept his bravery to the end and made a showing at Nuremberg which shamed his colleagues. He also kept his stubborn cunning, defeating the hangman"

The German WW2 Admiral Karl Dönitz gave this assessment: "I can't see a thing wrong with Göring's behavior as far as this trial is concerned. They have proven none of the charges. I have mentioned to Göring that the trouble with National Socialism is that it is a house divided, that we Germans tried to live in a community without considering our neighbors, and Göring agreed with me. So even Göring isn't as bad a fellow as the prosecution would have the world believe"

The German WW2 ace pilot Adolf Galland recalled this conversation: "Göring wanted to know if we had ever thought about this. "Jawohl, Herr Reichsmarschall!" He looked me straight in the eyes and said, "What would you think of an order to shoot down pilots who were bailing out? "I should regard it as murder, Herr Reichsmarschall", I told him, "I should do everything in my power to disobey such an order". "That is just the reply I had expected from you, Galland"."

The philosopher Eric Hoffer shared this hypothesis: "Had Hitler died in middle of the 1930's, Nazism would probably have shown, under the leadership of a Goering, a fundamental change in its course, and the Second World War might have been averted. Yet the sepulcher of Hitler, the founder of a Nazi religion, might perhaps have been a greater evil than all the atrocities, bloodshed and destruction of Hitler's war." 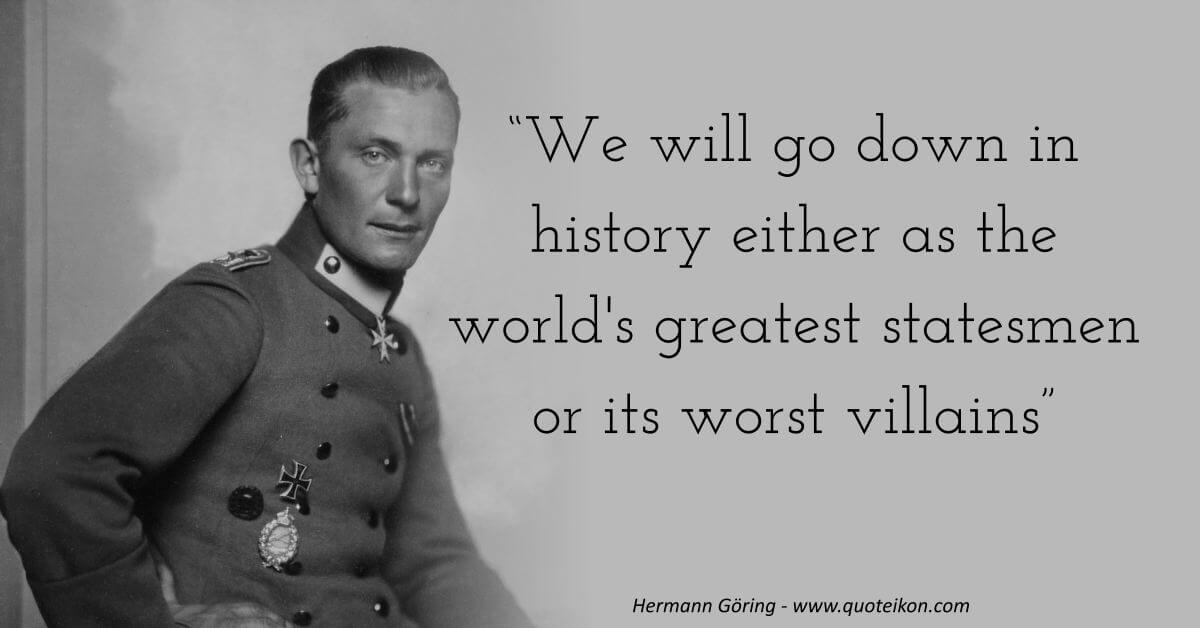