Out of all of Hitler's henchmen no one was more feared than Heinrich Himmler who in his position as SS Reichsführer could send a shiver down the spine of even the most partisan Nazi party members if they came under his scrutable stare.

This was the man whom Adolf Hitler thought quite mad but ultimately useful as a balance and check in a government that stopped having cabinet meetings after 1938. After joining the Nazi party in 1925 Himmler displayed antisemitic tendencies and extreme loyalty, which when combined with an opportunistic cunning quickly saw him rise up the ranks to become an SS leader by 1929.

Once Hitler first tasted power in 1933 he went about consolidating his position and he placed Himmler as chief of the Munich police where one of his first actions was to construct the first Nazi concentration camp at Dacau (just outside Munich). Dacau was where political prisoners were to be sent and by the time of its close at the end of WW2 it was responsible for the deaths of 36,000 people.

Having impressed the Nazi leadership Himmler was placed in charge of the SS in 1934 and it became an independent organisation answerable only to Hitler. Himmler wanted more power and by 1936 he was the sole commander of the entire German police force which was in effect a number of divisions under the purview of the Himmler controlled SS.

The power hungry Heinrich was now the SS Reichsführer and under the rationale of consolidating Germany's security he reconstructed the SS into an armed force composed only of those of superior Aryan blood with the racist ideals to match.

Himmler held a unique role with the protection of German and Aryan interests under the control of the mechanisms of his police state which meticulously followed every whim of their leader who had become the most feared man in Nazi Germany.

Himmler took to solving the Jewish issue with all the relish of a genocidal sadist as he unveiled his plans of accelerating the construction of concentration camps which were to be converted into extermination camps and his ultimate objective, the final solution.

The European jews paid the ultimate price costing six million lives, but the gypsies, Slav's, Russians and many more victims all suffered horrific deaths at the hands of Himmler's systematic killing machines.

Heinrich Himmler also had a mystical side to his character that saw him delving into the history of the Aryan race to find propaganda material to justify their supremacy. He was active in the Nazi hierarchy in securing pieces of art to be looted across occupied Europe but his tastes always had an historical significance. One such work of art was the 11th century Bayeux Tapestry celebrating the Norman victory over the English in 1066 and was hanging in the Louvre gallery in Paris. Just before the Allies captured Paris Himmler ordered his SS troops to steal the tapestry and bring it to his Wewelsburg castle in the German town of Büren, Westphalia. However the British had intercepted his order and tipped off French resistance who organised the safe keeping of the tapestry.

Himmler admired the Normans because they were descended from Aryan Vikings so he treasured owning the Bayeux Tapestry amongst other items he ordered the SS to steal from various museums and churches across Europe. He was also inspired by ancient symbolism which was incorporated into the SS where even the SS insignia was derived from ancient runes which signified elitism.

For all the power he held in the Third Reich the sands of time were turning against the Nazi war machine and recognising this Himmler desperately tried to negotiate an unauthorised peace treaty during the final days of WW2. Hitler found out and dishonourably removed him from all positions of power within the Nazi regime. By this time Heinrich was donning civilian clothes and wandering Northern Germany in an effort to hide from the Allies who were actively pursuing all the hierarchy of the Third Reich.

When discussing the final outcome of WW2 at Yalta in February 1945, the British Prime Minister Winston Churchill had proposed all Nazi leaders to be summarily executed without trial but both Franklin D Roosevelt and Joseph Stalin both opposed this notion and wanted public trials to garner propaganda value.

After the capture of Heinrich Himmler it became clear to him he would be interrogated and put in a public show trial at Nuremberg, so he bit down on a cyanide tablet he had hidden inside one of his teeth and committed suicide to deprive the Allies of a public humiliation before his ultimate execution.

As one of the most powerful men in the Nazi regime his every word was listened to for deeper meaning and he was good for a quick quip too, so this is my compilation of 20 of the best Heinrich Himmler quotes.

Rudolf Höss, who was for four years the Commandant of the Auschwitz concentration and extermination camp, was quoted at Nuremberg as saying: "In the summer of 1941, I was called to Berlin to see Himmler. I was given the order to erect extermination camps. I can almost give you Himmler's actual words, which were to the effect: "The Fuhrer has ordered the final solution to the Jewish problem. Those of us in the SS must execute these plans. This is a hard job, but if the act is not carried out at once, instead of us exterminating the Jews, the Jews will exterminate the Germans at a later date."

The German Heinz Guderian described him thus: "The most impenetrable of all Hitler's disciples was the National Leader of the SS, Heinrich Himmler. An inconspicuous man with all the marks of racial inferiority .... His racial doctrine was fallacious and led him to commit terrible crimes. His attempt to educate the German people in National-Socialism resulted only in concentration camps. As late as 1943, long after Stalingrad, he still believed that Russia should be colonised by Germans as far as the Urals. On one occasion, when I said to him that it was already impossible to find volunteer colonists for the east, he insisted that the land as far as the Urals must be Germanised by compulsory colonisation if necessary and by planting the land with German peasants conscripted for that purpose."

The German businessman Ernst Hanfstaengl shared this early assessment: "He had a pale, round, expressionless face, almost Mongolian, and a completely inoffensive air. Nor in his early years did I ever hear him advocate the race theories of what he was to become the most notorious executive."

Adolf Hitler was not so impressed by his search for an Aryan history of culture: "Himmler is starting to dig up these villages of mud huts and enthusing over every potsherd and stone axe he finds. All we prove by that is that we were still throwing stone hatchets and crouching around open fires when Greece and Rome had already reached the highest stage of culture. We really should do our best to keep quiet about this past. Instead Himmler makes a great fuss about it all. The present-day Romans must be having a laugh at these revelations." 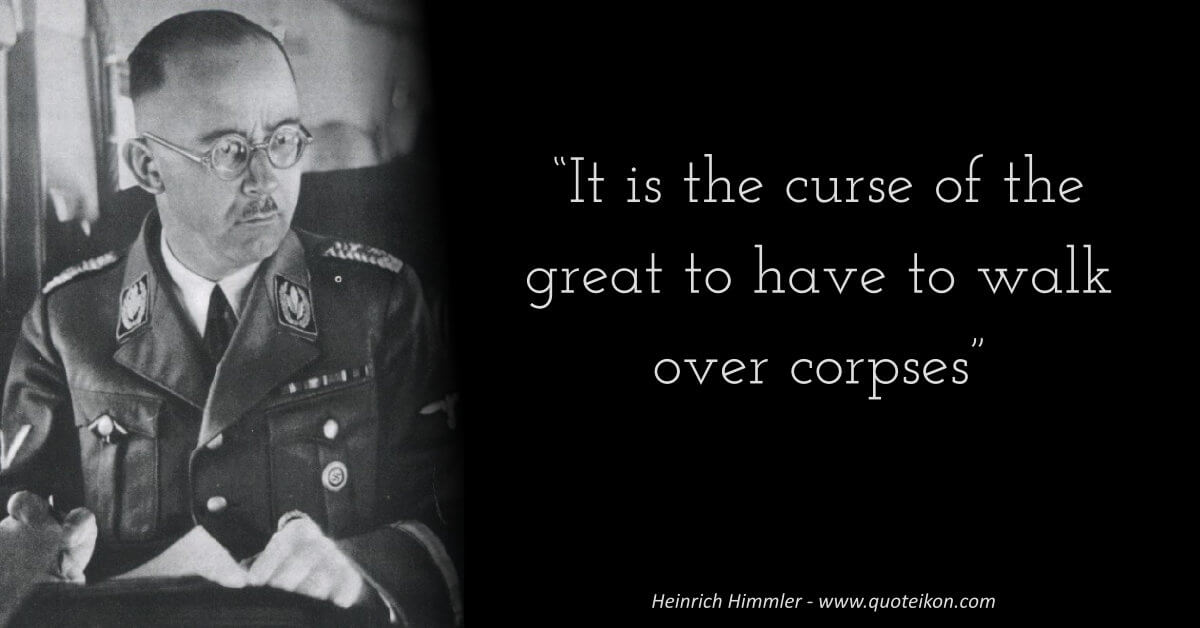