The story of Karen Carpenter is one of tragic pathos glossed over by her silken contralto voice that catapulted her sibling double act with Richard to the top of the charts for more than a decade of fame without the notoriety of the usual excesses of rock and roll.

The Carpenters exuded a positive vibe in a feel-bad era rife with stories about the Vietnam war and civil rights issues and even President Richard Nixon was so impressed with their feed good factor that he invited them to the Whitehouse to sing for him and German Chancellor Willy Brandt in 1972.

As the decade progressed the hits kept coming with "For All We Know", "Rainy Days and Mondays" and "Superstar" all charting high in the billboard 100.

Professionally, the combination of Richard with Karen Carpenter seemed like a match made in musical heaven, Richard was an accomplished writer of songs and an excellent musical arranger, but he lacked the star quality that his sister oozed, Karen had the voice and a haunted look that matched the cool contralto singing vocals she emitted so effortlessly, there was an intimacy which seemed unique to the gifted singer.

By the mid 1970's there was some concern about Karen's physical well being, concerts were being cancelled and there were questions about her being emaciated. She grew up into a family that viewed her brother Richard as the talented musician who would gain recognition and stardom so it came as a surprise to both Karen's parents and Richard that she was actually the most commercially viable singer and musician in the family. The Carpenters kept going with Karen seemingly concordant with their career path in what was a pressurised job in the public gaze without the recognition or understanding of the mental and physical anguish she was suffering.

Karen was suffering from anorexia nervosa in an age that did not fully comprehend what that meant or even the severe consequences long term suffering could cause to the human body. At the relatively young age of 32 Karen Carpenter's fight with anorexia was over, she died of heart failure brought on by years of suffering from the eating disorder, her sad demise increased awareness about anorexia and eating disorders which has contributed to saving many lives as it was brought into the public consciousness.

In an industry renowned for excessive overindulgence it was ironic that a singing superstar like Karen Carpenter could fall victim to under-indulgence that seemingly played out in the melancholic melodies her velvety voice so effortlessly shared with an adoring nation.

Karen Carpenter had a distinctive and unique voice that provided an easy listening alternative to the hard rock screeching bands of the 1970's, her dulcet tones of vocalised honey swept gently out of speakers to caress the ears and stroke the mind with an ambrosial warmth of gentle stimulation. Off stage she usually left all the talking to her brother but she still found time to contribute some interesting comments which I have compiled into this list of 18 of the best Karen Carpenter quotes.

The journalist Rob Hoerburger gave this sad assessment: "If anorexia has classically been defined as a young woman's struggle for control, then Karen was a prime candidate, for the two things she valued most in the world – her voice and her mother's love – were exclusively the property of her brother Richard. At least she would control the size of her own body"

Paul McCartney once described her as having: "The best female voice in the world: melodic, tuneful and distinctive"

Herb Alpert the co-founder of A&M Records said this of the sibling's working relationship: "Richard knew how to get the most out of Karen’s unusual talent. He knew how to ... not necessarily manipulate her, but how to work with her"

The singer Linda Perry shared these ponderable thoughts: "I feel that there was something bigger . . . We will probably never know what was going on, because Karen’s voice had too much soul, too much heartbreak, too much pain in it to be just an insecurity"

The biographer Randy L. Schmidt shared this observation: "It was Karen’s voice, I’d never had a voice touch me so deeply and at such a young age, it was so unusual. There was just some sort of connection that I still haven’t had with any other artist. There are lots of singers that I like to listen to, but there’s never been one that has touched the same depths that Karen has and continues to do"

The singer Petula Clark recalled this anecdote: "I was with Karen Carpenter in Vegas. We were invited to Elvis's dressing room and I had to drag her away. She was such a sweet girl but I could see what was going on. I met him a few times after that, and he flirted very heavily with me. I was supposed to do a movie with him and that was stopped right away by my husband"

Her brother Richard Carpenter lamented: "Have you ever lost a brother or a sister? I hear the only thing that's worse is losing a child, which I can well imagine. That great voice, that great lady, gone at 32. I don't see any rhyme or reason for it"

Former band member John Bettis recalled: "Anorexia nervosa was so new that I didn't even know how to pronounce it until 1980. From the outside the solution looks so simple. All a person has to do is eat. So we were constantly trying to shove food at Karen" 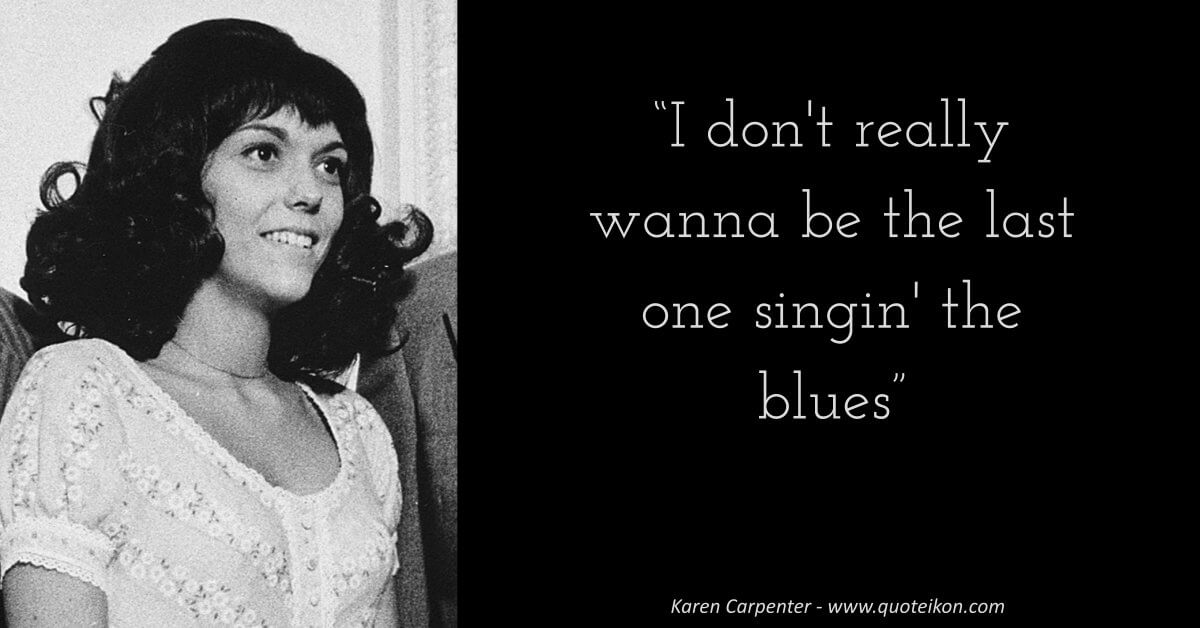