Paul Newman was the quintessential good looking boy turned actor who started making waves in the movie industry after his 1958 role as Brick Pollitt in the hit movie Cat On A Hot Tin Roof, it earned him an academy award nomination and suddenly his acting skills were being recognised and he was becoming more than a pretty face in auditions.

The 1960's proved to be the making of Paul Newman the actor as the star roles and the accolades kept on coming with another three Oscar nominations in The Hustler (1961), Hud (1963) and Cool Hand Luke (1967). He ended the decade on a high with the box office blockbuster Butch Cassidy And The Sundance Kid in 1969 which also saw his first collaboration with Robert Redford.

The 1970's saw Newman consolidate his place as a Hollywood star with a string of successful movies such as The Sting (1973) and Towering Inferno (1974). The 1980's was a decade when the critical acclaim was ratcheted up a notch with The Verdict (1982) and his Oscar winning performance in The Color of Money (1986).

Away from the silver screen he was an avid petrol head as a successful race car driver and later racing team owner. On the domestic front he had a solid marriage to Joanne Woodward which saw them achieve their golden jubilee wedding celebration after 50 years of wedded bliss.

He was on the infamous Richard Nixon enemies list where he made the top 20 by coming in at number 19 of the republicans administration enemies list. He regarded this as one of his greatest achievements. Then there was the philanthropy, he had his own food brand called Newmans Own and he donated all profits to charity. In between his hectic life he was always good for a one liner so here is my list of 20 of the best Paul Newman quotes.

The playwright William Goldman described his thespian ways: "He makes it look so easy, and he looks so wonderful, that everybody assumes he isn't acting"

The actress Elizabeth Taylor spoke fondly of her old friend: "I loved that man with all my heart. He was goodness and kindness and pure integrity. Knowing him, being his friend, was as golden as the sunset and a privilege I’ll never forget"

The acclaimed actress and his wife Joanne Woodward made this observation: "Paul likes to test himself. That's what makes Paul run. He's got a lot of courage, a highly underrated element in people's lives these days"

The novelist Gore Vidal was impressed to say: "He has a good character, and not many people do. I think he would rather not do anything wrong, whether on a moral or an artistic level. He is what you would call a man of conscience - not necessarily of judgment, but of conscience. I don't know any actors like that" 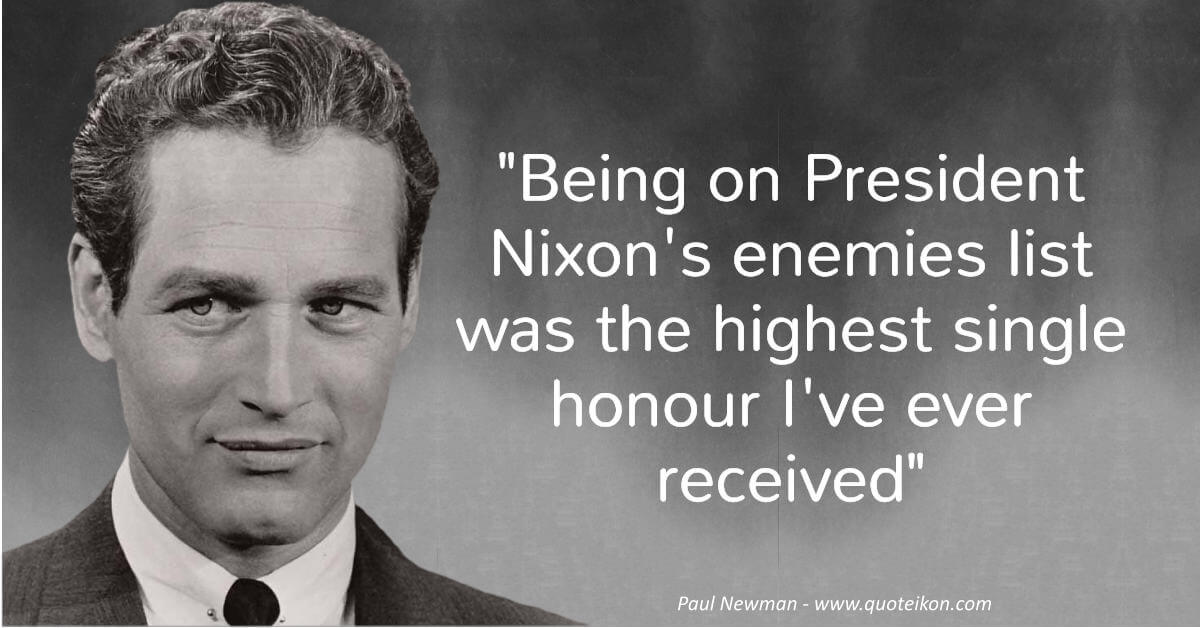