Born to a political dynasty Indira Gandhi grew up in an atmosphere of philosophical thinking geared towards Indian independence and leading the nation out of the clutches of its colonial masters. Her grand father Motilal Nehru was a leading activist and a former president of the Indian National Congress and her father Jawaharlal Nehru was the Indian nationalist who with Mahatma Gandhi at his side led India to independence becoming the country's first Prime Minister in 1947.

Jawaharlal Nehru went on to lead the country for 17 years until his death in 1964 when Lal Bahadur Shastri stepped in to lead the party and become the 2nd Indian Prime Minister. Just two years later the Nehru dynastic clan were back in the Indian hot seat of power after the death of Shastri as the INC selected Indira Gandhi to become the country's 3rd Prime minister and the first female elected as leader.

Some chauvinistic elements in the hierarchy of the INC had expected Indira to be an easy touch and being a lady easily influenced, they were in for a shock as the new PM spent the next few years stamping her authority on the government, inspiring the nation and establishing her supremacy within the party.

In a dsiplay of political cunning Gandhi outmanoeuvred her party rivals using populist policies of nationalising 14 of the largest banks in India and her proposed abolition of the privy purse which was a hitherto agreed payment to the former regional rulers of the Princely states. The resultant disharmony in the party caused a rift which Indira exploited to the full as the majority of party members backed her giving her the opportunity to purge the INC of all her rivals.

After winning the 1971 election Indira Gandhi galvanised her growing reputation as a strong leader with a decisive victory over Pakistan in the Indo-Pakistan war that led to the formation of the independent state of Pakistan. As a leader it seemed she could do no wrong and this gave her an irrational conception of her power which gave way to complacency as she took her finger off the pulse of the nation and failed to recognise growing discontent.

In 1971 the opposition party led by Raj Narain had accused Gandhi of election malpractice and fraud, this case finally came to court in 1975 and although no fraudulent activities were proven she was found guilt of election malpractice because she used state funds during her election campaign. The fallout saw Gandhi stripped of her seat and banned from parliament to which she responded by lodging an appeal to the high court and continuing as normal which caused civil unrest. Gandhi regained full control by putting the country under a state of emergency and imprisoning her opponents.

The state of emergency continued for two years during which the suspended civil liberties and strict censorship of the press gave Indira a false feeling of confidence as she began to believe her own biased headlines and thought she still had the support of the country. In a bid to legitimise her rule she called a general election in 1977 and the discontent bubbling under the mask of censorship saw Indira Gandhi lead the INC to a shock loss and a painful fall from grace for the daughter of Jawaharlal Nehru.

The newly elected Jalatan Party was a coalition united only in opposition to Indira Gandhi, they lacked a political compass to guide them away from the in-fighting which predictably played out as a party devoid of common policy they could agree upon.

The 1980 election saw Indira Gandhi swept back into power by an electorate going back to the tried and more trusted party in comparison to the politically rudderless previous administration.

In the early 1980's political and religious tensions were rising in the Punjab with Sikh religious leader Jarnail Singh Bhindranwale becoming more extremist and immersing himself in politics to achieve an autonomous state for Sikhs. Bhindranwale was wanted for the murder of a rival and sought sanctuary in the Golden Temple of Amritsar and with the police reluctant to enter the religious complex for fear of causing offence to the Sikhs. An uneasy stand off began which was further fueled by the Sikh militants bringing heavy weaponry into the complex and after protracted negotiations proved fruitless Indira Gandhi lost patience and ordered the army to storm the holy shrine to the Sikh religion.

The ensuing battle saw high casualties and damage to buildings within the complex as the army wrestled control away from the militants. It also built up resentment in the Sikh community with many resigning their posts in the army and civil service. It also led to the assassination of Indira Gandhi as two of her Sikh body guards mowed her down in a hail of bullets fired from close range.

One day after her assassination her son Rajiv Gandhi was made prime minister as the Nehru dynasty continued to flourish in an India that has since independence seen members of their family in power for a total of 37 years and 303 days.

Indira Gandhi lacked the vision and the deep thinking pragmatism of her father but she proved a determined leader that displayed a shrewd political instinct that kept her in power for 15 years. She was a tough Prime Minister whose mettle earned her the nickname the "Iron Lady Of India" as her single minded approach to government gave the country much needed direction in a time of turbulence in Indian politics.

She gave her gender political recognition by becoming the world's second female Prime Minister after Sri Lankan Sirimavo Bandaranaike first attained that level of office in 1960. Her passion for politics never waned as her vocation devoted to the affairs of state breathed life into her impassioned speeches that communicated her message to the people and gave a rich source of material to compile my list of 20 of the best Indira Gandhi quotes.

Her father Jawaharlal Nehru wrote from his prison cell for her 13th birthday: "Good bye, little one, and may you grow up into a brave soldier in India’s service"

The activist Nanaji Deshmukh gave this assessment: "In the end, Indira Gandhi has earned her name as a great martyr on the doorsteps of history. With her courage and efficiency, she demonstrated that only she understood the realities of our corrupt and divided society and was capable of uniting the country dominated by rotten politics. She was a great woman and in her valiant death, she has become greater"

The politician Dev Kant Barooah described her thus: "India is Indira and Indira is India"

Her son Rajiv Gandhi spoke of the violent aftermath following her assassination: "When a big tree falls, the earth shake"

The muslim social reformer Hamid Dalwai shared this observation: "The unceremonious exit of Mr. M.C. Chagla from her Cabinet and the relaxation of the rule prohibiting polygamy among Muslim employees of the Central Government are but two examples of the concessions she is making to Muslim communalism"

The author Pankaj Vohra described her tenure and political impact: "Even the late prime minister's critics would concede that the maximum number of legislations of social significance was brought about during her tenure... and that she lives in the hearts of millions of Indians who shared her concern for the poor and weaker sections and who supported her politics" 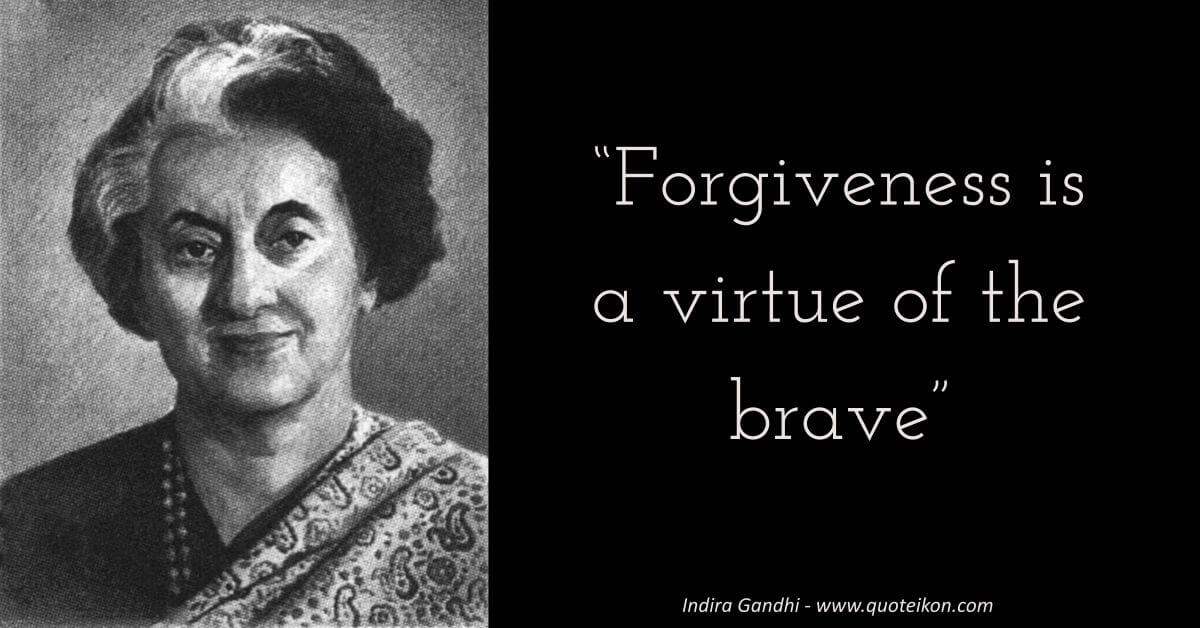