During her 1960 election campaign she won the hearts of the electorate with her emotional speeches despite the opposition branding her the "Weeping Widow" and not politician material let alone prime ministerial.

After winning the 1960 election for her party the Sri Lanka Freedom Party, Sirimavo R.D. Bandaranaike became the first democratically elected female prime minister the world had ever known.

She went on to be elected three times as prime minister in a political career spanning 40 years until her death in 2000. As a stateswoman of high regard finding quotes by her was not a challenge so this is my compilation of 12 of the best Sirimavo R.D. Bandaranaike quotes, I hope you enjoy them.

In 1960 a Ceylon paleontologist Paul Pieris Deraniyagala got this prediction very wrong: "What does she know of politics? In Solla's time, Sirima presided over nothing fiercer than the kitchen fire. She'll end by spoiling her personal reputation and ruining the family name"

The Sri Lankan historian K. M. de Silva paid her this tribute: "Mrs. Bandaranaike's legacy is this: After her husband died, there was so much confusion and the party was almost collapsing. She was an untried leader. But she not only survived, she sustained the party and the family in politics"

The Sri Lankan poet Yasmine Gooneratne described her as: "the most formidable and charismatic leader the country has ever seen"

The journalist D.B.S. Jeyaraj made this observation: "There is no denying that Sirima Bandaranaike was an incorruptible figure. Her financial integrity has been beyond reproach"

The Sri Lanka Freedom Party issued this statement: "She was a heroic mother of the nation" 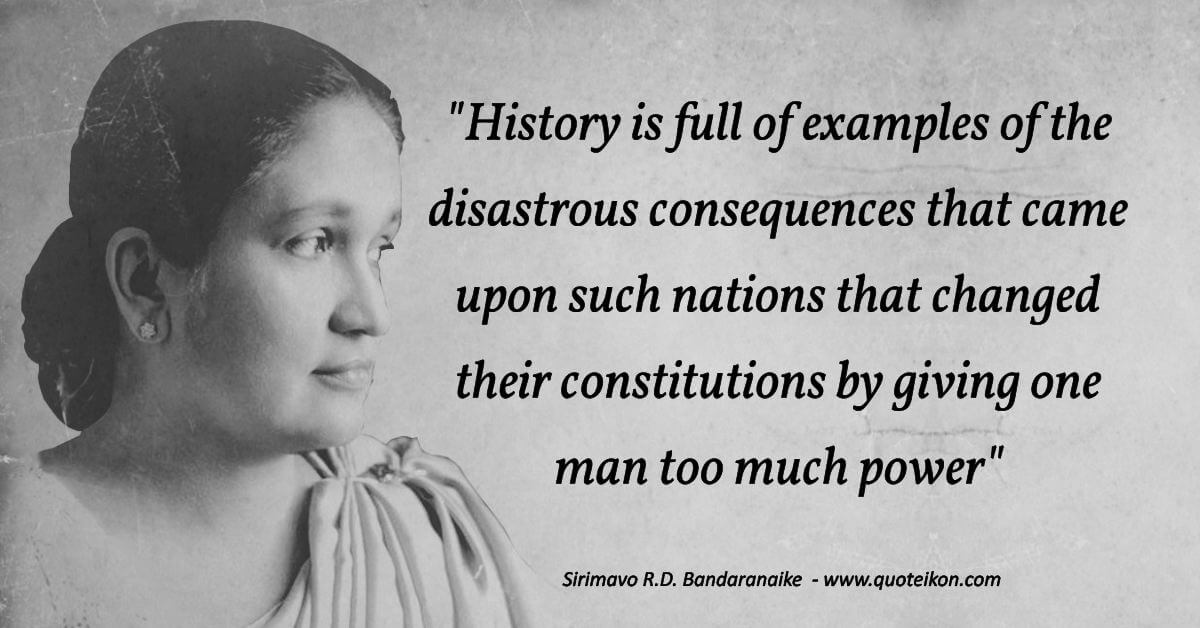