He was a poet, a playwright and a politician. He was also a peer, a philanderer and a philanthropist. He is possibly France's most famous literary son. His name is Victor Hugo and he has penned such classics as 'The Hunchback of Notre Dame' and 'Les Misérables' to name but two.

Internationally, Victor Hugo is a renowned novelist and dramatist, yet he is best remembered in his native France as a poet. In 1822 he published his first serious poetic output 'Odes et poésies diverses' which impressed Louis XVIII enough to award him a royal pension.

The poetry of Hugo again hit the mark with his 1826 publication of 'Odes et Ballades' which enhanced his reputation as a lyrical and elegiacal genius. By 1840, five more volumes of poetic excellence would flow though the pen of Hugo and he now stood shoulder to shoulder with some of the historical greats of literature.

Not content with making his name as a poet, Victor Hugo published in 1831 the critically acclaimed gothic novel 'Notre-Dame de Paris'. The English version was published in 1833 as 'The Hunchback of Notre-Dame', which went on to be a worldwide success and has been adapted to movies on 15 occasions. There are numerous other adaptations of 'The Hunchback of Notre-Dame' to theatre, opera, ballet, television and even comics.

Hugo was also an activist who campaigned on human rights issues. His liberal leaning can be derived from his exploration of poverty in his literature such as the peasant Jean Valjean who was jailed for stealing bread in 'Les Miserables'. From the same novel, there was the sorry tale of Fantine who sold her hair and two front teeth, the poor girl was forced to turn to prostitution in order to survive.

Hugo entered politics and was elected to the National Assembly of the Second Republic in 1848. He pushed for social change by promoting the idea of eradicating poverty and championing the cause of free education for all children. He became a thorn in the side for the conservative thinking political elite.

As a politician Hugo became embroiled in the battle to end the death penalty. He also gave eloquent speeches advocating universal suffrage much to the angst of his fellow party members.

Victor Hugo also denounced the ambitious Louis Napoleon. In December 1851 Hugo was forced to flee France after a coup d'état led by Louis that saw him elevated from the President of France to the Emperor of the French and to be known as Napoleon III.

Hugo initially took refuge in Brussels but decided the Belgians may want to appease Napoleon III so he left for the island of Jersey in 1852. His support for a satirical article about Queen Victoria's visit to Paris in a Jersey newspaper saw him expelled from the island in 1855. Hugo left for another island in the English channel, Guernsey.

Victor Hugo spent the next 15 years on the island of Guernsey. This proved to be one of the most productive periods of his literary career. The inkwell of his Gallic guile was in full flow as he completed 'Les Miserables' in 1862 and penned other classics such as 'Les Contemplations' (1856), 'Les Chansons des rues et des bois' (1865) and 'Les Travailleurs de la mer' (1866).

Les Miserables was a labour of love for Victor Hugo. He first put pen to paper on the novel in 1845 and through the years he found writers block and procrastination a major obstacle to completion. To remove distraction he would sit naked in an empty room with nothing but a pen and paper. His servants were instructed not to return his clothes until there was significant written input.

In 1859 Napoleon III announced an amnesty for all political exiles. Hugo refused on the grounds he would have to compromise his staunch critical opinions of the government. Victor Hugo had to wait until 1870 before he could again set foot on French soil. It was the demise of Napoleon III as the last monarch of France and the rise of the Third Republic that saw Victor Hugo return to Paris and given a welcome fit for a hero.

His domestic life seemed blissful considering he spent 46 years married to his wife Adele Foucher until her death in 1868. Both committed adultery with Victor displaying an insatiable lust for the pleasures of the flesh. Hugo had many affairs including his long-standing liaison Juliette Drouet who was his mistress for nearly 50 years.

Before his death Victor Hugo left instructions to be interred in a paupers coffin. He died in 1885 and was granted his wish. Such was the level of national mourning that the French president Jules Grévy awarded him a state funeral. His coffin lay in state beneath the Arc de Triomphe until his burial in the Pantheon on 1st June 1885.

It is estimated that some 2 million people paid their final respects during the funeral procession, even the brothels of Paris closed for the day as a mark of respect to a once-loyal client. He is in good company in his final resting place as Victor shares a crypt with fellow literary greats Émile Zola and Alexandre Dumas.

His legacy as one of the giants of French literature has been immortalised throughout France and around the world with statues, street names and parks being named after him. Before the emergence of the Euro his portrait adorned the front of the French 5 Franc note and he is even revered as a saint in the Vietnamese religion of Cao Đài.

More than a leading light in literature he is regaled as a champion of the poor for his unrelenting stance on the eradication of poverty. His eloquent way with words charmed me during my research for this list of 30 of the best Victor Hugo quotes.

The author Upton Sinclair described Les Misérables as: "One of the half-dozen greatest novels of the world"

The French poet Jean Cocteau described him thus: "Victor Hugo was a madman who thought he was Victor Hugo"

The historian Thomas Carlyle called him this: "A glittering humbug"

The poet Charles Baudelaire shared this observation:"Hugo, like a priest, always has his head bowed -- bowed so low that he can see nothing except his own navel"

The philosopher Jean-Paul Sartre was positive with this summation: "Hugo, optimism incarnate, the vatic poet, recognised by God as the only worthy interlocutor, the courageous defender of the Communards"

The artist Vincent Van Gogh reminisced thus: "It is very beautiful, that figure of Monseigneur Myriel or Bienvenu I think sublime....It is good to read such a book again" 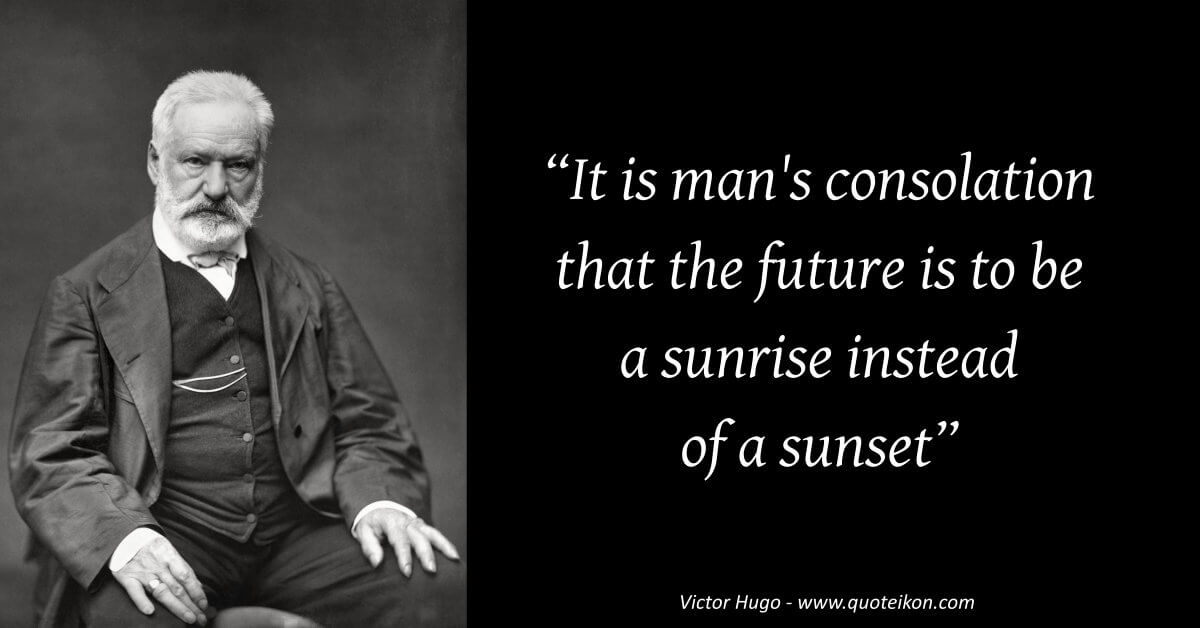